Governor on guns: Gov. Michelle Lujan Grisham spoke on Friday about proposed gun legislation, saying it’s possible to protect Second Amendment rights as well as improve public safety. “My message is we have an opportunity to do both,” she told reporters. “Why wouldn’t we?”

Lujan Grisham has put on her agenda an initiative, filed as House Bill 7 and Senate Bill 5, that would allow for extreme-risk protection orders, letting law enforcement obtain a court order to remove guns from people considered dangerous.

Best of both worlds? Lujan Grisham also spoke about 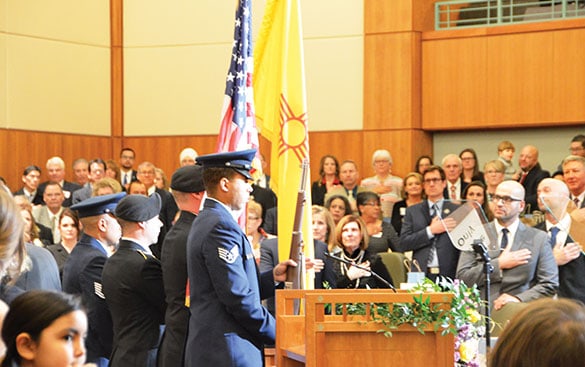 Members of the New Mexico National Guard present the colors as the 2020 Legislative Session gets underway Tuesday in Santa Fe. Photo by Carol A. Clark/ladailypost.com 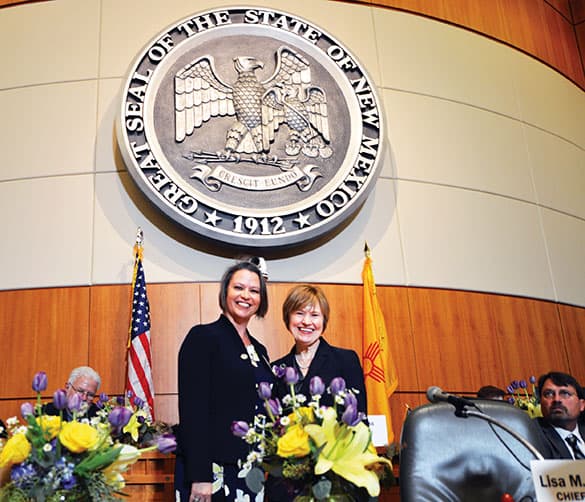 New Mexico Commissioner of Public Lands Stephanie Garcia Richard and Dist. 43 Rep. Christine Chandler, both of Los Alamos gather for a photo at the opening of the legislative session Tuesday at the Roundhouse in Santa Fe. Photo by Carol A. Clark/ladailypost.com

SANTA FE – The 30-Day Session of the 54th New Mexico Legislature got underway Tuesday at the Roundhouse. 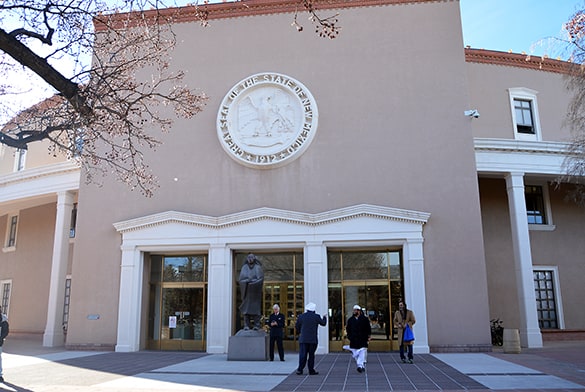 The Roundhouse in Santa Fe. Photo by Carol A. Clark/ladailypost.com

By DANIELLE PROKOP
The New Mexican

Democrats in the state Senate say they still don’t have enough votes to repeal an old, unenforceable abortion ban that remains in New Mexico law.

They believe a failed effort in the 2019 legislative session — when a handful of conservative Democrats joined Republicans to block it — could see the same results in this year’s 30-day session.

But with the U.S. Supreme Court poised to hear a Louisiana case that is expected to test the landmark 1973 decision in Roe v. Wade, Senate Democrats and

Tesuque Pueblo is actively pursuing plans to turn its old Camel Rock Casino into a film production facility after the space was used last year for the movie production of News of the World, starring Tom Hanks.

The Pueblo of Tesuque Development Corp. is in talks with scouts for film and television companies about using the location for future productions, said Timothy Brown, the entity’s president and CEO. The former casino, located off U.S. 84/285, could be used on a short- or long-term basis or rented to a major production company, he said.

Bring out the guillotines: Climate activists rallied outside the Roundhouse prior to the governor’s address Tuesday, demanding action on global warming and an end to fracking. Amid a crowd of around 100 people, there was drumming, and one protester, Bobbe Besold of Santa Fe, danced while holding a giant skeleton and a sign that read “Extraction is Extinction.”

At one point, activists placed three young people’s heads in three fake guillotines, with angled blades held up by ropes attached to blocks of 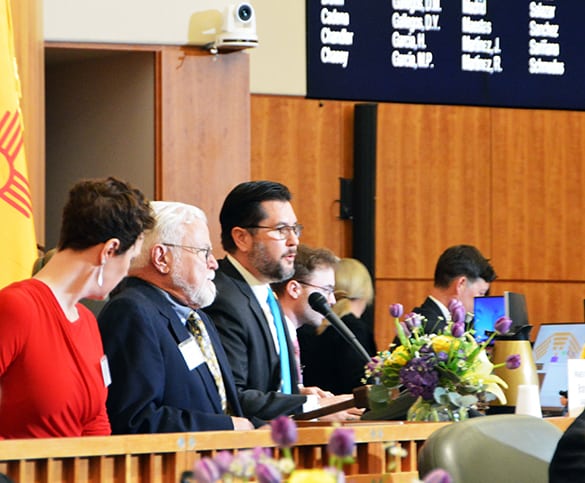 Speaker of the House Brian Egolf opens the 30-Day Session of the 54th New Mexico Legislature Tuesday at the Roundhouse in Santa Fe. Photo by Carol A. Clark/ladailypost.com.

Focused on passing a responsible budget that continues investing and uplifting a generation from poverty through education, House Democrats are also committed to securing a better future through economic diversification 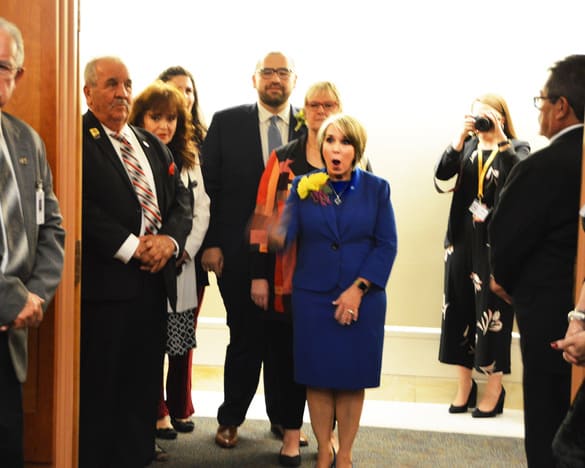 Gov. Michelle Lujan Grisham enters the House Chamber this afternoon at the Roundhouse to deliver her State of the State Address. Photo by Carol A. Clark/ladailypost.com 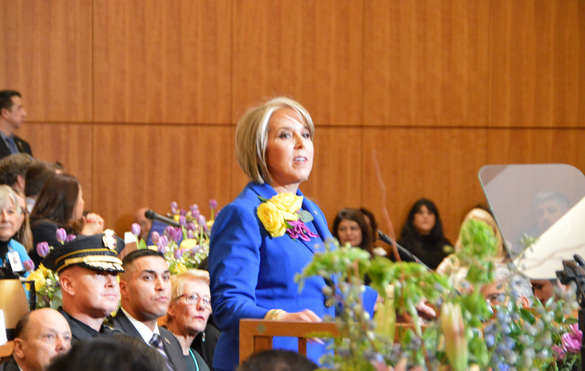 Gov. Michelle Lujan Grisham delivers her State of the State Address this afternoon before a joint session of the House and Senate at the State Capitol. Photo by Carol A. Clark/ladailypost.com

An organization that represents New Mexico county governments is pushing the state Legislature to increase reimbursements to counties for the rising costs of transporting state prisoners and providing behavioral health care to state inmates housed in county jails and youth centers.

The Santa Fe-based nonprofit New Mexico Counties is seeking a more than $6 million increase to the County Detention Facility Reimbursement Fund, which now stands at $2.3 million a year.

Governor, Staff Gear Up For State Of State Address

On the roughly eight-hour flight from Chicago to Dublin, Ireland, Gov. Michelle Lujan Grisham’s speechwriter and top communications staffer started a draft of what will be her second annual address to the Legislature.

Six hours and 6,000 words later, Tripp Stelnicki closed his laptop and braced himself to meet his sister’s fiancé in Ireland.

Since then, Stelnicki said, the document has run the gantlet, viewed and honed by the governor’s chief of staff, John Bingaman, senior adviser Dominic Gabello and the governor

In the beginning: The 54th annual legislative session begins at noon today at the state Capitol on the corner of Paseo de Peralta and Old Santa Fe Trail.

Gov. Michelle Lujan Grisham is scheduled to give her State of the State address outlining her initiatives on the floor of the House of Representatives, though that event generally occurs later in the afternoon.

Musical political chairs: The Senate’s Committee on Committees meets at 10 a.m. Tuesday in Room 326 to discuss assignments. Members will choose a successor for Sen.

The delegation also requested DoD work on plans to purchase 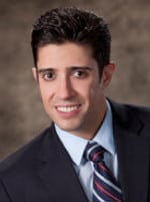 “Education is the most powerful weapon, which you can use to change the world,” Nelson Mandela said.

More than anytime in history, we must heed his advice and make basic changes to our education system if we are going to maintain our economic and moral leadership around the world.

The United States entered the 21st Century as the world’s sole superpower. We had the third-largest population with 327 million people, the largest economy and the second-largest higher-education system.

As recently as 20 years ago, the United States was ranked No.

ALBUQUERQUE — The Rio Grande Chapter of the Sierra Club Friday issued its early 2020 endorsements of incumbent legislators who are leading environmental champions, including Dist. 43 Rep. Christine Chandler of Los Alamos.

“The candidates on this list have sponsored critical environmental legislation and have outstanding voting records over the last three years on pro-environment bills. They have proven they are committed to protecting our climate, water, land and wildlife here in New Mexico,” said Richard Barish, Sierra Club Rio Grande Chapter political chair.

New Mexico Ethics Watch (NMEW), a nonprofit dedicated to promoting ethics in governance and public life, has released its report, Lobbyists and Their Outsized Influence in New Mexico: Tales of Film, Firearms and Fumes.

The report takes a fresh look at lobbying and the New Mexico Legislature, examining monies spent and tactics used to influence votes regarding legislation on cannabis, firearms, film and tobacco-related products.

Using data from the Secretary of State’s Campaign Finance Information System (CFIS), the report paints a picture of the lengths to which lobbyists 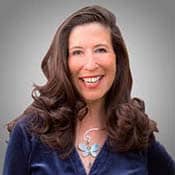 Editor’s note: This is the eighth in a series in which the Los Alamos Daily Post presents the same set of questions to each of the candidates running for Congressional District 3, which serves the northern half of New Mexico.

POST: Why do you believe you are qualified to represent New Mexico in Congress?

LEGER FERNANDEZ: I have spent the past 30 years working with and on behalf of our communities

He issued the following statement:

“I am glad that Democrats have included significant improvements for workers to the weaker agreement that was negotiated by the Trump administration, and I hope today’s vote will put President Trump’s chaotic and harmful trade policies behind us—at least when it comes to our southern border. New Mexico’s growing border economy is a bright spot for our state, and I believe 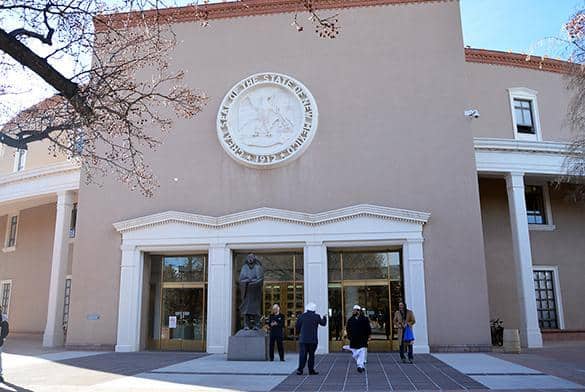 The 2020 legislative session begins noon Tuesday at the Roundhouse. Photo by Carol A. Clark/ladailypost.com

Mix hundreds of legislative bills, resolutions and memorials into a 30-day legislative session designed to focus on the budget and you’ll likely come up with a recipe for some prioritizing, lots of stalling and some surprise winning bills breaking out in the final minutes.

Gov. Michelle Lujan Grisham has announced an agenda for this year’s legislative session that focuses on education, the environment, public safety and health.

All 15 members of the Compulsive Gambling Council are appointed by the governor and serve at her pleasure.

The positions that need to be filled include: 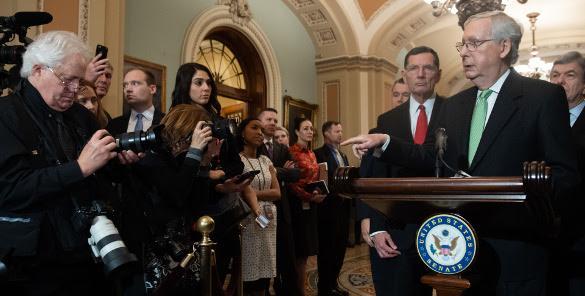 Reporters Without Borders (RSF) strongly condemns the restrictions the Senate Sergeant At Arms and the Senate Committee on Rules and Administration are imposing on Capitol Hill reporters during the impeachment trial for President Donald Trump.

RSF calls on the Senate Majority Leader to reverse these rules immediately.

Members of the press covering the Senate impeachment trial of President Trump, which began Jan. 16, are facing new “security measures” in the form