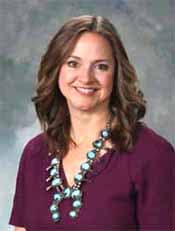 A leading Republican lawmaker and gubernatorial hopeful has introduced a bill to prohibit the state from including critical race theory — a controversial and often-misunderstood concept that is seen by some as a potential electoral wedge issue — in New Mexico’s school curriculum.

Rep. Rebecca Dow of Truth or Consequences said Wednesday the theory is “racist” and is being misrepresented.

“We are a state of diverse cultures, and we should be promoting the thinking of Martin Luther King Jr.  — judging people on their character and not Read More

Reilly: We Have A Lawyer Problem…

We have a lawyer problem. It’s not just too many; it’s where they are and what they’re taught.

The American Bar Association says there are four lawyers for every thousand people; that’s 0.4 percent. The percentage of lawyers in our congress is 40 percent. Imagine if we had a representative distribution of work categories in congress.

Congress would have almost no lawyers; however, It would have more agriculture, manufacturing, and construction workers, and many more service sector workers. Physicists represent 0.003 percent of the population; it would be unlikely Read More 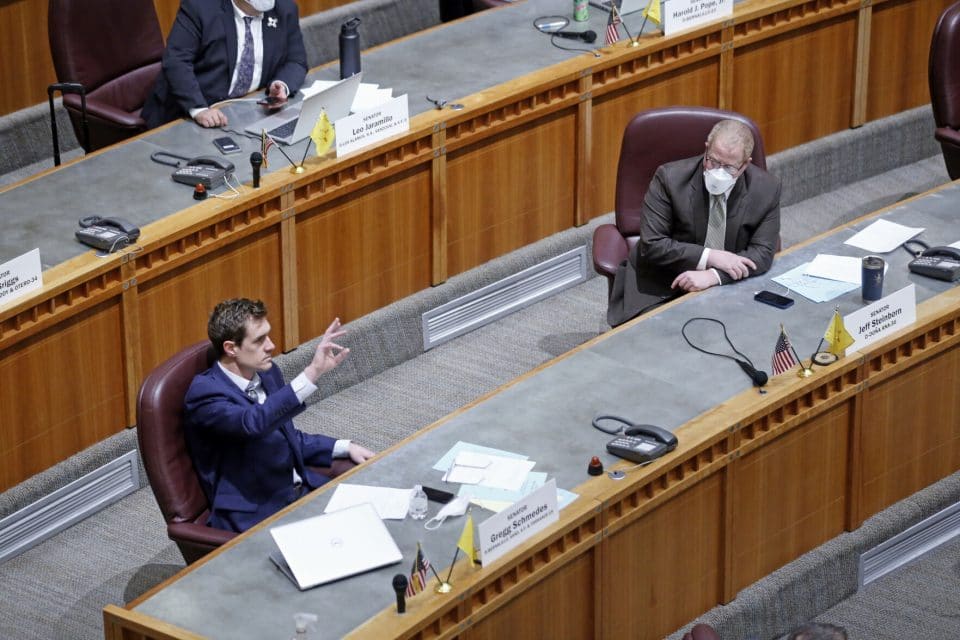 Sen. Gregg Schmedes, R-Tijeras, left, asks to speak on the Senate floor after Sen. Jeff Steinborn, D-Las Cruces, right, said wearing a mask was a ‘basic courtesy’. Schmedes said he believes masks are a ‘net harm’ and doesn’t view them as a ‘neutral courtesy’. Photo by Luis Sánchez Saturno/SFNM

Lawmakers gathered in Santa Fe for a 30-day legislative session meant to deal with budget and tax issues are supposed to be fighting on New Mexicans’ behalf.

But on the second day of the session Wednesday, members of the state Senate continued to fight over face masks. Read More 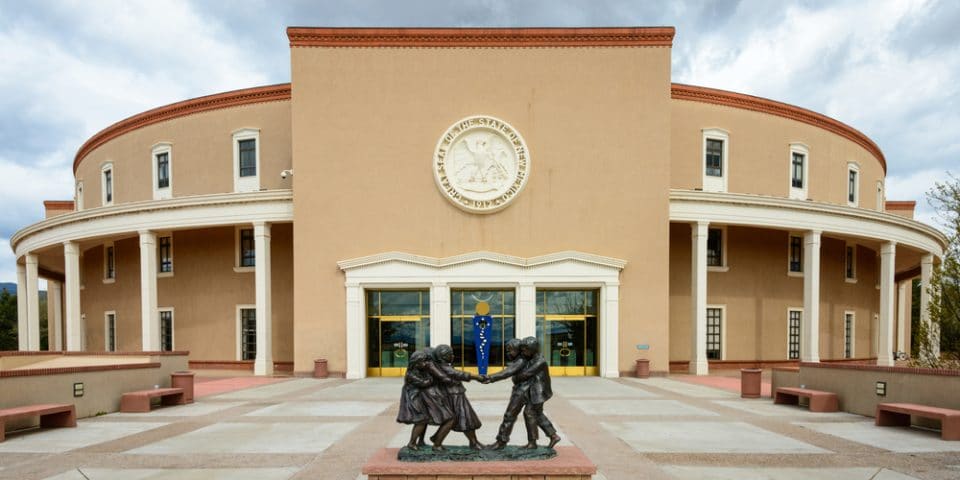 Lawmakers looking to push through an array of “tough on crime” bills got some legislative ammunition to support their cause this week.

The Legislative Finance Committee (LFC) released a memo to Rep. Patti Lundstrom, chair of the committee, saying violent crime rates are going up, and not just in Albuquerque.

The memo says at least 20 New Mexico communities — including Gallup and Albuquerque — have experienced increases in violent crimes.

Santa Fe was not among those cities.

Santa Fe Veterans for Peace (SFVP) invites the community to Ashley Pond Park 1-3 p.m. Saturday, Jan. 22 to celebrate the first anniversary of Treaty on the Prohibition of Nuclear Weapons.

Monday, SFVP paused to honor the life of the Reverend Dr. Martin Luther King, Jr., an apostle for nonviolence. A week later they celebrate the first anniversary of another milestone toward peace: the Treaty on the Prohibition of Nuclear Weapons entered into force Jan. 22, 2021.

No booster shot? Call a conservative: The president of the Rio Grande Foundation, an Albuquerque-based free market think tank, was denied entry to the Roundhouse because he hasn’t received a booster shot.

Paul Gessing was “highly surprised” his Johnson & Johnson vaccine, which he received in June, wasn’t enough to gain entry to the Capitol, according to a blog post Gessing wrote.

Proof of vaccination is required to be allowed inside the building amid ongoing concerns about the spread of COVID-19, though there are three exemptions. Read More

From the Office of U.S. Sen. Ben Ray Luján:

“Today’s vote was a defining moment for voting rights and our democracy, and Senate Republicans demonstrated once again that they want to keep Americans from the ballot box. Historically, voting rights have transcended political party, but today’s obstruction Read More

ALBUQUERQUE — The continuing COVID-19 pandemic has been hard on New Mexico’s children, families, communities, and small businesses. But not all of the hardship has been felt equally.

Families of color – Hispanic families in particular – have been hardest hit by income losses and are more likely to be having trouble paying their usual household expenses and putting enough food on the table.

That is one of the findings in the 2021 New Mexico KIDS COUNT Data Book, which was released Thursday via a virtual press conference.

This update includes 28 new deaths in New Mexico related to COVID-19 and a 7-Day positivity rate of 28.3 percent.

Per the state Department of Health, the most recent cases are:

Jones and Bartlett Learning has announced the publication of Global Population Health: A Primer by author Richard Skolnik of Los Alamos.

Global Population Health is designed to provide a brief overview of global health to a wide range of health administration and clinical audiences.

Beginning with a concise explanation of the importance of global health, this brief text moves on to examine many of the most important global health issues and their economic and social consequences. It then discusses some of the steps that can be taken to address these concerns Read More

SANTA FE – Gov. Michelle Lujan Grisham announced today “Supporting Teachers and Families” (STAF), an innovative initiative to provide critical support for New Mexico’s schools and child care facilities, which, like those in the rest of the nation, are facing extreme staffing shortages due to a surge in COVID-19 cases.

Editor’s Note: This is the 10th in a series of COVID-19 Updates by Richard Skolnik that appear bi-weekly in the Los Alamos Daily Post. These are meant to keep the community informed on the status of the pandemic, critical new findings on the pandemic, and what this information suggests for our community’s response to COVID-19. These updates complement the data that Eli Ben-Naim prepares for the Post. Unless otherwise noted, data is from the New York Times and the New Mexico Department of Health.

Hotline Opens To Report Racism And Bullying In Schools

Reports also may be submitted by text, email (hotline.bea@gmail.com) or completing a form online at  https://forms.gle/Tmt5ne1GyfSLpEw56 Read More

More than a million tests expected by next week

So far, more than 400,000 tests have been secured, with the remaining tests expected to arrive in the coming week.

“I am committed to doing everything we possibly can to get the resources needed, despite national testing shortages,” Gov. Lujan Grisham said. “I have directed the Department of Health Read More

Guard your wallet. State legislators are back in session.

They have 30 days remaining to elbow for openings to advance poorly conceived pet projects, often at enormous public expense.

William Shakespeare and Charles Dickens favored the phrase “dead as a doornail” and it has a place in this column. The literary giants also inspired the term “doornail bills” to highlight legislation that deserves to die — the faster the better.

Topping the list of bad bills for the second consecutive year is a proposal to establish a public bank in New Mexico.

Republican Response To Governor’s State Of The State 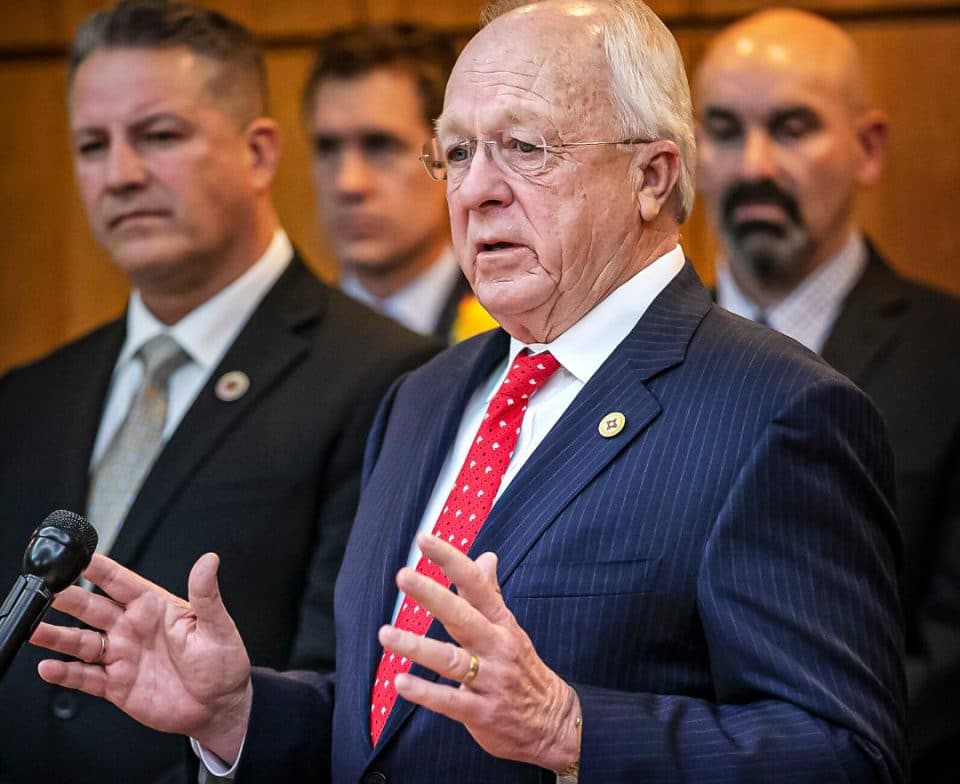 State Rep. Jim Townsend, the House minority leader, said for a second he thought the governor “almost became a Republican”.

In a news conference today at the Roundhouse after Gov. Michelle Lujan Grisham’s State of the State address, the Artesia Republican said the most “heartening” Read More

Removal effort fizzles: An effort to remove an outspoken state senator from the powerful Senate Finance Committee fizzled — at least for now.

But Senate President Pro Tem Mimi Stewart, D-Albuquerque, pulled the committee report from adoption during the floor session amid objections from Candelaria and some Republicans. 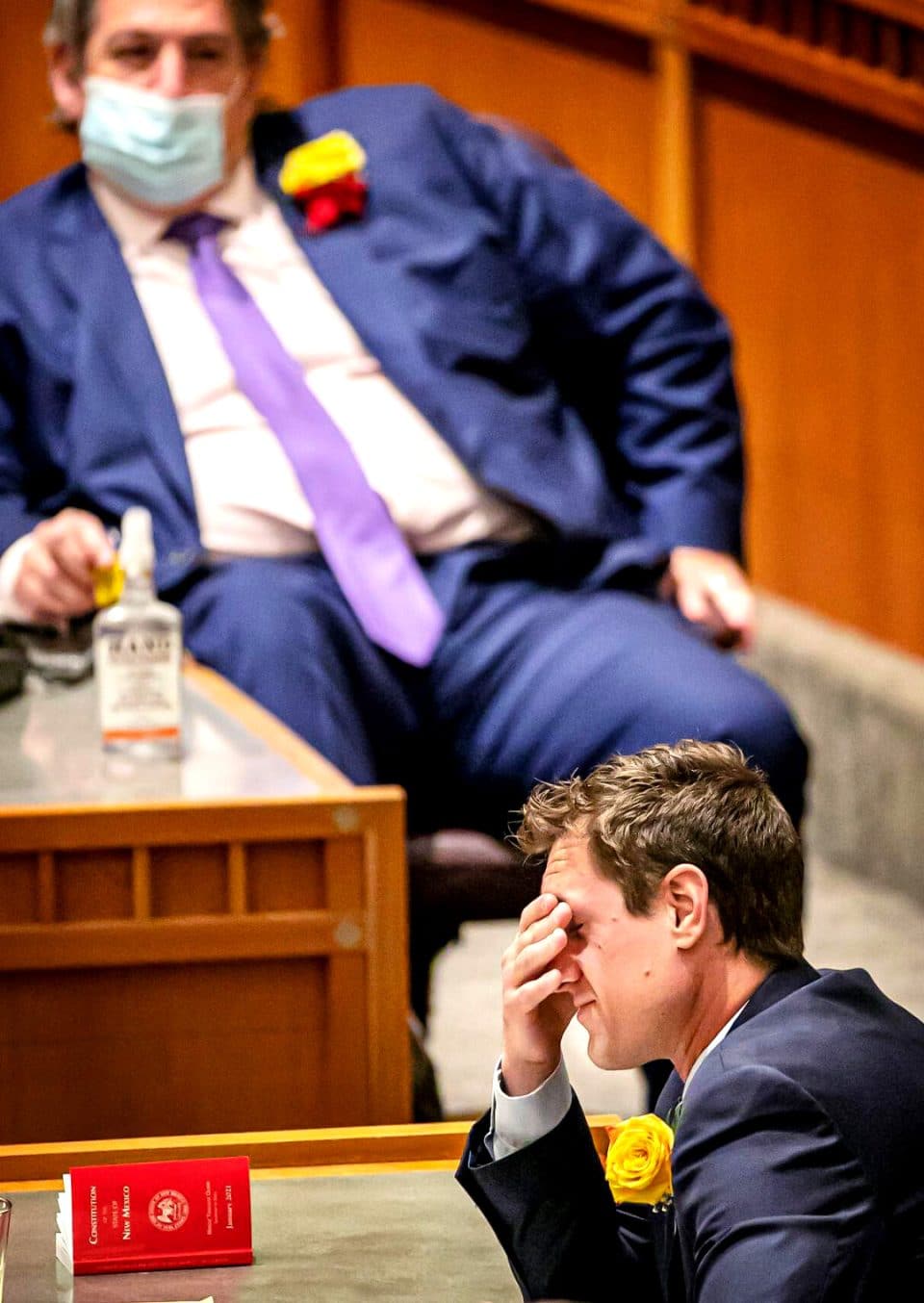 Republican Sen. Gregg Schmedes refuses to wear a mask in protest of mask mandates today during the first day of the 2022 legislative session at the Roundhouse. Jim Weber/The Santa Fe New Mexican 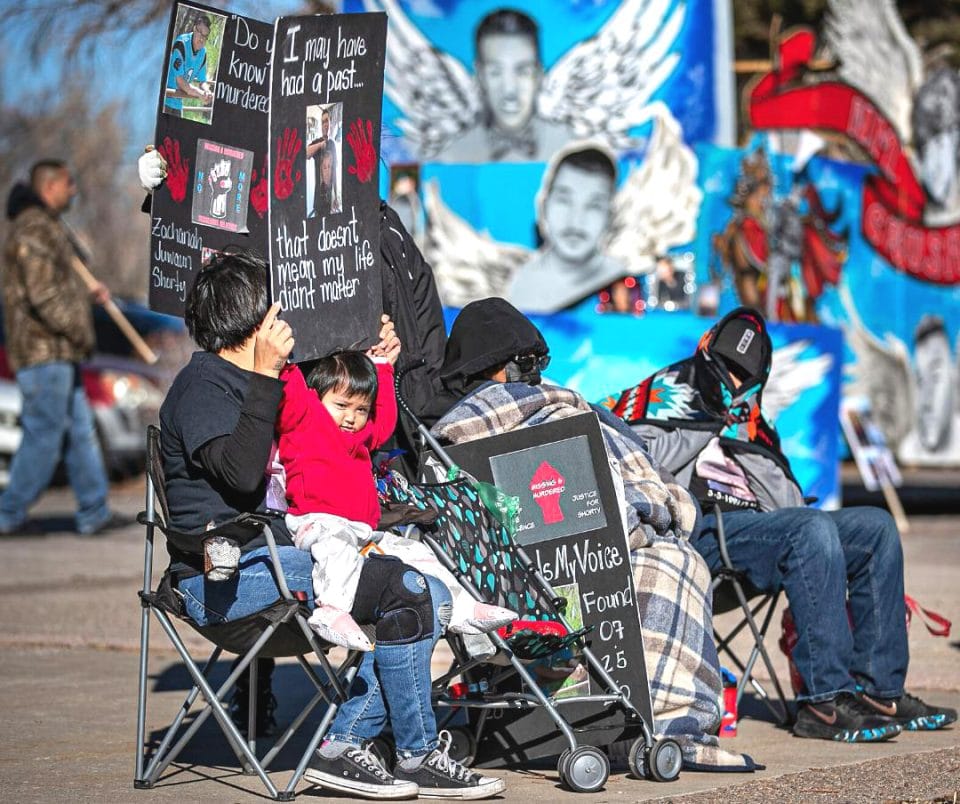 Kimberly Charley and her 1-year-old daughter Amberly Carlson demonstrate Tuesday outside the Roundhouse with other members of the New Mexico Crusaders for Justice in favor of stricter sentencing, increased police and a harder stance on crime. Jim Weber/The Santa Fe New Mexican 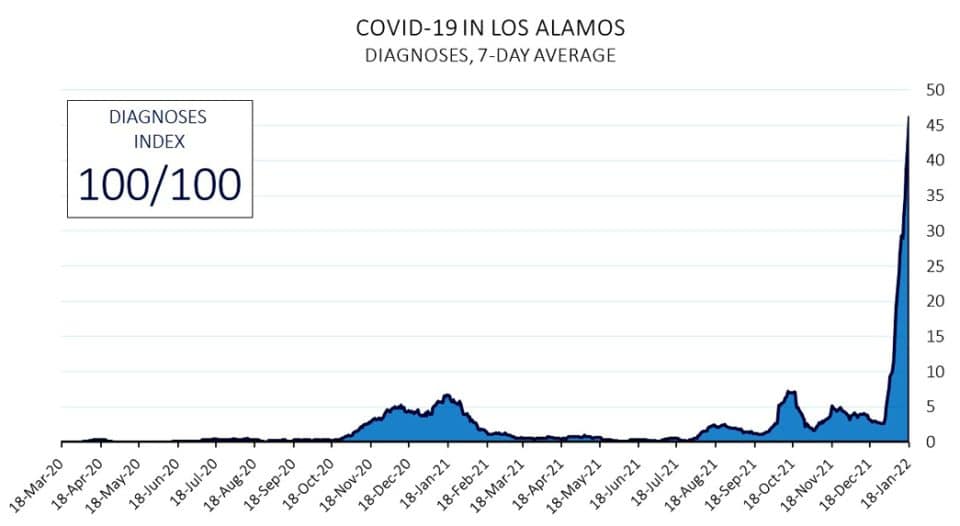 This chart shows the seven-day average number of COVID-19 diagnoses versus date in Los Alamos. On a scale of 0 to 100, the diagnoses index quantifies the current level of diagnoses by using a comparison with daily levels since the start of the pandemic (the higher the index, the more severe the current state of the pandemic is). At an all-time high, the current number of diagnoses is higher than 100 percent of preceding days. Source: New Mexico Department of Health. Created by Eli Ben-Naim
This chart shows the number of COVID-19 diagnoses by age group for the past week in Los Alamos. Source: New Mexico
Read More
Menu
Los Alamos
39°
Fair
7:10am5:25pm MST
Feels like: 30°F
Wind: 14mph S
Humidity: 31%
Pressure: 29.97"Hg
UV index: 3
WedThuFri
36/18°F
34/16°F
37/21°F
Weather forecast Los Alamos, New Mexico ▸