Submitted by Carol A. Clark on October 26, 2020
This cheerful little Junco is spotted recently lifting spirits at this warbler pond in the yard of a residence on Barranca Mesa and all over Los Alamos. Juncos, also called snowbirds because of their white tail feathers, are dark gray or brown birds brightened up by a pink bill and white outer tail feathers that periodically flash open, particularly in flight. Juncos are neat, even flashy little sparrows that flit about forest floors of the western mountains and Canada, then flood the rest of North America for winter. Juncos are birds of the ground. They hop around the bases of trees and shrubs in
Tags:
Arts Community Environment
Read More »

Submitted by Carol A. Clark on October 25, 2020
Halloween characters gather today in the yard of this residence in Northern Community. Photo by CJ Smith

The Hill Stompers performing at a Summer Concert in 2018. Photo by Bonnie J. Gordon/ladailypost.com

Twenty years ago in October 2000, the Hill Stompers held its first rehearsal around the pool table in the basement of one of its first members … and the rest, as they say, is history.

Their first gig was the 2000 Holiday Lights Parade where they played Washington Post and a handful of Christmas tunes.

Throughout the last two decades the Hill Stompers has grown from 15 to 45 fun-loving musicians and dancers. While decked out in tutus, feathers and sequins, they have entertained crowds

A ‘Haunted Lady’ is spotted outside a residence Saturday night in White Rock. Photo by Scott Valentine

Filming will take place October 2020 through April 2021. The show is produced by Warner Bros. Television and NM Talent Inc., and will film in Santa Fe, Las Vegas, Albuquerque and Madrid.

Daily Postcard: Roses spotted blooming last week in a flower garden on Grand Canyon Drive close out the 2020 growing season on a beautiful note. Photo by Carol A. Clark/ladailypost.com

Roses blooming last week in a garden on Grand Canyon Drive. Photo by Carol A. Clark/ladailypost.com

Roses blooming last week in a garden on Grand Canyon Drive. Photo by Carol A. Clark/ladailypost.com

In honor of Halloweekend 2020, Los Alamos will be screening a drive-in movie version of the Disney Halloween classic, “Hocus Pocus” 7 p.m. Friday, Oct. 30 in the Central Park Square North parking lot.
All ages are welcome for this free event, but registration is required in advance and opens at 2 p.m. Monday, Oct. 26.
Space will be limited.
Courtesy of Central Park Square, each registered vehicle will be entitled to a free one-topping pizza at Time Out Pizza, adjacent to the parking area, with a validated Eventbrite ticket.
Each vehicle also will receive complimentary
Tags:
Entertainment Community Business
Read More »

A Northern Flicker, ‘Red Shafted Flicker’ is spotted during a morning walk today perched high atop a tree, admiring the view and lifting spirits in White Rock and all over Los Alamos. Flickers are members of the woodpecker family. They are named for the brilliant red or yellow undersides of their wings and tails that cause the birds to resemble flickering flames when they fly. Flickers are primarily ground-feeding woodpeckers. They hunt for ants and other subterranean insects using their feet and strong bills to dig and remove insects from the ground. Like other woodpeckers, flickers eat fruit,

A painted rock resting in a dead tree is spotted during a hike Monday along a horse and hiking path behind the North Mesa Stables. Photo by Jenn Bartram/ladailypost.com 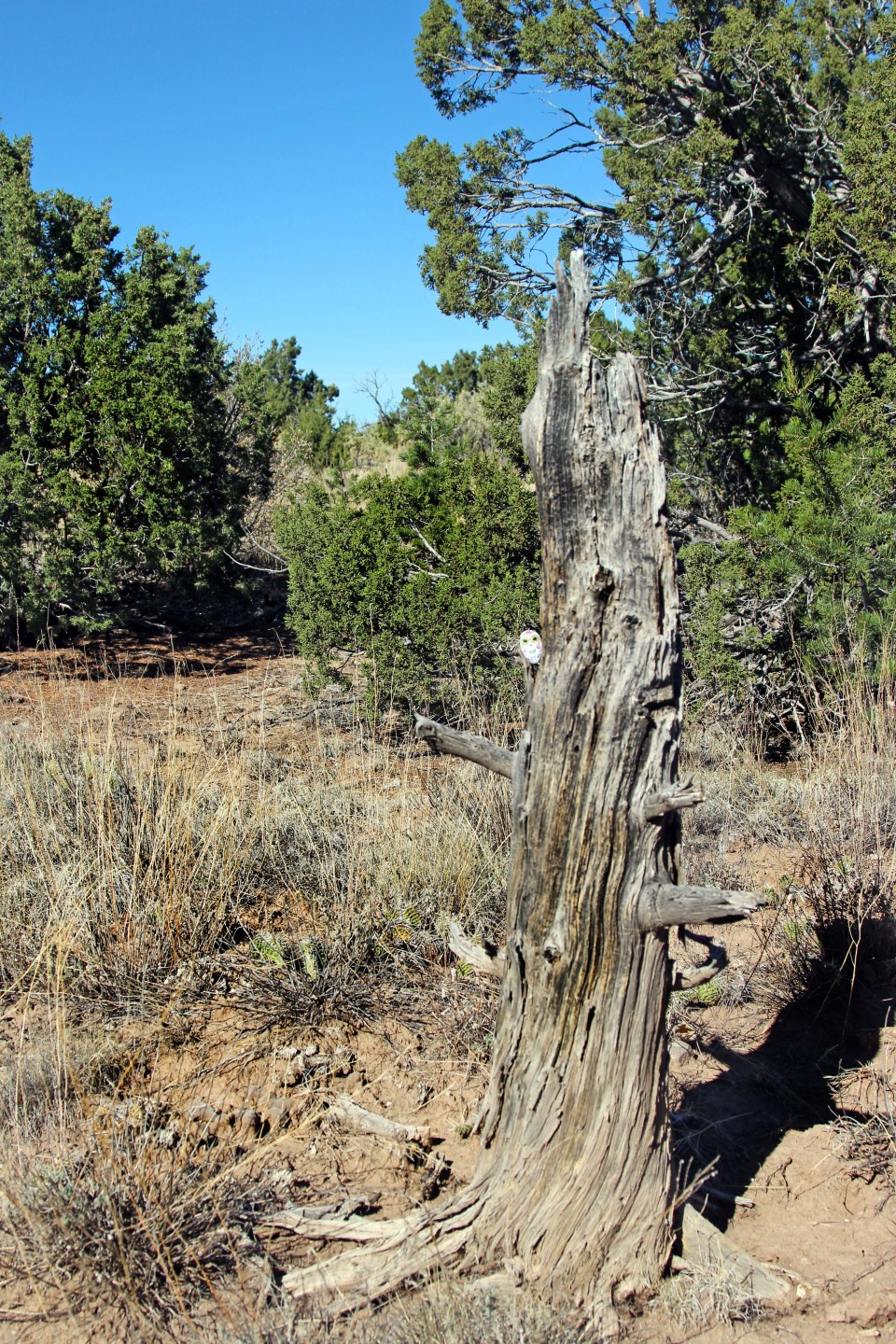 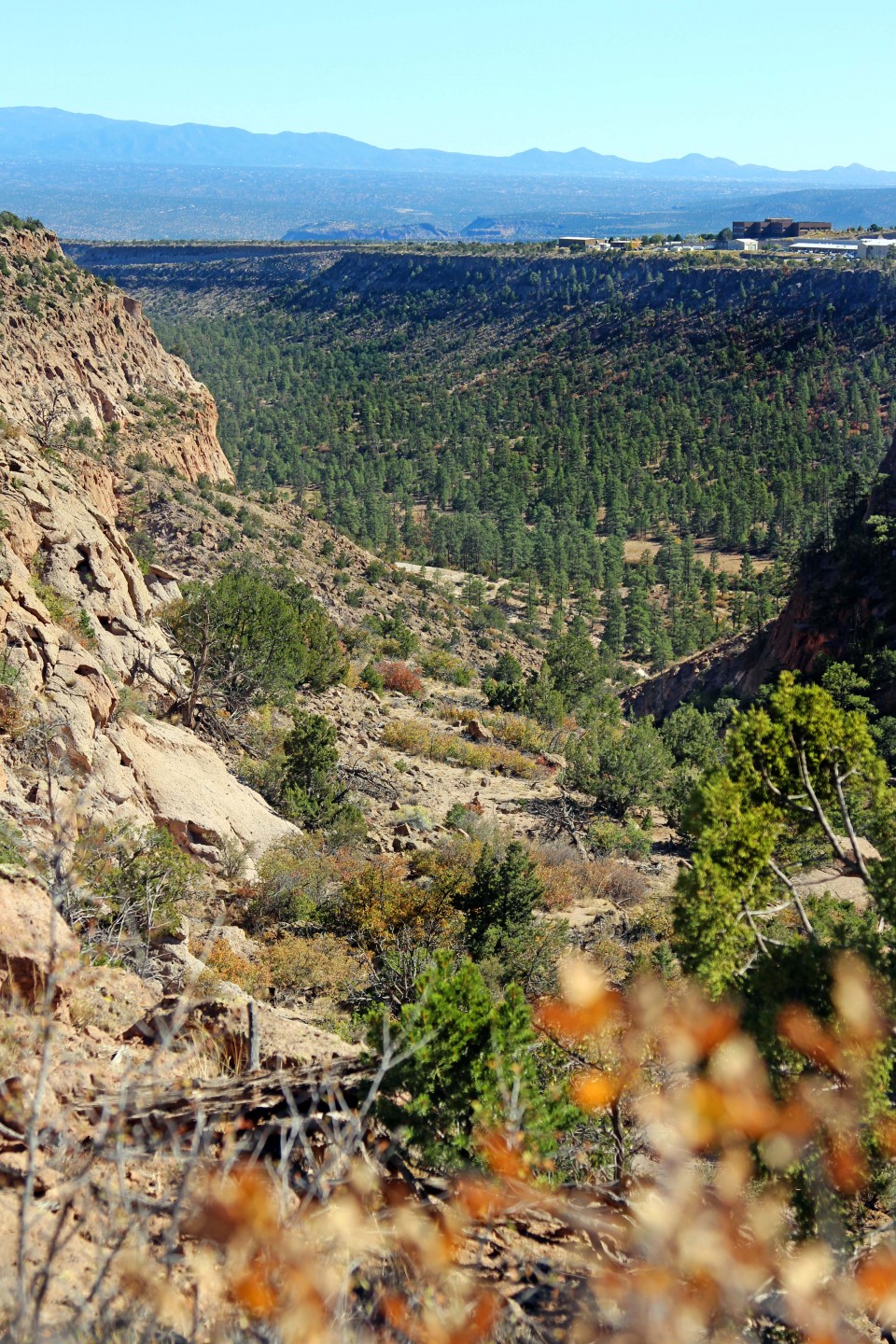 Submitted by Carol A. Clark on October 21, 2020
Daily Postcard: She’s got this! An Acorn Woodpecker is not daunted in the least as she settles down on a railing to tackle a pair of jumbo peanuts recently near Mountain Elementary School. Acorn Woodpeckers are unusual in that they live in large groups, hoard acorns and breed cooperatively. Group members gather acorns by the hundreds and wedge them into holes they’ve made in tree trunks or telephone poles. Acorn Woodpeckers also spend considerable time catching insects on the wing. Source: allaboutbirds.org. Photo by Greg Noeninckx

A jaguar about to swim the Three Brothers River. A free Zoom presentation by Martin Cooper will take place this Friday. If you have already requested an invitation, you are asked to request again due to a technical glitch, by emailing Director@losalamosseniorcenter.com. Photo by Martin Cooper

Many may know Martin Cooper as a LANL physicist, but this week you can see him through the eye of the camera lens, a virtual tour, from before the world changed the very meaning of travel.

Friday, seniors enduring the pandemic who find the need to “get out”

Daily Postcard: View of the sunrise during a walk Sunday in White Rock. Photo by Nancy Ann Hibbs