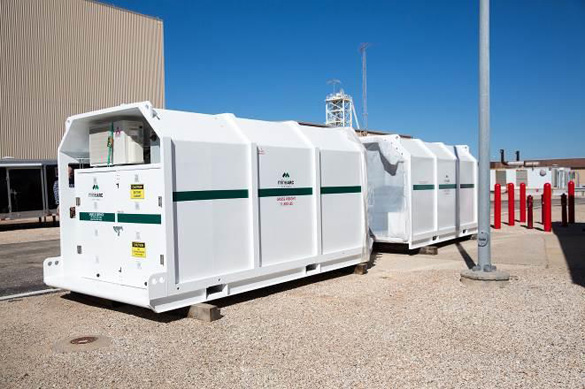 Safe havens provide life-saving shelter for underground workers in the event of an emergency. Courtesy photo
WIPP News:
The WIPP site has made significant safety improvements. Recently, eight underground safe havens (or refuge chambers) were delivered to the site and will be downloaded into the WIPP underground prior to the restart of waste disposal operations.
The safe havens are about 28 feet long, 8 feet wide and 7.25 feet high and weigh approximately 19,000 pounds.
Each unit is equipped to house 20 people for at least 36 hours in the event of an emergency where workers may not be able to safely evacuate the mine.
The safe havens contain life-saving and habitability elements, such as a heating, ventilation and cooling system; an on-board oxygen delivery system; food; water; a chemical toilet; gas monitoring capabilities; lighting; seating; and other features.
These units are being installed at WIPP as part of the overarching safety and emergency program enhancements associated with WIPP recovery efforts.
Interim Ventilation System Ductwork Installation Begins
Work continues to progress on the Interim Ventilation System (IVS), as crews began installing the ductwork that will tie the new system into the exhaust air ventilation circuit.
More than half of the ductwork supports have already been installed around the IVS, with the remaining supports in process. Electrical transformers supporting the IVS have also been placed as part of the overall IVS.
Once completed, the system will significantly increase the overall amount of airflow in the underground. This increase will allow more of WIPP’s diesel-fueled equipment to operate underground, thereby helping crews to complete restoration activities.
The City of Carlsbad and DOE will co-host a Town Hall meeting featuring updates on WIPP recovery activities. The meeting is scheduled for 5:30 p.m. Thursday, Jan. 7, at Carlsbad City Council Chambers, 101 N. Halagueno St. Live streaming of the meeting can be seen at http://new.livestream.com/rrv/.
Menu
Los Alamos
46°
Fair
6:58am4:51pm MST
Feels like: 46°F
Wind: 0mph WSW
Humidity: 22%
Pressure: 30.34"Hg
UV index: 0
ThuFriSat
59/37°F
57/36°F
55/32°F
Weather forecast Los Alamos, New Mexico ▸