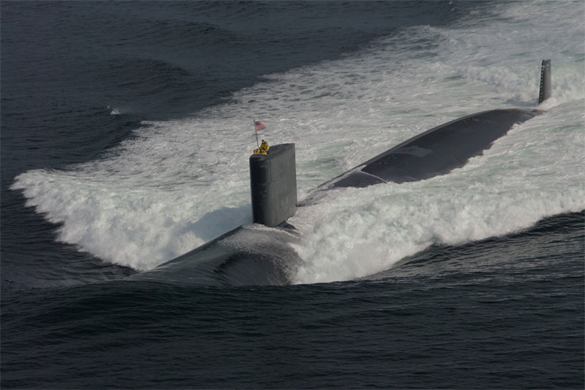 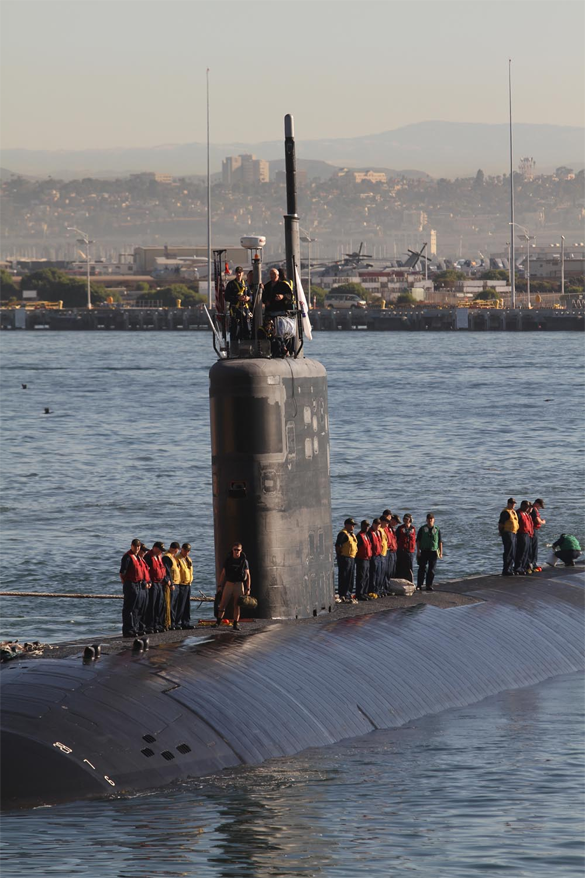 The USS Santa Fe. Photo by Rick Carver
USS SANTA FE News:
The USS Santa Fe Committee has announced that 10 members of the USS Santa Fe crew arrived to visit Santa Fe and Northern New Mexico Nov. 8 in celebration and recognition of Veterans Day.
Chair Ronald Olexsak of the USS Santa Fe Committee said this visit has been in the planning stage for a year and both the crew and the Committee are thrilled that its happened.
“Competition amongst the crew to be selected for this visit is intense,” Olexsak said.” “Not one of the current crew members is from New Mexico and this will be the first time for any of these ten men to see their namesake city and Northern New Mexico. They are in for a very pleasant surprise.”
During their four day stay, the crew is touring Los Alamos National Laboratory and participating in the Laboratory’s Veterans Day observance, performing service work at Kitchen Angles, meeting with students from the Santa Fe High School NJROTC program, attending the Indigent Veterans Funeral at Santa Fe National Cemetery, and marching in the City of Santa Fe’s Veteran’s Day. The crew is being treated to some of the area’s finest restaurants during their stay, including the Red Sage Restaurant at Buffalo Thunder, and Santa Fe favorites such as the La Montañita Co-op, Piccolinos, Raven’s Rock Café and El Castro’s.
About the USS Santa Fe
The USS Santa Fe SSN 763 is a Los Angeles-class nuclear powered submarine that was commissioned on January 24, 1994. She is the second U.S. Navy ship to be named for the capital of New Mexico. The first ship, the USS Santa Fe CL-60, was a light cruiser that saw extensive action in the Pacific Theater during World War II.
The USS Santa Fe has a crew of more than 100 officers and men and is stationed out of Pearl Harbor, Hawaii, running patrols throughout the Pacific Theater of Operations.
About the USS Santa Fe Committee
The USS Santa Fe Committee, part of the New Mexico Council of the Navy League of the United States, is a community-based organization that provides support to the crew and their families. Submarines are deployed for up to six months at a time.
Being separated from families during such lengthy deployments is difficult for both the crew and their families. The Committee’s support is a significant morale booster for both the crew and the family.
Menu
LOS ALAMOS