The Lensic Presents Rita Moreno: My Life With Words And Music Oct. 27 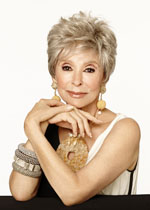 Rita Moreno. Credit/Mark Hill
LPAC News:
SANTA FE ― The Lensic presents stage, film and television treasure Rita Moreno in Rita Moreno: My Life with Words and Music at 7:30 p.m., Thursday, Oct. 27. Tickets start at $25 (TicketsSantaFe.org).
With her quick wit, deep insight and earthy candor, Moreno will share fascinating stories and songs from her childhood in Puerto Rico and her seven-decades-long career, including encounters with some of show businesses’ biggest names.
She is one of only 12 living performers who have the distinct honor of winning all of the industry’s most prestigious awards: The Oscar®, The Emmy®, The Tony®, and The Grammy®, but says she is most proud of being a trailblazer for Latinos in the entertainment industry. Moreno was the first Latina, and second person, ever, to ever win all four awards. “I am now called ‘la pionera,’ the pioneer, which I think is kind of charming,” Moreno said in a CBS Sunday Morning interview.
Moreno won the Oscar for perhaps her best known role, the skirt-twirling spitfire Anita in West Side Story; (making her the first Latina to win an Academy Award), The Tony for her comedic Broadway triumph, The Ritz; The Grammy for her performance on The Electric Company Album, based on the long-running children’s television series in which she starred, and two Emmys for appearances on The Muppet Show and The Rockford Files.
An octogenarian, Moreno was born Rosita Dolores Alverio in a small Puerto Rican town. She moved to New York with her mother at age five. She soon began dance lessons, which led to her Broadway debut at 13.
Then, in true Hollywood tradition, a talent scout spotted her and arranged for the beautiful precocious teen to meet MGM mogul Louis B. Mayer, who signed her to a film contract. He described Moreno as looking like “a Spanish Elizabeth Taylor.”
From her early years in theater to the height of film, Broadway, and television stardom, Moreno rose above the limitations of Hollywood typecasting and established herself as a versatile performer with virtually unlimited talent. She has starred on Broadway and London’s West End, and appeared in more than 40 movies (including the aforementioned West Side Story, The King and I and Singin’ in the Rain) and countless television shows. She has performed in numerous regional theatres, most recently in her one woman show, Life Without Makeup, at the Berkeley Rep.
Now on a 29-city tour, Moreno is as active today as ever. She is starring in a remake of producer Norman Lear’s classic TV sitcom, One Day at a Time, premiering in January on Netflix. She is known to television viewers for her guest-starring roles in primetime series, including Getting On, Jane The Virgin, Happily Divorced, Grey’s Anatomy and Grace and Frankie. She is the voice of “Abuelita” in the new NBC-TV Sprout network’s animated TV series, Nina’s World.
Her first book, Rita Moreno: A Memoir, instantly became a New York Times bestseller when published three years ago. She recently released her first ever all-Spanish language album, Una Vez Más, produced by her good friend Emilio Estefan.
Moreno’s fans transcend the ages. Michael Jackson once told her he knew every step of “America,” her exuberant rooftop number in West Side Story. Hamilton star Lin-Manuel Miranda, a fellow Puerto Rican, paid tribute to her at last year’s Kennedy Center Honors celebration in Washington, as did President Barak Obama and Associate Supreme Court Justice Sonia Maria Sotomayor, among others.
Moreno was honored by The Kennedy Center for a lifetime of artistic achievement. Her status as a national treasure was previously recognized when President George W. Bush presented her with the Presidential Medal of Freedom in 2004. In 2009 President Obama awarded her the American National Medal of the Arts for her lifetime of service and contributions to the arts.
Her dozens of other honors include receiving the Screen Actors Guild Life Achievement Award and the Latin Grammy Lifetime Achievement Award.
Moreno’s performance at The Lensic is generously supported by UBS-Hees/Macukas Wealth Management Consultants.
Menu
Los Alamos
30°
Clear
7:25am6:12pm MDT
Feels like: 30°F
Wind: 0mph NNW
Humidity: 84%
Pressure: 30.3"Hg
UV index: 0
ThuFriSat
48/34°F
54/37°F
57/36°F
Weather forecast Los Alamos, New Mexico ▸
Previous
Next