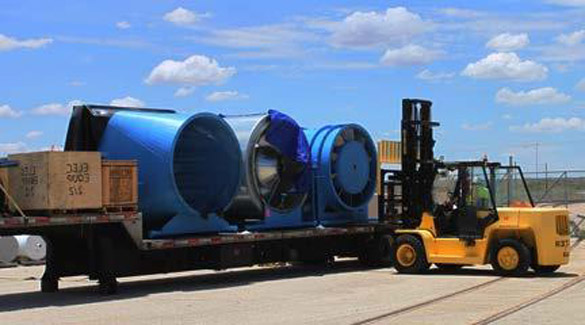 WIPP employees unload sections of the SVS early this week at the WIPP facility. Courtesy/WIPP
WIPP News:
Sections of the new Supplemental Ventilation System (SVS) arrived this week at the Waste Isolation Pilot Plant (WIPP) in Carlsbad.
The SVS is designed to increase the total amount of air supplied to the underground. The fan assembly underwent factory acceptance testing last week and arrived at the WIPP facility early this week. The fan and associated equipment will be transported to the WIPP underground in four pieces where it will be assembled by WIPP personnel.
Once operational, the 151 horsepower electric fan will be positioned near the primary air intake shaft where it will be used to draw approximately 130,000 cubic feet per minute (cfm) of surface air into the underground. Used in conjunction with the Interim Ventilation System (IVS), the SVS will increase the air supplied the underground to approximately 180,000 cfm.
Under the current configuration, one of the three 860 series fans is operated at a time, pulling air through the underground and exhausting it through High Efficiency Particulate Air (HEPA) filters. The new SVS is designed to work in combination with the IVS and the current ventilation system to augment these fans, increasing the overall airflow in the underground necessary to allow operation of additional pieces of equipment.
WIPP employees continue to work to restore the WIPP facility to full operations.
Menu
LOS ALAMOS