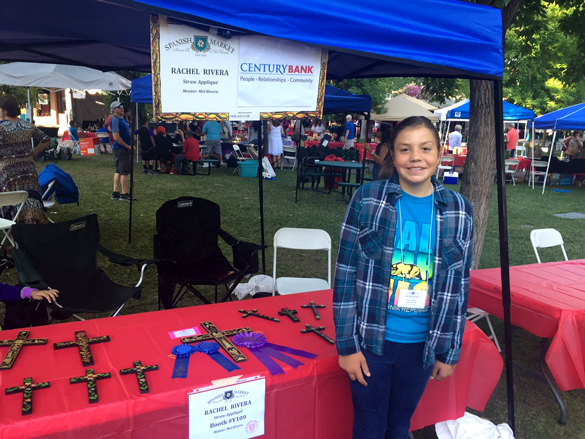 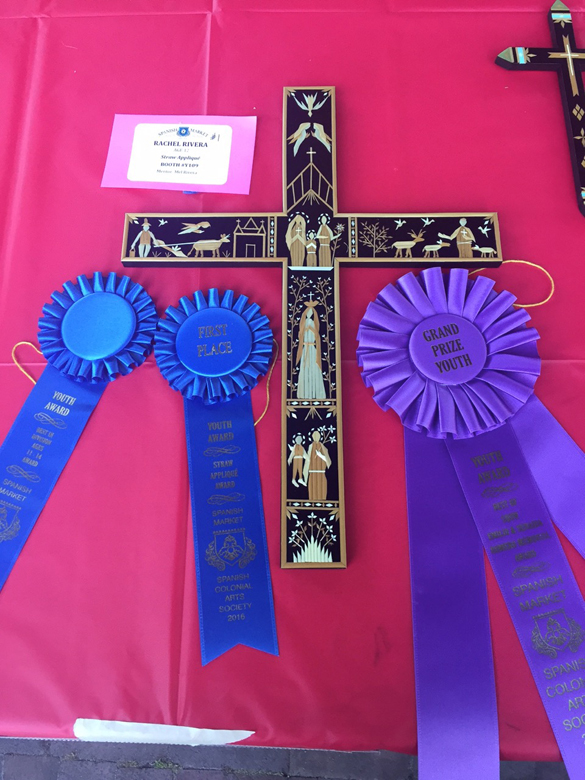 Rachel Rivera’s straw appliqué art piece, “Holy Family,” won youth grand prize, best of show award and the straw applique award at this year’s Spanish Market. Photo by Christine Hipp
By KIRSTEN LASKEY
Los Alamos Daily Post
Los Alamos Middle School eighth-grader Rachel Rivera followed her father’s footsteps when she began creating straw applique artwork. However, Rivera earned her own place in this particular art form as well as a spot in the limelight when she received the youth grand prize, best of show award and the straw applique award at this year’s Spanish Market.
The Spanish Market was July 25-31 in Santa Fe. Awards were given to younger generations of artists age 7-17 years old.
Rivera’s award-winning piece, titled, “Holy Family,” took a month to complete. Straw applique, she explained, involves decorating a painted piece of wood with cut straw. In Rivera’s work, she creates wooden crucifixes. “I love to do a lot of patterns. I also like to do the saints and I also like flowers,” she said.
Rivera’s father, Melvin, started teaching her the art form when she was in third grade. He has had lengthy experience as a straw applique artist, having done the art for 30 years. Rivera said she really enjoys art but doesn’t feel she is very strong at drawing. Straw applique allows her to be artistic but it isn’t necessary to draw perfect shapes that the straw will be cut into.
It was Rivera’s second time participating in the Spanish Market. “I like to meet a lot of different people,” she said. “I like to hear how they like my art and I like to know what they think of it.”
Winning the awards this year was a surprise. “It felt pretty great,” Rivera said. “I felt pretty shocked because I didn’t expect to win any awards.”
Of course her father and teacher was proud. “He was pretty proud of me,” she said, adding her father has won many awards himself.
Rivera’s work has appeared in other public venues, too. She said museums in Santa Fe have sold her art. She added she plans to continue showing her work at future Spanish Markets.
“I know I really want to continue now because I know I’m pretty good and I’ve won the awards,” Rivera said.
Rivera’s mother, Christine Hipp, said she also admires her daughter’s talent. “I’m just very proud,” Hipp said. “She is very talented and following in her father’s footsteps (and creating the straw applique art) -that takes a lot of patience. I don’t have that but Rachel does.”
Menu
Los Alamos
91°
Sunny
5:48am8:23pm MDT
Feels like: 91°F
Wind: 10mph SSE
Humidity: 8%
Pressure: 29.74"Hg
UV index: 3
TueWedThu
88/64°F
91/64°F
88/64°F
Weather forecast Los Alamos, New Mexico ▸