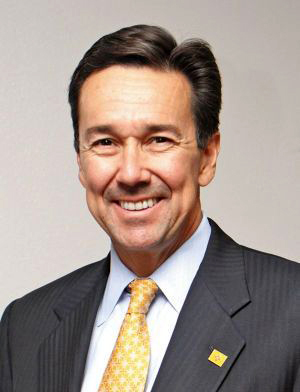 STATE News:
SANTA FE ― Gov. Susana Martinez announced that Economic Development Secretary Jon Barela has been named CEO of the Borderplex Alliance, a nonprofit organization that promotes business growth and expansion along the border.
Under Martinez’s leadership, New Mexico has led the nation twice in export growth in the past five years, with total exports increasing by more than $2 billion and exports to Mexico nearly quadrupling due to increased border activity. This new position will allow Barela to continue building on the Martinez’s legacy of making New Mexico a leader in international commerce and trade, the result of bold reforms and the booming borderplex south of Las Cruces.
“Jon has been critical in helping us diversify our economy, and now, in his new position, he will be able to continue building on our record of success along the border,” Martinez said. “Because of our work, we’re less reliant on the federal government, and we’ve become a leader in international commerce and trade. We’ve worked hard to spread the word around the world that New Mexico is open for business, and I look forward to working with Jon as we continue to grow our economy along the border.”
In recent months, Martinez and Secretary Barela have announced nearly 2,500 new jobs in communities across New Mexico in a broad and diverse spectrum of industries, including high-tech and traditional manufacturing, healthcare, information technology, insurance, and finance. Some are homegrown New Mexico companies; others are national leaders in their industries.
Recently, the Albuquerque metro area experienced its best year-over-year job growth since 2007, and home sales in the metro through the first half of 2016 have already outpaced all of last year. In addition, employment has seen gains in 45 of the last 48 months, with 10,000 new jobs created in the last year.
Together, Martinez and Secretary Barela have worked to build strategic cross-border relationships with Mexico, which have helped New Mexico become a leader in international trade. New Mexico and Chihuahua have committed to developing the Santa Teresa-San Jeronimo border crossing into a 70,000-acre, first-of-its-kind binational community along the southern border, making the region a key corridor for trade.
Barela advocated for Martinez’s bold reforms to make New Mexico more competitive with surrounding states. These reforms include cutting taxes 37 times, lowering the state’s business tax rate 22 percent, and eliminating tax pyramiding, which often resulted in the double and triple taxation of manufacturers. As a result of these tax reforms, renowned professional services firm Ernst and Young recognized New Mexico as the Best in the West for the taxation of manufacturers, and Kiplinger now ranks the state as the 8th most tax-friendly in the nation.
Secretary Barela also helped promote Martinez’s plan to grow and support valuable tools to help businesses grow, thrive, and hire more New Mexicans, such as Local Economic Development Act funds and the Job Training Incentive Program.
On the heels of the reforms, word is getting out to more business leaders around the country about New Mexico’s improved competitiveness and business friendliness. Earlier this summer, CEO Magazine added New Mexico to its Biggest Gains of 2016 list, jumping from 36th to 32nd on their annual Best States for Business ranking.
“As I return to the private sector, my work to diversify New Mexico’s economy and build on the Governor’s bold reforms is far from done,” Barela said. “I’m grateful for the Governor’s support and friendship over the past six years, and I am excited to continue building on the progress we’ve made in building up a key corridor for trade between the U.S., Mexico, and the rest of the world.”
Effective Oct. 1, Barbara Brazil, Deputy Cabinet Secretary, will serve as acting Cabinet Secretary.
Menu
Los Alamos
88°
Sunny
5:48am8:24pm MDT
Feels like: 88°F
Wind: 4mph S
Humidity: 14%
Pressure: 29.7"Hg
UV index: 4
FriSatSun
88/61°F
84/61°F
88/63°F
Weather forecast Los Alamos, New Mexico ▸