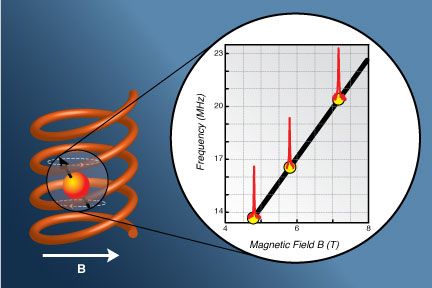 Plutonium is the most complex element in the periodic table, yet it is also one of the most poorly understood ones.

But now a well-known scientific technique, nuclear magnetic resonance (NMR) spectroscopy, may turn out to be the perfect tool for uncovering some of plutonium’s mysteries.

This signal promises to become a Rosetta stone for deciphering the complex atomic-scale electronic properties of this perplexing element.

Their paper on the subject, “Observation of 239Pu Nuclear Magnetic Resonance,” was published in the May 18 issue of Science magazine (link: http://www.sciencemag.org/content/336/6083/901. 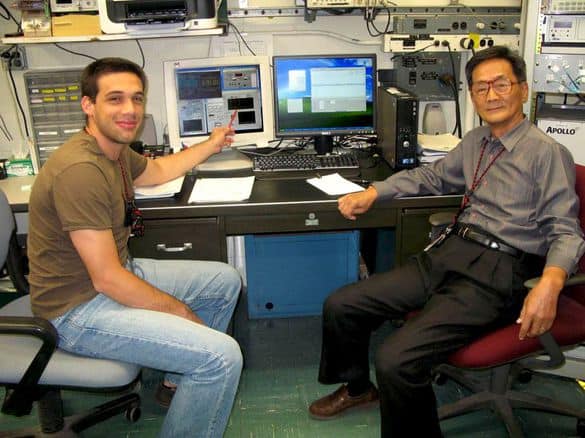 G. Koutroulakis and H.Yasuoka in the condensed-matter NMR lab at Los Alamos National Laboratory after having observed the magnetic resonance signal of Pu-239 for the first time. Courtesy Photo

For more than 50 years, chemists and physicists have been searching for the plutonium-239 magnetic resonance signal.

Only now, in an international collaboration between Los Alamos National Laboratory and the Japan Atomic Energy Agency, a team of chemists and physicists at Los Alamos has together determined just the right conditions for observing the signal.

The team led by visiting professor Hiroshi Yasuoka (JAEA) and Georgios Koutroulakis (LANL) observed the plutonium-239 resonance from a high purity solid sample of plutonium dioxide, PuO2, at a temperature of 4 Kelvin as a function of magnetic field.

Since its discovery in 1946, nuclear magnetic resonance (NMR) spectroscopy has evolved into one of the most widely used techniques for the characterization of materials at the atomic and molecular levels and has formed the basis for magnetic resonance imaging (MRI). NMR has revolutionized the practice of chemistry, physics, and medicine by providing a non-invasive method for the observation of matter at atomic scales.
“Just as knowing the NMR properties of other nuclei has advanced so significantly our ability to understand complex materials and phenomena as well as to image matter on a microscopic scale,” said Koutroulakis, “this discovery of the plutonium-239 magnetic resonance promises to revolutionize our understanding of plutonium solid state physics, chemistry, biology and materials science.”
From such studies the team has been able to determine the important physical constant (gyromagnetic ratio) that should allow future studies of plutonium by this technique, they say.
This constant is a fingerprint of Plutonium’s nucleus, but it allows scientists also to study Plutonium’s electrons. Significantly, these electrons play a decisive role in controlling the metallurgy and chemical reactivity of plutonium alloys and compounds.
They are crucial to determining the structural instability of elemental plutonium itself, the formation of molecular complexes as plutonium interacts with the environment and biological matter, and even the creation of unconventional superconductivity.
In view of the importance of plutonium compounds for
the ability to explore plutonium materials using NMR should prove particularly powerful, the scientists say.
Collaborators of Yasuoka and Koutroulakis in this discovery were Hiroyuki Chudo (JAEA) as well as Eric D. Bauer, David L. Clark, Gordon D. Jarvinen, Scott Richmond, Alice I. Smith, Joe D. Thompson and Douglas K. Veirs, all at LANL.
This work was supported by the U.S. Department of Energy, Materials Sciences and Engineering Division, Office of Basic Energy Sciences and the Division of Chemical Sciences, Geosciences, and Biosciences Division, the Los Alamos Laboratory Glenn T. Seaborg Institute, and the Los Alamos Laboratory Directed Research and Development program.
High-purity plutonium oxide was provided by the Surveillance and Monitoring Program at Los Alamos National Laboratory supported by DOE Nuclear Materials Disposition EM-33.
Menu
LOS ALAMOS