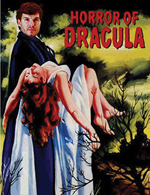 SFI News:
The popular Science On Screen series continues Sept. 23 in Santa Fe with Santa Fe Institute (SFI) Omidyar Fellow Sam Scarpino presenting Horror of Dracula.
“Dracula is as much about this problem, the problem of evidence and truth, as it is about vampires,” writes Eula Biss in her acclaimed essay On Immunity: An Inoculation.
Since the invention of vaccines, vampires have been used to scare individuals away from these life-saving shots.
While also a metaphor for concerns about capitalism and anti-immigration sentiments in Europe, Bram Stoker’s novel Dracula serves as a powerful reminder of how fear easily clouds human judgement.
Inspired by Bram Stoker’s novel and presenting Christopher Lee in a highly acclaimed role, Horror of Dracula is considered one of the greatest horror movies of all time. Although heavily censored in Britain on its release, the film went on to widespread critical acclaim.
Infectious disease biologist Sam Scarpino, an SFI Omidyar Fellow, will use this film as a backdrop to examine the history of fear surrounding vaccination.
The showing begins at 7 p.m., Wednesday Sept. 24, at the Center for Contemporary Arts (CCA), 1050 Old Pecos Trail, in Santa Fe.
Advance tickets are recommended. For tickets and prices, call the CCA Box Office at 505.982.1338.
Click here to view the online event listing.
The Science On Screen series is a collaboration between SFI and the Center for Contemporary Arts (CCA) in Santa Fe. During each showing, an SFI scientist presents a favorite film, offering personal perspectives and insights from the world of science. It’s an idea-rich spin on the movies.
Menu
LOS ALAMOS