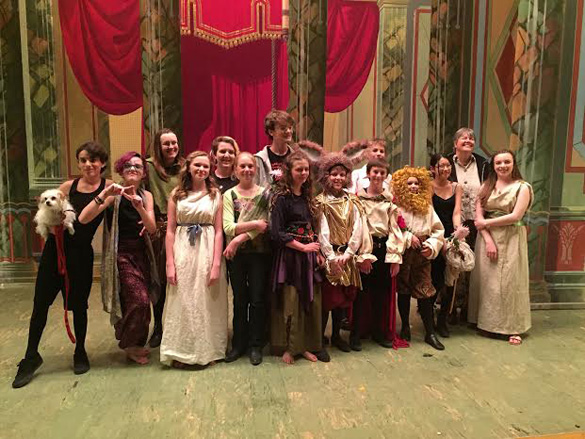 Upstart Crows of Santa Fe. Courtesy/Lisette Bell
UCSF News:
Upstart Crows of Santa Fe announces its upcoming production of William Shakespeare’s romance, The Winter’s Tale – a fitting kick-off to the arrival of the Folger Library’s First Folio of Shakespeare’s works at the New Mexico Museum of Art in February.
The tale, which combines tragedy and antic comedy, will be performed by 25 young Santa Feans age 11-17 making up two full casts.
The troupe, which began in September 2014 with three eager young Shakespeareans has grown exponentially over the past year, adding members with each production they’ve done.
Twelve year old Anna Gunter expressed the actors’ enthusiasm this way, “I feel like this is my passion. What I love about Shakespeare’s writing is that it inspires me.”
The Crows are a non-profit 501(c)(3) arts and education organization dedicated to bringing Shakespeare to Santa Fe youth by providing 10-18 year olds with a first-hand experience of the plays in all their depth and nuance.
With the help of experienced directors and International Shakespeare Center scholar Robin P. Williams, actors explore Shakespeare’s imagery and rhetoric, creating, through their understanding of the text beautiful and moving performances.
With most roles double-cast the actors collaborate in every aspect of production from direction to stage managing each other’s performances.
Crows Artistic Director, Anna Farkas, stages the play to emphasize its fairy-tale elements while not shying away from the complexity of its themes. The Winter’s Tale begins with a successful royal marriage suddenly gone wrong, the inexplicable madness of King Leontes and its seemingly irreparable effects.
Then, with that famous stage direction: “Exit, pursued by a bear,” the story shifts abruptly to fooling and a pastoral love story. The change brings relief even as it introduces deeper elements of mythology, social commentary and satire.
In the end, all is resolved when the characters come together to witness the reuniting of the king with his lost daughter, his reconciliation with the king he wronged, his queen’s return from seeming death, and the marriage of the young lovers.
Performances are 7 p.m., Thursday through Saturday, and 2 p.m., Sunday matinee, Jan. 21-24, at the Scottish Rite Temple. Tickets are $5 available from cast members or reservations can be made on our website.
You can also reserve by phone: (505).466.3533
The Crows is committed to keeping this program accessible to any child who wishes to participate. Not only are there no auditions or prior experience required, but tuition is kept affordably low and scholarships are available to any family who needs help taking part.
Menu
Los Alamos
36°
Fair
7:02am4:51pm MST
Feels like: 30°F
Wind: 6mph S
Humidity: 40%
Pressure: 30.03"Hg
UV index: 0
TueWedThu
46/30°F
46/34°F
46/34°F
Weather forecast Los Alamos, New Mexico ▸