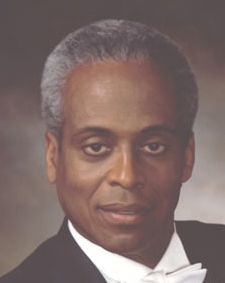 Sam Hagan, vocalist from Atlanta will be accompanied by Juantia Madland.

They performed together last year and were quite a hit.  Sam is in town to attend the opera and offered to do a concert at the senior center.

Sam Hagan, one of the Southeast’s finest tenors, didn’t actually plan to be a professional singer. Until recently, he was a full-time biology and chemistry teacher at Atlanta Metropolitan College, and he is an avid gardener and home-renovator.

But all that frequently took a back seat to a very busy and demanding career as a soloist, not only in his hometown of Atlanta but around the Southeast and the world.

Hagan has performed as a featured soloist with some of America’s best orchestras including the Atlanta Symphony, Cleveland, Cincinnati, and the Flagstaff Festival Orchestras, and at the world-famous Spoleto (Charleston) Festival under such noted conductors as James Levine, Lorin Maazel, Skitch Henderson, Louis Lane, and, on many occasions, with Robert Shaw.

He has studied with Metropolitan Opera baritone Timothy Nolen and Patricia Heuermann, former director of Hofstra University’s opera program in New York He has been featured in concert in England, Europe (where he served as cantor for a mass at St. Peter’s Basilica), Canada, and Mexico. He twice sang for Pope John Paul II, and he sang at the inauguration of President Jimmy Carter.

Some of his roles in opera include Ferrando in Mozart’s Cosi fan Tutte, Pinkerton in Puccini’s Madama Butterfly, Alfredo in Strauss’s Die Fledermaus, Rudolfo in Puccini’s La Boheme, Sportin’ Life in Gershwin’s Porgy and Bess in the Atlanta Symphony Orchestra production with Robert Shaw and as Robbins in the Grammy-award winning Cleveland Symphony Orchestra production with Lorin Maazel, and the title role of Offenbach’s Tales of Hoffmann.

He has performed numerous works of J. S. Bach and others including the Christmas Oratorio, the Passions of St. Matthew and St. John, several masses and requiems by Mozart and numerous works by Handel, including The Messiah and Israel in Egypt.

Hagan has received numerous glowing reviews of his performances.

Praise Rings Out As Shaw Conducts.  Hagan acquitted himself nobly in the high and difficult solo part of the “Sanctus,” sung against the exquisite background of women’s voices. Hagan sang from somewhere in the rear of the top balcony, which lent a special celestial quality to the floating tones of his smooth pellucid singing. John Schneider, The Atlanta Journal

Sam Hagan was clearly the audience favorite. His poignant presentation of the Carmen: Flower Song was beautiful, dramatic and secure. This was complemented with the later rendition of It Ain’t Necessarily So, full of formidable technique and sheer showmanship. Kitty Lamb, The Augusta Chronicle

Mr. Hagan followed Miss Holliday and did a breath-taking performance of “M’Appari Tutt’ Amor” from the opera “Martha.” The audience may have been breathless, but Mr. Hagan surely was not as he phrased so beautifully revealing his mastery of breath control and articulation. Wylie Graydon III, The Albany Herald