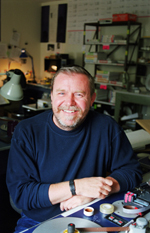 SANTA FE — The 1990 release of The Civil War, a nine-part documentary, not only brought new attention to the nation’s greatest crisis, but also revolutionized the art form.

Film editor and post-production supervisor Paul Barnes worked hand-in-hand with Ken Burns on the series, which earned numerous awards. The two have since made other landmark documentaries.

Friday, May 8, at 6 p.m., Barnes will show re-cut clips from The Civil War to detail their experience and describe how they remastered the series in high definition for a 25th-anniversary airing on PBS stations this September. Barnes will speak at the historic Lensic Performing Arts Center, which is graciously partnering with the museum on this event. Admission is free, with a suggested donation of $10.

The presentation is part of the programming series for the History Museum exhibit, Fading Memories: Echoes of the Civil War, opening May 1, in collaboration with the Santa Fe Opera’s debut of Cold Mountain this August.

In an essay for the PBS website (http://www.pbs.org/civilwar/), Barnes explained why he and Burns remastered the series and said of its outcome: “Visually, The Civil War is now steadier, sharper in focus, cleaner and with a greatly enhanced visual beauty. The color is now the way it was intended to be when the film was originally shot. The still photographs all have been assigned a variety of sepia tone that correspond to the intended emotional effect of the sequences … We believe the digital remastering process has created a film that will feel like a brand new, richly textured, and more enveloping viewing experience—one that we hope will only deepen the viewers’ emotional response to this crucial turning point in our nation’s history.”

Barnes, who lives part time in Santa Fe, attended the New York University Institute of Film and Television from 1969–1973 and studied under experimental filmmaker Len Lye and documentarian George Stoney. While still a student, he was chosen to edit a federally funded film on pre-school education, and has been editing ever since. Since 1984, when he edited the Academy Award-nominated Statue of Liberty, Barnes has collaborated with Ken Burns of Florentine Films. Their partnership has produced some of the most seminal work in the history of documentary filmmaking.

The Civil War premiered in September 1990 and became the highest-rated series in the history of American Public Television. It won more than 40 major film and television awards, including two Emmy Awards, two Grammy Awards, the Peabody Award and the Lincoln Prize. Since then, Barnes has edited or supervised the editing on most of Burns’ films, including: Baseball; Empire of the Air: the Men Who Made Radio; Thomas Jefferson; and Lewis and Clark: The Journey of the Corps of Discovery.

In 1997 Barnes produced his first film with Burns, a story of suffragists, Not for Ourselves Alone: The Story of Elizabeth Cady Stanton and Susan B. Anthony. It won a Peabody Award and Emmy for Julie Harris’ voice performance as Susan B. Anthony. Barnes was supervising editor on a 10-part Burns’ production about the history of jazz music. Jazz aired in January 2001, and received five Emmy nominations, including Best Editing. Barnes co-produced and co-edited Unforgivable Blackness: The Rise and Fall of Jack Johnson, a two-part film about the first African-American heavyweight boxing champion.

The film aired in 2005 and won three Primetime Emmy Awards, including Outstanding Nonfiction Special. Barnes went on to act as supervising film editor on The War, a seven-part film that aired on PBS in the fall of 2007. Besides winning multiple awards, The War was the most-watched series in the last 10 years on PBS.

Barnes then became supervising film editor on Burns and Dayton Duncan’s six-part series, The National Parks: America’s Best Idea, which won the Primetime Emmy Award for Best Non-Fiction Series of 2009. Most recently, Barnes was lead producer and one of three editors for The Roosevelts: An Intimate History, a film on the lives of Theodore, Franklin and Eleanor Roosevelt. This seven-part, 14-hour series aired on PBS in September 2014.

Barnes has also held teaching positions in the film departments at New York University and Keene State College. He was born in Everett, Massachusetts, in February 1951, and resides in Alstead, New Hampshire, and Santa Fe.