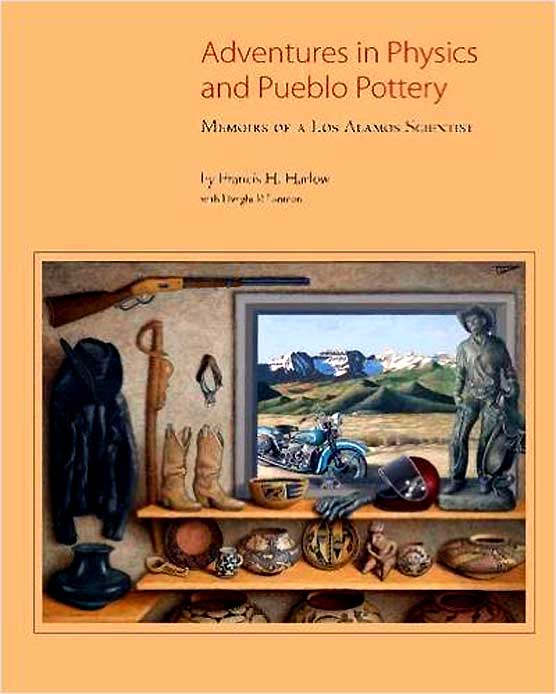 Francis H. “Frank” Harlow was a unique human being with a boundless curiosity and a lifetime of devotion to some very serious interests. A one-of-a-kind physicist, he also was a passionate naturalist and artist. Along with his scientific breakthroughs in the field of fluid dynamics, he may be best known for his role as a collector, connoisseur and authority on Pueblo pottery.

His breadth of interests is only partly captured in the title of his autobiography, “Adventures in Physics and Pueblo Pottery: Memoirs of a Los Alamos Scientist. The book was published by the Museum of New Mexico Press shortly before his death, at the age of 88, July 1, 2016.

Assembled from various summaries and notes that he started to compile after his retirement from Los Alamos National Laboratory in September 2003, the volume began as a limited edition, “Harlow Memoirs,” for family, friends and a few of the institutions with which he was associated. It was then expanded and revised to its current form in collaboration with Dwight Lanmon, who also collaborated with Harlow on four books about Pueblo pottery.

“I was a complete loner,” he wrote of his undergraduate life, mostly at the University of Washington, “no social life, no dates (until graduate school days), and no bumming around with the guys.”Nearly six-and a-half-feet tall, he was lean and gangly and still shy and naïve. After poor grades and a disappointing start as physics major, he buckled down, improved his marks and entered graduate school at UW, where he became more sociable and developed friendships as a teaching assistant.

At the end of his third year of graduate school, he met the woman who would share his life, Patricia Jean Nystuen who was working as a secretary in the physics department office. A year later they were married and in September 1953Frank Harlow took a post in the theoretical physics division at LANL, where he would work for 50 years.

Family life came first for Harlow, as one can tell by its prominence in his autobiography. His affection for the rhythms and warmth of domesticity is a subject that precedes his work at the lab or any of his demanding avocations. In “Los Alamo style,” Harlow tells the story of his family through their climb up the housing ladder, from a quadraplex apartment on Gold Street to a duplex on 34th Street, when their first daughter, Katie was born in March 1955. Daughter Carol added another “point” to their housing qualification, the next year, and they moved to a single-family house on Piñon Loop. In 1959,  third daughter  Celia was born, entitling the family to a four-bedroom home on Sage Loop, and finally, with the addition of son Keith in 1960, the family had maxed out the available number of bedrooms, except for a precious few four-bedroom houses with additions, including one on Eleventh Street that had been modified to six bedrooms. With luck and patience, the family was able to snag it, and Frank and Patty Harlow would stay on there even after all the children had left home.

As Frank Harlow explains, outlining the next phase in their lives, which began with converting the empty nests into a workroom for Patty and a painting room and a pottery room for Frank. He writes, “My main activities included going to the office, working on studies of Pueblo Indian pottery and painting pictures.” As the Harlows began accumulating their famous collection of Pueblo pottery, word of the special museum in their home got out to the Los Alamos schools and teachers and other members of the community began arranging class tours.

Harlow took a less-traveled path in his career at the laboratory. While he was encouraged to pursue some of the newest directions in physics like quantum mechanics, he realized fairly early in his career that he could be more effective if he stuck more closely to classical physics.  The field of fluid dynamics and turbulence seemed especially attractive, he decided. He was challenged by an old problem that one of the best-known Manhattan Project physicists, Richard Feynman, had said some years before, “that describing turbulence was the hardest unsolved problem in classic physics.”

Later, at a conference in Los Alamos, Harlow gave a presentation explaining his fascination with this subject. The visual piece of his talk included the 1980 eruption of Mount St. Helens and the spontaneous destabilizing contortions of the Tacoma Narrows Bridge in 1974, as well as some infamous tornadoes. “Can such a thing be calculated?” he wondered at the time. “That sort of problem became the focus of my life’s endeavors,” he wrote later in his memoir.

In 2004, Harlow was awarded a Los Alamos Medal, honoring a contribution at the highest level of scientific achievement, evidence that he had met his challenge and earned the sobriquet, “The Father of Computational Fluid Dynamics.”

In his professional position, Harlow met some of the most important scientists in the world, including Nobel Laureates, like Hans Bethe, who hypothesized the source of the energy in stars and Fred Reines, who discovered the intriguing particle known as the neutrino.

Harlow writes that Reines turned out to be a poet, and once while they were talking about poetry Reines offered to write a short poem for Harlow. In a few words, Reines managed to nail the subject of Harlow’s turbulence:

There is delight in the illusion

That given wild enough confusion

There follows such precise conclusion

Harlow recalls sitting up late conversing with Murray Gell-Mann, who won his Nobel Prize for his work on quarks and other elementary particles. Like Harlow, Gell-Mann was knowledgeable about many things, including ancient coins and tropical birds, not to mention their mutual interest in Pueblo pottery.

In walks and excursions around Los Alamos, Harlow developed an interest in paleontology, a fascination that inspired world-class collections of fossils, some of them dating to the Pennsylvania Period, 300 million years ago. That was one of three periods when what is now Northern New Mexico was covered by ocean waters, and it was also a time when small clam-like creatures known as brachiopods flourished. “From 1953 to about 1959,” Harlow writes, “I focused my free time on fossils, especially brachiopods.” Before he decided that there was nothing left to discover on that subject, Harlow boasted  that he had found, purchased or traded for several thousand specimens of brachiopods and had met a lot of very interesting people.

A deeply humanist aspect of himself was revealed in his investigations of Pueblo pottery, which enabled him to earn the trust of the potters themselves, included the famous San Ildefonso Pueblo potter Maria Martinez. From Martinez, among many others, he learned how to identify and value the essential qualities of many types and periods of these complex and beautiful Native American artifacts.

His curiosity and rapt attention to detail also contributed to Harlow’s achievements as a painter. In his selection of paintings for the book, we see not only the breathtaking range of his imagination and skill, but also the rich reward of a purposeful life.

He was a modern avatar of a renaissance man, loved and admired by those who knew him. When they speak of Frank Harlow, one can hear that tone of voice that betokens wonder.