The eye of a dragonfly. Photo by Rudi Gunawan

PEEC Amateur Naturalist
Honeycomb, Dragonfly Eyes, and Lava Columns
By ROBERT DRYJA
The comb of honeybees has fascinated people for centuries. Marcus Terentius Varro, a Roman scholar, proposed in 36 BC that hexagons with equal sides would take the least total perimeter when dividing a surface into regions of equal area.
Stated differently, bees do not have to produce as much beeswax for storage containers when compared to square or triangular containers if the containers are hexagonal in shape.
Bees need to consume eight to fifteen pounds of honey in order to produce one pound of the beeswax used for honeycomb.
A hexagonal honeycomb maximizes honey storage while minimizing the amount of wax needed to make the storage container. 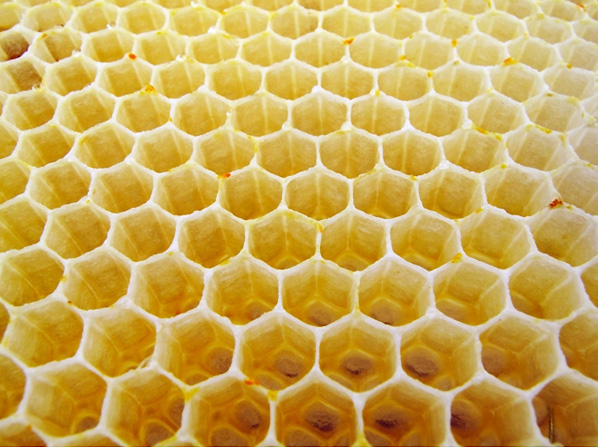 Photo by Cordelia Molley
Interestingly, the compound eyes of bees also are based on hexagons. A minimum of cellular material is needed to enclose the cells of each light receptor.
Bees also have hairs as a part of their eye structure. Research suggests that these hairs are sensitive to air movement and so help guide a bee.
This can be important since bees repeatedly return to a particular plant or area to gather nectar.

A bee’s eye with hairs. Photo by Rose-Lynn Fisher
Dragonflies have two compound eyes based on hexagons. Unlike honeybees, the eyes of dragonflies do not have hairs.
Dragonflies eat small insects like mosquitoes. Dragonflies patrol around ponds and do not go to specific locations to feed.
Each compound eye is composed of up to 30,000 hexagonal facets that nearly encircle the head, permitting a dragonfly to see above and below as well as behind itself while it hunts for food.
It is easy to assume that bees construct the six straight sides of a honeycomb, working to make them of equal width and at equal angles. However the hexagon is the finished product. What are the steps leading up to it?
Three vary patient observers saw that bees initially construct a circular honeycomb that is the diameter of the bees’ bodies. How are the straight hexagonal sides then made?
Bee’s have the ability to generate heat. The effect of this heat is most apparent in the winter when bees cluster into a ball around the queen bee.
Bee clusters have been measured with a temperature of 92 degrees at their centers.
Although the air temperature may be below freezing outside of a hive, the ball of bees remains warm inside.
Bees use this heat generating ability to make honeycomb from beeswax. Like many kinds of solids, beeswax expands and contracts with changes in temperature.
Rather than remain circular in shape, the beeswax in a honeycomb changes to a hexagonal shape when heated by the bee’s body heat and then cooled.
The warm wax of three circular combs folds to fill the open space between them, resulting in hexagonal walls.
The minimum amount of beeswax needed for a hexagonal shape also means that a minimum of heat is needed to achieve this shape.

Newly made circular honeycomb transitions to a hexagon with heat from a bee. Images by B.L. Karihaloo, K. Zhang and J. Wang

Hot, liquid lava contracts as it cools. A wide, deep cooling pool of lava initially solidifies at its upper surface. The lava surface contracts and creates cracks.
The cooling proceeds slowly downward and the cracks move downward as well. Columnar polygon shaped columns may be created, although not as symmetric as honeycomb.
The Giant’s Causeway in Northern Ireland is an example of this process. Columns also can be seen along White Rock Canyon and in White Rock itself. 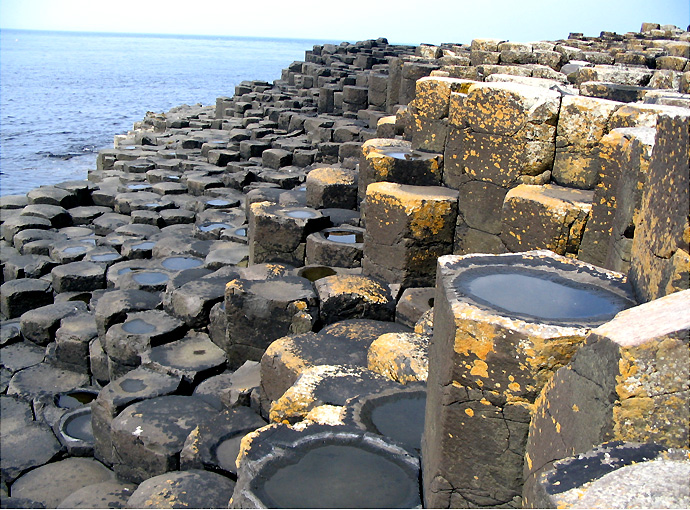 Columns at the entrance to White Rock Canyon. Photo by Robert Dryja

The hexagons of honeycomb, insect eyes and lava columns all have an underlying mathematics and physics at work. Interested in making your own columns? Columns can be made from a mixture of corn starch and water in a coffee cup. A light above the cup of the corn starch mixture provides heat so that the water evaporates from the top of the cup downward. A group of columns can be seen when the dry block of corn starch is broken apart. Link to this article for more information.