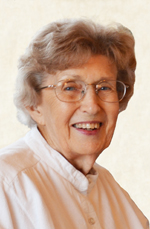 PHYLLIS ESTELLE KRICK Aug. 14, 1926 – May 20, 2017
Phyllis Krick, a longtime resident of Los Alamos, passed away at age 90 on May 20 from complications following a head injury sustained in a fall. She was surrounded by family during her final, peaceful hours.
Phyllis was born in 1926 in Boston, MA, to Benjamin and Dorothy (Fisk) Schoder and was raised in Boston and surrounding areas. She attended Boston Latin School and Boston Girls’ High School. Immediately after graduating with honors from high school in 1944 she joined the MIT Radiation Laboratory, which was recruiting young women with the strong math and science skills needed for radar development. Her main project was to assist with the V-Beam system under development at Ipswich, MA.
In 1945 Phyllis married Air Force pilot Paul Harrington and they had three children. Because of the relocation orders of military life, the family moved often, and she said that helped to stimulate her interest in travel. She liked to tell that she had lived at 47 addresses in her life, but just one for the last 34 years. 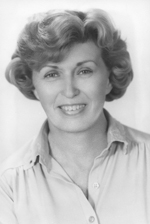 Phyllis in 1983. Courtesy photo
In 1968 Phyllis divorced and then married physicist Merlyn Krick. They met when they were both working at the Van de Graaff accelerator facility at the University of Rochester, where she was an accelerator operator. The couple soon moved to Los Alamos, where they remained except for five years in Manhattan, KS (Kansas State University) and two years in Vienna, Austria (International Atomic Energy Agency). She loved the time in Vienna and the couple traveled extensively while there.
Phyllis was a devoted mother, avid reader, volunteer worker, student of genealogy, jewelry maker, writer, gardener, cat lover, teacher, and photographer, among other things. In her younger days she was also a camper, hiker, and canoeist. She derived great satisfaction from her photographic work, from camera to darkroom to exhibits; she instinctively captured images that draw strong emotional responses. Phyllis researched her family tree, which goes back through the Mayflower to 13th century England, and wrote a book on her modern family history. She enjoyed and found especially rewarding her time teaching English as a Second Language, an activity that was ideally suited to her personality.
Phyllis was caring, highly principled, adventurous, courageous, and persevering. And she was delightful. With a beautiful smile, warm personality, soft voice, and lightning-fast wit, she made and kept friends worldwide. Her deep interest in and concern for the lives of others cemented the bonds of friendship. Her loss will weigh heavily on the hearts of those who knew her well.
She is survived by her loving husband; three children, Daniel Harrington (Sylvia), Elda O’Brien (Michael), Kenneth Harrington (Karen); five grandchildren, Elizabeth Derderian (Robert), Laura Harrington, Michael O’Brien, Katherine Harrington, Brian Harrington; and half-brother William Cassely.
At Phyllis’ request there will be no public memorial service. She asked that friends consider memorial donations to the Santa Fe Animal Shelter, the source of most of the family pets. Final arrangements are in the care of the DeVargas Funeral Home and Crematory.
Menu
Los Alamos
61°
Fair
7:20am6:18pm MDT
Feels like: 61°F
Wind: 7mph E
Humidity: 26%
Pressure: 30.08"Hg
UV index: 4
MonTueWed
70/46°F
52/34°F
54/36°F
Weather forecast Los Alamos, New Mexico ▸