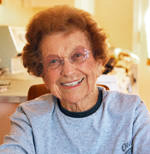 LORENZA GERTRUDE MONTOYA Sept. 5, 1918 – May 14, 2017
Lorenza Gertrude Montoya, 98, passed away in her home on May 14.
She had lived in Los Alamos for 65 years after moving from her hometown of Espanola. Lorenza was born to Jesus and Amada (Vigil) Rodriguez on September 5, 1918. She married Johnnie L. Montoya, of Monticello, NM, in 1947.
Lorenza was the loving mother of Bonnie Edwards, Loretta Ann Sanchez, and Randy Montoya, as well as Susan Montoya, who preceded her in death in 1959. She raised her three remaining children by herself after the death of her husband, Johnnie, in 1962.
Lorenza, who grew up in the Espanola Valley, did not speak English when she first started school but rapidly gained a love of English literature and poetry, which she often recited from memory throughout her entire life. She was proud to live in Los Alamos since she was an heir of the Ramon Vigil Land Grant.
She was proud of being a homemaker and raising a family. She was devoted to her family and delighted in all of their many accomplishments. Her joys varied from reading poetry to playing cards, and playing baseball with her brothers in her youth.
Her faith was one of her strengths and she was a member of the Immaculate Heart of Mary Catholic Parish since moving to Los Alamos. She was a devoted church goer, even walking with her family in snow storms to Mass. She was a strong, independent woman, full of dignity and with compassion for all those around her.
Lorenza was known throughout the community by her friendly smile and twinkling hazel eyes. She was always anxious to talk and cared for those around her, making her known to many at the stores she frequented. Her loving nature made her a part of many different families in her neighborhood.
During her early life, she worked for the WPA, and as an accountant for various businesses in the Espanola Valley, as well as at the medical center in post-World War II Los Alamos, where she met her husband, Johnnie, a World War II combat veteran.
Lorenza was preceded in death by her husband Johnnie, her daughter Susan, and her brothers and sisters, including Phil, Ruth, Jose, and Emilio. She is survived by her daughters, Bonnie Cecilia (Montoya) Edwards and husband C.L. of Los Alamos, Loretta Ann (Montoya) Sanchez and husband Anthony of Santa Fe, her son Randy John Montoya and wife Catherine (Jones) of Albuquerque, her grandchildren Christine Edwards, Heather Edwards, Holly (Edwards) Delanoy, Michael Sanchez, Laura Montoya-Ashton, Amanda Montoya, and great grand-children Skyla Striebel, Claire Delanoy, Jeremiah Delanoy, Amber Delanoy.
A celebration of her life will be held at the Immaculate Heart of Mary Catholic Church in Los Alamos on Monday, May 22, with Eulogy and Rosary at 10 a.m., funeral Mass at 11 a.m., followed immediately by interment at Guaje Pines Cemetery. A reception will be held at the church parish hall following interment.
Menu
Los Alamos
50°
Fair
7:13am6:28pm MDT
Feels like: 50°F
Wind: 3mph NNE
Humidity: 24%
Pressure: 30.37"Hg
UV index: 0
SatSunMon
61/39°F
64/45°F
64/39°F
Weather forecast Los Alamos, New Mexico ▸