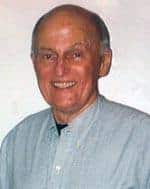 He was born in Fall River, MA in 1934. In 1946, he moved with his family to Southern California, eventually landing in the San Diego area, where he graduated from Point Loma High School.

In 1962, John moved the family to Southern California, and took a job with McDonnell-Douglas. Following Doris’ untimely death in 1964, he married Susan More in 1966, and adopted her two children, Barbara and Mike.

The family moved to Los Alamos in 1972, where John worked in the nuclear weapons program at the Los Alamos National Laboratory until his retirement in 1993. Los Alamos quickly became the home he would never leave. He spent many summer hours outside gardening, growing grapes, and puttering in the yard.

Beginning in 1974, he was a founding member and president of the New Mexico Vine and Wine Society and served on boards including the North Central NM Economic Development District.

He and Susan divorced in 1984, and he married the love of his life, Alahna Weller, in 1991. They enjoyed traveling the globe, learning and exploring new and old cultures. They shared a joy in skiing, hiking, traveling, dancing, and opera, among other hobbies.

John loved to teach, starting with teaching his kids to body-surf and ski, leading to a long tradition of family ski trips. Once he retired, he taught computer languages at the UNM-LA extension in Los Alamos, as well as Driver’s Safety courses for AARP.

Despite several medical misadventures, John maintained a positive outlook, and kept his sense of humor until the end. This was in character with his nature as a loving husband and father to all of his extended family.

There will be a Celebration of Life for John at Fuller Lodge in Los Alamos at 2PM on February 14th, 2018.

In lieu of flowers, the family is requesting donations be made to Planned Parenthood or the ACLU.

The family of John Richard Lilley, Sr. has entrusted the care of their loved one to the DeVargas Funeral Home & Crematory of the Española Valley. 505.747.7477, www.devargasfuneral.com.