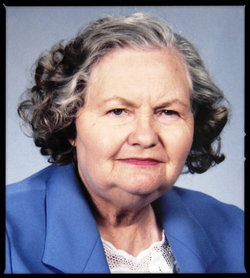 Jean Graduated from Fresno State College with a degree in education in 1948. She married Silvio J Balestrini June 22, 1948, in Berkley, California. Jean worked as a teacher and librarian while Silvio completed his PhD in physics at UC Berkeley. Jean and Silvio, with their 3-year-old son, John, moved to Los Alamos in June of 1954. In Los Alamos they raised four children. Jean was active in the PTA at Pinion Elementary and worked as a substitute teacher in the Los Alamos schools for many years. She especially enjoyed teaching math and science classes at Cumbres Junior High School. Jean was active in the Unitarian Church working as the Religious Education Director and later as a substitute secretary. She was also active in her sorority Beta Sigma Phi and was an avid bridge player.

Jean was best known for her skills as a story teller. She would tell stories of life in California, Los Alamos, White Rock and Grenoble France, where she and Silvio enjoyed a year-long sabbatical. She would recount tales of riding burrows at her father’s gold mine, of how she met Silvio in college right after WWII, and of the drive from UC Berkeley to Los Alamos for the first time on Route 66. She told of the building of the White Rock community. She and Silvio were family number 32 and worked hard to create parks, schools, and neighborhoods.

A reception to follow in the church hearth room.