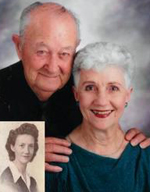 HELEN MARGARET FALKENBERG RUMINER Feb. 8, 1921 – Jan. 16, 2016
Helen Margaret Falkenberg Ruminer died peacefully on January 16, 2016, surrounded by family.
She is survived by her sister Frances Byrne, two sons and four daughters: John (and wife, Kit) Ruminer of Los Alamos, NM, Patrick Ruminer of Ponderosa, NM, Janice (and husband, Jim) Humphrey of Colorado Springs, CO, Judith (and husband, Sterling) Carter of Winston, NM, Mary (and husband Butch) Williams of Albuquerque, NM, and Kathleen (and husband, David) Funk of Los Alamos, NM. She is also survived by her 21 grandchildren, 61 great-grandchildren and 14 great-great-grandchildren.
Helen was preceded in death by her husband Coleson “Coke” Ruminer, her sisters Theresa, Lucile, Evie, Marie, and Vivian, her brother Bill, and her great-granddaughter Kensie Forrester. Helen was born on February 8, 1921 in Westcliffe, CO of Frank and Anne (Diener) Falkenberg.
She graduated Salutatorian from high school in Westcliffe in 1936 (at the age of 15) and received a scholarship to the University of Denver. She met her husband, Coke, while working on the lettuce shed during the Great Depression. They were married on November 24, 1938, and moved to South Gate, CA. After the start of WWII, Helen moved back to Westcliffe and stayed for the duration of the war while Coke was serving in the Navy. After the war, they lived in Delta, CO, and in Rifle, CO until 1951.
They moved to Los Alamos, NM, where Coke worked at Los Alamos National Laboratory until his retirement in 1976. They then moved to Albuquerque and lived there until Coke’s death in 2005. She moved to Los Alamos to live with her daughter Kathleen after Coke passed. She moved to Aspen Ridge Assisted Living in July of 2012 and joined her sister Frances at Valley Assisted Living in Westcliffe in 2014. Helen was a homemaker and mother of six.
She was active in the Catholic church, bible study group, and her china painting guild. While living in Delta, Helen was part of a bowling team and still holds the women’s record for the highest score (256). Although she played thousands of hours of cards with Coke and the rest of her family, her very favorite times were with her children, grandchildren, great-grandchildren and great-great grandchildren. We loved hearing her play the piano and we all requested a concert when we got together with her.
She continued playing after moving into assisted living. Although she suffered from dementia, her hands seemed to remember the music. There will be a celebration of her life in Westcliffe, CO, on July 30, 2016, where her ashes will be buried along side her husband, Coke, in the Ula cemetery. Should friends desire, memorial contributions may be made to Valley Assisted Living Inc. (VALI), 30 East Main Street, Westcliffe, CO, 81252. They are a non-profit business and treated Helen as though she were a family member.
We will forever appreciate the care Helen received there.
Menu
Los Alamos
55°
Fair
6:54am4:52pm MST
Feels like: 55°F
Wind: 0mph ESE
Humidity: 22%
Pressure: 30.35"Hg
UV index: 0
MonTueWed
57/36°F
59/36°F
59/36°F
Weather forecast Los Alamos, New Mexico ▸