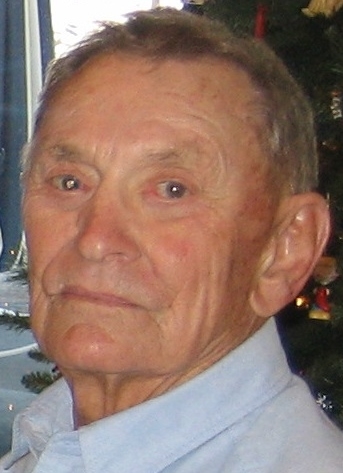 Don was born in Brookfield, Illinois on April 3, 1926. He grew up in Brookfield during the Depression with his mother and brother Richard. Even though they had no money, he had nothing but fond memories of that time.

Don enlisted in the Army Air Force in January 1944 and served until October 1945.

Don’s first professional job was with Argonne National Laboratory in 1949. While at Argonne, he attended the Illinois Technical Institute and received a Bachelor’s of Science degree in Metallurgical Engineering in 1954. Also while working at Argonne, Don met Doris Hagemann and they married in June 1950. They had two sons, Craig in 1951 and Jeffrey in 1955.

Don moved to Los Alamos in April 1962 after working for firms including General Electric in the 1950s. With the exception of one year of working for Westinghouse in 1970, Don worked at LASL (and later LANL) until his retirement in 1991. Some of Don’s notable engineering contributions were the design of fuel elements for various nuclear reactors, designing part of the Rover nuclear rocket in the 1960’s, developing the W-76 warhead in the 1970’s, and developing the W-88 warhead in the 1980’s. His one unique engineering skill was that he was able to visualize two dimensional drawings in three dimensions.

During this time, Don was able to find time to earn a Bachelor’s in Law from LaSalle Extension University in 1971. He used that knowledge after he was elected as Los Alamos County probate judge in the 1970s.

Don had a passion for sports. He became a two-handicap golfer despite having to learn with cut-down, discarded clubs that had black tape for grips. In his younger years, he could be frequently found on the golf course. Later, Don developed a passion for running. His last running event was running a marathon in 1982 and finishing second in his age group. Don was an avid skier before bad knees caught up to him, but he did get in three helicopter ski trips during the late 1970’s.

After running and skiing, Don took up biking and Master’s swimming. He won numerous awards in the 1993 Master’s Swimming Championships. His favorite event was the 200 meter butterfly. Don enjoyed biking and a biking trip across Scotland in 1990 was his favorite. Other sports passions of Don’s were fantasy baseball, which he participated in for close to 30 years and San Diego Chargers football, for which he had season tickets the last eight seasons.

Don was preceded in death by his mother Maude McCann (2003) and by his younger brother Richard (2002.) He is survived by his son Craig of Boulder, Colo., his son Jeffrey, daughter-in-law Gloria and grandson Daniel of Los Alamos, N.M.

Of all his varied interests, Don’s greatest interest and joy was in supporting his sons, daughter-in-law and grandson in all their activities.

Interment will be at 10 a.m. Thursday, May 2 at Guaje Pines Cemetery in Los Alamos. An online guestbook may be signed at http://www.riverafamilyfuneralhome.com/?pagetype=memlist.