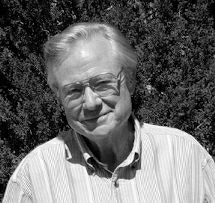 William Dunmire will present a free, 45-minute slide illustrated program that will take listeners on a tour through New Mexico’s six ecoregions and along some of the magnificent state and National Scenic Byways.

Dunmire’s program is part of the Authors Speak Series and a New Mexico Centennial Event.

From grasslands to mountains, deserts to forests, his talk focuses on the wide range of New Mexico’s landscape features.

Blue Gramma grass, apache plume, mesquite and yucca; elk, burrowing owls, and cranes are just a few of the the plants and wildlife that occur in the diverse ecoregions Dunmire explores.

His narrative, along with the stunning color photography, will provide audiences with an understanding of the elements that define the natural environments and will direct road travelers to many of the state’s best-loved natural features. 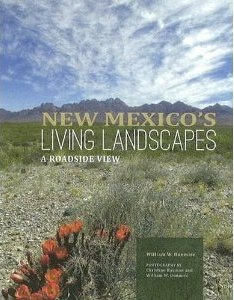 New Mexico’s Living Landscapes is a guide through the ecoregions and down the scenic byways of the state’s natural world, from grasslands to mountains to deserts, focusing on some of the most interesting landscape features and the plants and wildlife found therein.

The six ecoregions include the Chihuahuan Desert, bordering Mexico; the Great Basin Desert, spilling over from Nevada, Utah, and Arizona; the Great Plains Grassland covering the eastern prairies; the Great Basin Grassland occupying the middle Rio Grande Valley westward; the alpine Montane Forests of the Sangre de Cristo and Sandia mountains; and the Piñon-Juniper Woodlands scattered throughout the mountain bases.

New Mexico is third among states of greatest natural diversity, exceeded only by Texas and California. The elevation ranges from 2,842 feet where the Pecos River flows out of New Mexico to 13,161 at the snowy summit Wheeler Peak.

A gamut of geological substrates and soil types provide a wide range of growing conditions for plants. More than nine-tenths of New Mexico’s land remains in native or near-native condition, unchanged by human hands.

This colorfully illustrated book provides readers with an understanding of the natural elements that define the environments of New Mexico .

Dunmire is a  graduate of the University of California, Berkeley, with degrees in wildlife management and zoology.

He served 28 years in the National Park Service, mostly as a naturalist in a number of parks including Yosemite, Hawaii Volcanoes, Yellowstone and Carlsbad Caverns, where he retired as superintendent in the mid-80s.

For seven years he was a field biologist with The Nature Conservancy in New Mexico.

Dunmire is a professional nature photographer and author of numerous natural history publications, including co-author of award-winning Wild Plants of the Pueblo Province (1995) and Wild Plants of the Four Corners (1997), both Museum of New Mexico Press and Mountain Wildflowers of the Southern Rockies: Revealing Their Natural History (2008, UNM Press.)

He is the author of Gardens of New Spain: How Mediterranean Plants and Foods Changed America (2004, University of Texas Press), and New Mexico’s Living Landscapes: A Roadside View (2012, Museum of New Mexico Press.)

Dunmire is an Associate in Biology at the University of New Mexico and a Research Associate at the New Mexico Museum of Natural History & Science. He and his wife Vangie live in Placitas, N.M.

William Dunmire’s Centennial book tour is made possible in part by a grant from the New Mexico Humanities Council.

The Authors Speak Series is a monthly event featuring local and statewide authors speaking about their writing on a variety of subjects such as local and state history, travel, outdoor activities, New Mexico fiction, history and cultures of New Mexico, poetry, and more.