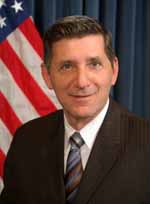 National Drug Control Policy Director Michael Botticelli
STATE News:
WASHINGTON, D.C. ― National Drug Control Policy Director Michael Botticelli will travel to Albuquerque Thursday, Aug. 18, to host a community forum on evidence-based programs to prevent and treat prescription drug misuse and heroin use.
This is one of a series of forums across the country that will continue the conversation that President Obama began in West Virginia in October of last year, when he announced new public and private sector efforts to address the opioid overdose epidemic.
Director Botticelli will join U.S. Rep. Ben Ray Luján for a conference call today with members of the press in advance of the community forum.
Community Forum
Pre-event Speakers
To view a livestream of the community forum, tune in to: http://hscmediasite.unm.edu/mediasite/Play/c654b3aa85494a9b9ceb77e87295daf11d

For more information about the Office of National Drug Control Policy visit: http://www.whitehouse.gov/ondcp

About Michael Botticelli:
Botticell was sworn in as Director of National Drug Control Policy at the White House Feb. 11, 2015, after being unanimously confirmed by the Senate. He joined the White House Office of National Drug Control Policy (ONDCP) as Deputy Director in November 2012 and later served as Acting Director.
As Director of National Drug Control Policy, Botticelli leads the Obama Administration’s drug policy efforts, which are based on a balanced public health and public safety approach. The Administration has advanced historic drug policy reforms and innovations in prevention, criminal justice, treatment and recovery.
In response to the national opioid epidemic, Botticelli has coordinated actions across the Federal government to reduce prescription drug abuse, heroin use and related overdoses. These include supporting community-based prevention efforts; educating prescribers and the public about preventing prescription drug abuse; expanding use of the lifesaving overdose-reversal drug naloxone by law enforcement and other first responders; and increasing access to medication-assisted treatment and recovery support services to help individuals sustain their recovery from opioid use disorders.
Botticelli has been in long-term recovery from a substance use disorder for more than 26 years. He has encouraged the millions of Americans in recovery today to make their voices heard and confront the stigma associated with substance use disorders, which often keeps individuals from seeking and receiving treatment.
Botticelli has more than two decades of experience supporting Americans affected by substance use disorders. Prior to joining ONDCP, he served as Director of the Bureau of Substance Abuse Services at the Massachusetts Department of Public Health, where he successfully expanded innovative and nationally recognized prevention, intervention, treatment, and recovery services for the Commonwealth of Massachusetts. He also forged strong partnerships with local, state, and Federal law enforcement agencies; state and local health and human service agencies; and stakeholder groups to guide and implement evidence-based programs.
Botticelli has served in a variety of leadership roles for the National Association of State Alcohol and Drug Abuse Directors. He was a member of the Advisory Committee for the Substance Abuse and Mental Health Services Administration’s Center for Substance Abuse Prevention and the National Action Alliance for Suicide Prevention. He has also co-authored many peer-reviewed articles that have significantly contributed to the field.
Born in Upstate New York, Botticelli holds a Bachelor of Arts degree from Siena College and a Master of Education degree from St. Lawrence University.
LOS ALAMOS