A team of students from Los Alamos High School is competing this week in the U.S. Department of Energy’s National Science Bowl (NSB) in Washington, D.C. and has advanced to the “sweet sixteen” from an original field of 69 high school teams from across the country. 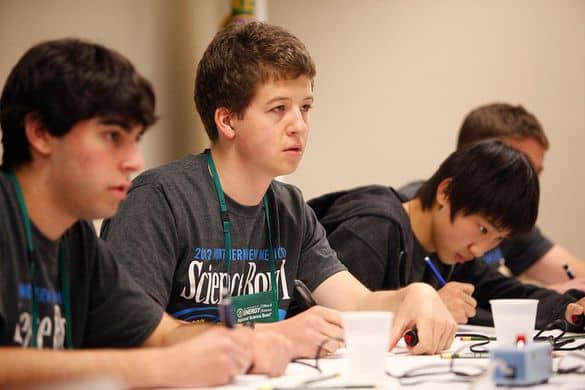 Members of the Los Alamos High School team, Los Alamos, NM concentrate on the answer to a question at the U.S. Department of Energy National Science Bowl in Washington DC on April 29, 2012. Photograph by Dennis Brack, U.S. Department of Energy, Office of Science/Courtesy
The National Science Bowl is a nationwide academic competition that test’s student’s knowledge in all areas of science.  Teams are quizzed in a fast paced question-and-answer format similar to that of the TV show Jeopardy.  Teams are composed of four or five students and a teacher who serves as an advisor and coach.
As one of the top sixteen teams, Los Alamos High School has already won $1,000 for their school’s science department.  They will go on to compete for the high school championship which will conclude on Monday.  The first place prize in this year’s competition is a trip to Alaska and the second place price is a tour of Great Salt Lake Park, Yellowstone National Park, and Grand Teton National Park.
The final rounds of competition in this year’s NSB will be webcast from the National Building Museum on Monday, April 30. You can watch the webcast live beginning at 9 a.m. at: mms://wm.streamingmediahosting.com/netl-live-1.
Menu
LOS ALAMOS