Letter to the Editor: ‘Silver Bullet’ For Energy Problem

By ROY M. MOORE
Los Alamos
Dear Mr. President:
Perhaps the greatest myth of our society is that there is no “silver bullet” to solve the energy problem.
Nothing could be farther from the truth, and mankind has known for decades that the proper way to store renewable energy is by making hydrogen from water and then burning this at your convenience.
If you think about it, everything that we burn is a hydrocarbon. But combustion only requires the hydrogen, so currently we burn hydrocarbons and take the carbon along for the ride. This is what has caused the rapid rise in CO^2 in our atmosphere and led to the drastic climate change we are now experiencing.
Renewable hydrogen burns without pollution, can replace every form of energy we currently use, is the perfect duel fuel for conversion of older engines and plants, and once the equipment is paid for, can be renewably produced for decades with only the cost of maintenance.
As an example, I have included a diagram that shows how to convert the Navajo Power Station in the 4 corners area, from a coal-fired generation station to a renewable hydrogen station that can operate without additional fuel for decades, if not centuries.
The process is simple. We start installing solar panels on a grand scale. I don’t have the Internet, so all my calculations have been made from memory, but I’ve calculated that we would have to cover approximately 40 square miles around the plant with solar panels. (This would mean we would have to install between 10 and 20 thouand panels a day, to finish the project in 10 years. Think of the clean jobs this would create.)
Instead of converting the DC power to AC, as is the common practice now, we would use the native direct current to convert water to hydrogen and oxygen directly at the solar panel. This would make the system very efficient with almost no loss of energy. 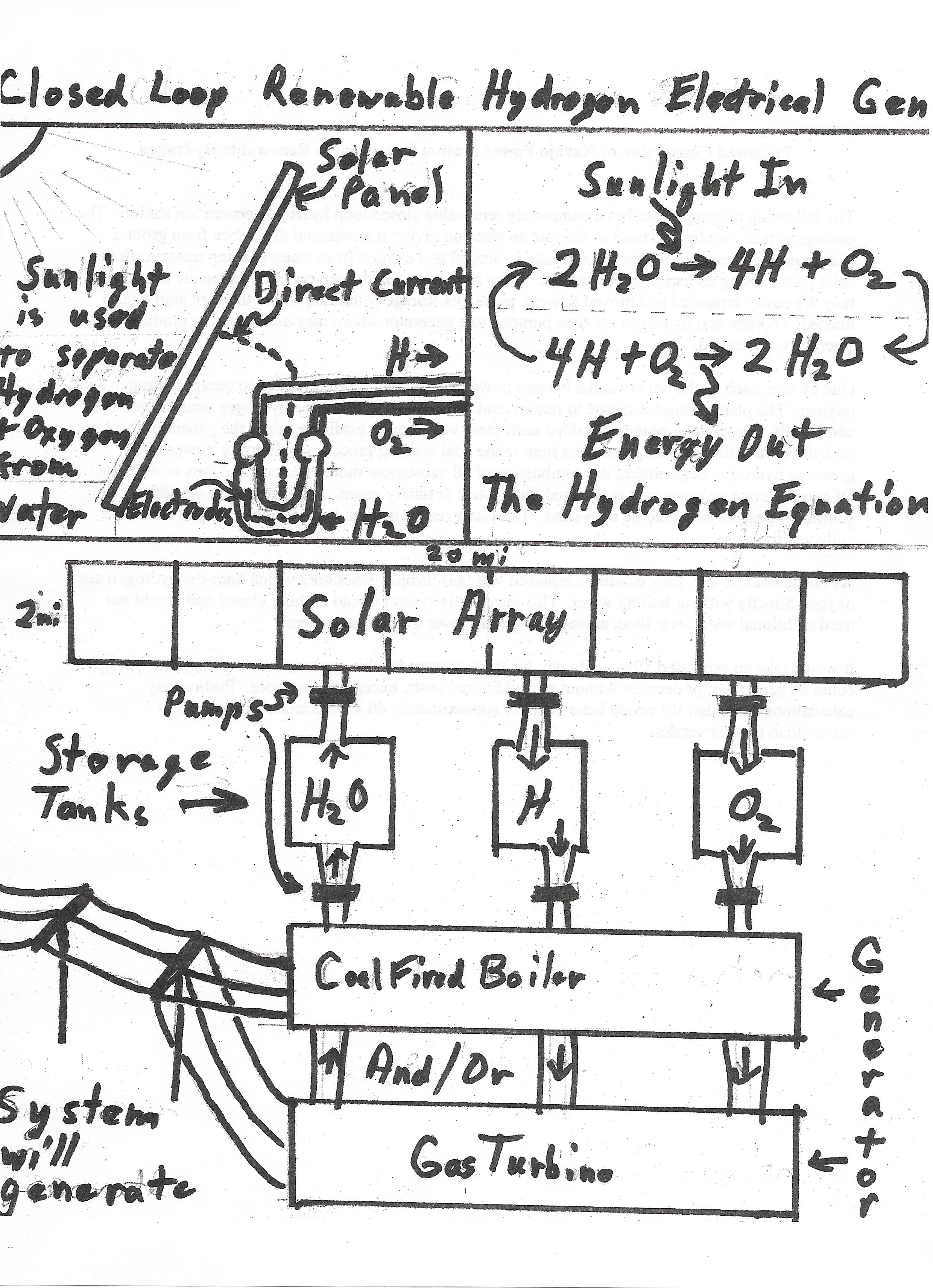 Once this hydrogen is created, it would be pumped to a storage facility and eventually pumped to the boilers to help with the combustion process.
Everything burns cleaner with hydrogen, so even a small amount of hydrogen would reduce the pollution from the plant. And, of course, as we add more and more panels and produce more hydrogen, the plant would burn ever cleaner until eventually, we would burn only hydrogen and the coal part would be eliminated completely.
As the generators age, they would be replaced with gas turbine generators that would burn the hydrogen directly and not involve boiling and wasting water. This system would then be a closed system that would reuse the same water over and over, in an infinite process where sunlight creates hydrogen which is burned as needed to supply reliable electricity to all.
PNM, the power company that runs the plant, wants to close 2 generators and leave 2 others burning coal, I guess forever. Then they want to buy atomic power from Arizona to make up the difference.
Please compare their plan with my plan and tell me which one is best. If you would lead us to a renewable hydrogen society, I’m sure your reputation would rise in the view of all mankind. It is stupid to continue the hydrocarbon society, which destroys the Earth and all life, when we can act intelligently and move immediately to renewable hydrogen. Please help in this matter.
Menu
Los Alamos
30°
Sunny
7:08am5:27pm MST
Feels like: 25°F
Wind: 6mph SSE
Humidity: 58%
Pressure: 30.24"Hg
UV index: 3
FriSatSun
36/19°F
43/25°F
41/23°F
Weather forecast Los Alamos, New Mexico ▸