Letter To The Editor: CO2 And Global Warming

By JOEL M. WILLIAMS
Los Alamos
On Tuesday, Gov. Brown of California signed a pact with 11 other states and countries to slash greenhouse gas emissions and tackle climate change.
The non-binding agreement pledges to reduce greenhouse gas emissions 80 to 95 percent below 1990 levels by 2050 (click here). AUN summit on climate control will take place in Paris later this year.
I previously sent a letter to the Los Alamos Daily Post entitled: “Can Mankind Really Expect to Tame Earth’s Climate and Remove It from Cosmic Control?” (click here). This letter provides an mended summary and an addendum for that letter. References are not included here, but are available in a pdf formatted version of the combined letters (click here).
Summary:
I spent a number of years studying environment pollution related to coal and uranium wastes for EPA and DOE at the Los Alamos National Laboratory. I might be included with the “97%” of scientists that say mankind is causing “our climate to change” – depending on how the questions are phrased. When the American Meteorological Society did a survey and specifically asked “Is man the dominate controller of climate over the last 50 years?”, the response was only 52% “yes”. John Christy, others and I would now be in the negative half.
I suspect that “climate change” and “environmental pollution” are not very well delineated. Air pollution that extends 10s of thousands of feet upwards is hard to miss. I went through Gary, IN, back in the 1960s when the sky was bright orange and the sun set well before it went below the horizon. Media often show citizens of Beijing wearing masks because of the extremely poor air quality. Citizens of Beijing would very likely say that “human activity” is changing their “climate”. These are examples of mankind’s polluting the environment and not of global climate changes per se. The greenhouse effect of CO2 generated by massive levels of coal and petroleum combustion to produce electricity makes common scientific sense.
It is the magnitude of the effect of such pollutions on a global scale and the non-human effects that are the issues. Having delved into the matter, it is not clear that we are destined for a 2°C rise over the current global level when the natural repetitive cycle should be in the declining stage of a 100-century thermal cycle.
One might ask this question: what would the average global temperature be “right now” if all of the CO2 generated by mankind in the last 300 years were “instantaneously” removed from the atmosphere?
The answer might be chillier! There is NO DENYING that human activities are polluting the environment! Pollution IS something mankind can moderate! Global climate control is something else!
Addendum:
The figure below is from John Christy of the University of Alabama – Huntsville. A version of this plot with only the average of the computer outputs and the actual observations was presented by him on May 13, 2015 to a congressional committee. [An earlier version is included in a University of Arizona atmo336 course lecture, which is a good read on modeling and variables.]
The error bar for the observed data is ~±0.08ºC. Note that the measured global temperature has been nearly “flat-lined”, within data error, for the past decade. Christy’s figure highlights that almost every model -32 were evaluated – makes predictions that greatly deviated from actual observations for the past two
decades with the extrapolated divergences becoming greater with time! It is clear that all of the models, except Russian INM-CM4 (marker added by JMW), have been going off on a tangent since 1995!
If CO2 has an effect as great as these models would indicate, then the models are greatly underestimating something with an equalizing opposite effect. As pointed out earlier, if observed data is NOT precisely modeled within their error bars, then the predictions of the model, even into the next decade, must be viewed with a great deal of consternation! 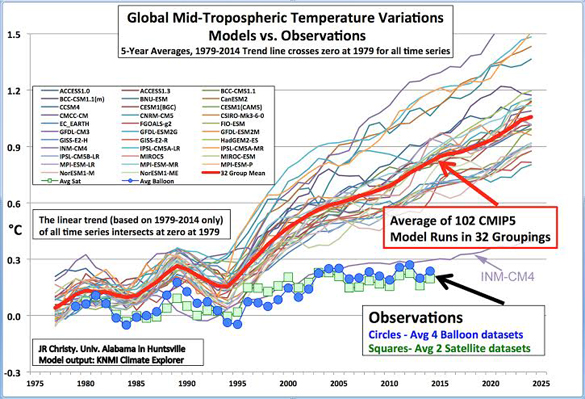 The “greenhouse effect of CO2” is a major component of the models. CO2 is released from ocean water as global temperature increases – physical chemistry. Since landmass surfaces warm faster than circulating ocean water, CO2 releases will lag overall global temperature rise. CO2 atmospheric levels rise even without human intervention. Mankind’s adding extra CO2, as it is doing now, does not necessarily mean that the global temperature, which is strongly cosmically controlled, will dramatically increase.
CO2 return to colder ocean water is slow – diffusion controlled at the surface layer – and will lag the global temperature decrease as the oceans cool slower than landmass surfaces. Unabsorbed CO2 will keep the level higher for the next “heat wave”.
The models emphasize what they would predict on a very short time scale (35 years) with a reference to “1980” as the baseline. Significant ups and downs in global temperatures on a decade scale without massive human contributions to atmospheric CO2 levels are clearly evident in the Vostok ice core data.

Future CO2 levels are said to be of considerable concern. The graph on the left of the figure on the right emphasizes a steep increase relative to the level in 2000AD.
Exponential projections are often presented beyond this time period. But even 5 years from now, at 2020, the rise in CO2 levels looks dire. When the same data is plotted on a total CO2 level scale (graph on the right of the figure), an increase in CO2 level is still apparent, but the increase hardly suggests the same alarm.
As noted in my previous letter, the global temperatures over the past millennium have been mild and relatively constant compared to those of the other “heat waves” of the past 400,000 years. To put things in perspective, I have placed the last 35 years of satellite-derived global temperatures from Christy’s plot on a scale with the Vostok ice core data for the past 300 years – the red data in the white box in the figure below. For further couching of the past 35 years of observed data, the mean global temperature for the last millennium and its sigma spreads [1 sigma (68% of the data), 2 sigma (95%) and 3 sigma (99.7%)] are demarcated. 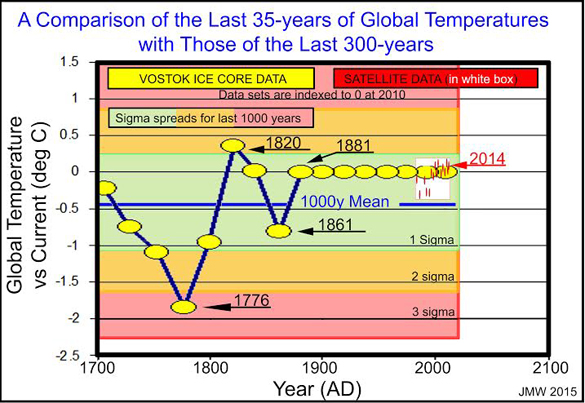 Some information that can be gathered from this figure:
Climate change and droughts are VERY serious stuff for countries and regions that are adversely affected; esp, those with extensive agricultural activities.
Forces that oppose any CO2 effect to keep the global temperature constant will still be there, even if CO2 emissions are reduced.
People tend to forget that decade-long droughts are fairly common and have occurred throughout documentable history. Have a look at the US National Oceanic and Atmospheric Administration’s own website entitled “North American Drought: A Paleo Perspective”(https://www.ncdc.noaa.gov/paleo/drought/drght_history.html). Current CO2 levels were NOT the cause of past droughts! Since Planet earth is cosmically controlled and the oceans and atmosphere are fluid, LONG-TERM CLIMATE CONDITIONS ARE NOT CONSTANT.
Menu
Los Alamos
36°
Fair
6:39am5:56pm MST
Feels like: 28°F
Wind: 9mph SSW
Humidity: 37%
Pressure: 30.09"Hg
UV index: 0
ThuFriSat
39/27°F
46/28°F
45/27°F
Weather forecast Los Alamos, New Mexico ▸