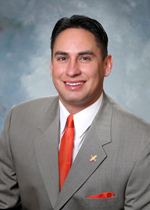 Sen. Howie Morales
STATE News:
SANTA FE ― New Mexico State Senator Howie Morales (D-28-Catron, Grant & Socorro), other legislative sponsors, and law enforcement officials from State, City of Albuquerque and Bernalillo County law enforcement introduced promising legislation to stem the wave of auto-theft across the state, and to help catch criminals engaging in it.
Senate Bill 139 and its companion, House Bill 177, will strengthen law enforcement’s ability to gather and share information about potentially stolen vehicles.
“Families depend on their cars to get to school and work, to access medical care and to go about their daily lives. They are faced with huge burdens when their vehicles are stolen,” Morales said. “This legislation will help us to substantially reduce auto theft, and attack the time lost, and the financial and psychological burdens of this rampant crime on the people of our State.”
More than 8,500 vehicles were reported stolen in the state of New Mexico in 2015. Albuquerque holds the alarming distinction as the #1 metro area in the U.S. reporting the highest rate of car theft, with more than 6,000 thefts there alone.
The legislation will help aid investigations and recovery of stolen vehicles by partnering with automotive recyclers in the state. The bill creates a system for auto recyclers to verify with MVD, at the time of transaction, that the vehicle being considered for purchase is not stolen.
The legislation’s bipartisan sponsors include Sen, Howie Morales, Rep. Monica Youngblood (R-68-Bernalillo), and Rep. Patrico Ruiloba (D-12-Bernalillo), and Rep. Bill Rehm (R-13-Bernalillo). State Police Chief Pete Kassetas, Bernalillo County Sheriff Manuel Gonzales and Detective Ken Miller of the Albuquerque Police Department all expressed their strong support for SB 139 and HB 177.
Bill Highlights:
Provides a preventive and cost-effective solution to the alarming rise of auto theft in the State. The reporting procedure is an efficient system that streamlines communication among auto recyclers, the State and law enforcement. At no additional costs to taxpayers, this consumer protection legislation equips law enforcement with the necessary information to prevent further criminal activity.
Safeguards motor vehicle owners and auto recycling businesses by pre-screening targeted motor vehicles and prospective sellers. The information collected at the point of sale allows law enforcement to trace back the stolen vehicle and the unscrupulous individual attempting to sell it.
Prevents and reduces auto theft activity by exposing criminals and strengthening penalties. Criminals find the retail value of motor vehicles and/or its parts to be attractive. The high risk of being identified at the point of sale in addition to the profits vs. penalty ratio would swiftly deter criminals from auto theft activity.
Simplifies the reporting process, encouraging auto recyclers to comply and serve as a liaison with law enforcement. Auto recyclers serve as the stop point to prevent and reduce criminal activity in their communities.
Centralizes information to facilitate the networking between state and national intelligence, crime prevention and law enforcement agencies.
Similar programs in other states have provided swift and significant results. In North Carolina, the Division of Motor Vehicles’ License and Theft Bureau received 41 reports of stolen vehicles in the system’s first month of implementation. As a result, 22 of those stolen vehicles were stopped from being sold to salvage yards, 19 were confiscated following sales. The Bureau also recovered 33 vehicles and uncovered three fictitious IDs in the course of their investigations.
Menu
Los Alamos
57°
Fair
6:57am6:53pm MDT
Feels like: 57°F
Wind: 5mph SW
Humidity: 18%
Pressure: 30.13"Hg
UV index: 0
SunMonTue
79/41°F
61/43°F
72/46°F
Weather forecast Los Alamos, New Mexico ▸
Previous
Next