LACA to Present One of the World’s Most Celebrated Vocal Ensembles: The King’s Singers 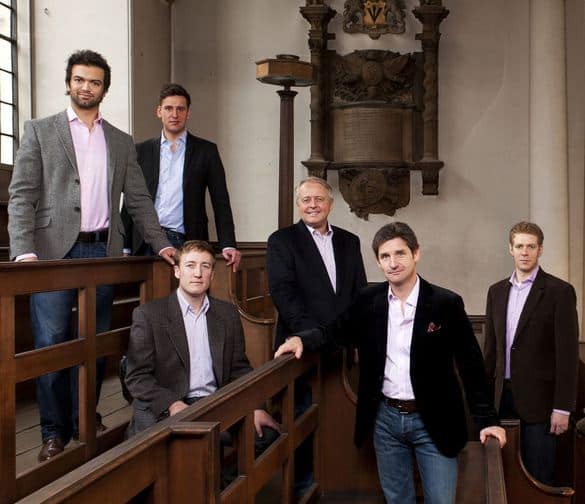 On March 10, the Los Alamos Concert Association presents one of the world’s most celebrated vocal ensembles, The King’s Singers, as the fourth concert in LACA’s 65th anniversary season. Describing their appearance at the Sheldonian Theatre in Oxford, Alexandra Coghlan wrote “with a flawless blend and a balance of playful showmanship and sophisticated musicality…, the six-piece ensemble are superstars to a man.”

The King’s Singers have a packed schedule of concerts, recordings, media and education work that spans the globe. Championing the work of young and established composers, they remain consummate entertainers; a class-act with a delightfully British wit.  From Gesualdo and György Ligeti to Michael Bublé, The King’s Singers are instantly recognizable for their spot-on intonation, impeccable vocal blend, the flawless articulation of the text and incisive timing.

In addition to their concerts worldwide, The King’s Singers share their artistry through numerous workshops and master classes. Their arrangements are sung by schools, college choirs and amateur and professional ensembles the world over.

Grammy Award winners in 2009 for their album Simple Gifts, the King’s Singers boast a discography that now includes over 150 best-selling recordings. Recent examples include Swimming over London, released in 2010 alongside a world premiere recording of Music for Vespers by Pachelbel with Charivari Agréable.  While touring the USA in February 2010,

The King’s Singers recorded an album with the renowned Concordia College Choir.  This CD, High Flight, is the inspiration for the Los Alamos program. The concert will feature music by three renowned contemporary choral composers, Eric Whitacre, Bob Chilcott (which includes pieces commissioned by the King’s Singers) and Morten Lauridsen. These works explore aspects of life and faith, setting both sacred and secular texts.

The rest of the program provides contrasting works from the sixteenth and twentieth centuries, which are linked by the less lofty themes of love and human weakness. The King’s Singers like to end their program with selections from the lighter side of the repertoire, which might consist of anything from arrangements of folk songs and spirituals, to standard evergreens, music from stage & screen, and contemporary pop songs.

Or the IMG Artists web site at http://imgartists.com/artist/thekingssingers