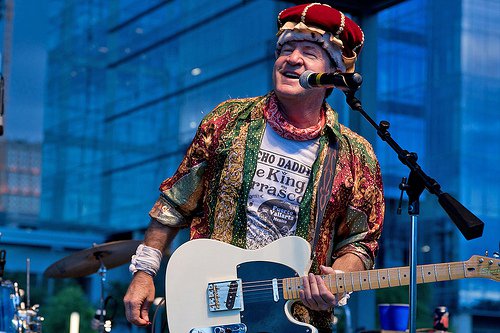 In the late 1970’s changes came in rock/pop/punk music. It was the post-punk and disco era. One popular subgenre in rock was dubbed New Wave. Some of the stars of this scene were the Talking Heads, Elvis Costello, The Cars, Blondie, B52s, a-ha, Duran Duran, Inxs, The Cure, The Police, Bow Wow Wow, XTC, Siouxsie & the Banshees and many, many more. (Sorry if I left your favorite off this small list and sorry if you disagree with this description of the above bands. I also apologize to the pigeons if I’m politically incorrect in saying, you can’t pigeon hole a good or great band.)

New Wave music was MOSTLY pop dance music. It incorporated aspects of electronica and experimental music. It was often called synth-pop. The music was less angry than Punk but it had an attitude. It was mostly celebratory, energetic, fun, quirky, irreverent, playful, rowdy and a bit punk. Saturday night, July 6, the Los Alamos County Summer Concert Series will be at Ashley Pond with the New Wave, Tequilla reggae, punk, surf rock, and Tex-Mex superstar rocker, Joe King Carrasco. Just between us, if you like or love the Red Elvises, Los Alamos’ favorite band, you’re gonna flip out over this show. Both are driven by keyboards, a whole lotta dance fun and wacky. The Red Elvises are Russian-American compared to Tex-Mex. The King was first and formed his band, the Crowns in 1979. Our show is a part of the Crowns Reunion Tour.

The King played the infamous CBGB, Manhattan’s original hardcore and punk rock club many times in the 70’s & 80’s. When MTV came out on television in 1981, Joe King’s “Party Weekend” was a staple video on the new channel. “Rolling Stone Magazine” interviewed him. He was a guest on “Saturday Night Live”. Michael Jackson, the King of Pop sang harmony on his song “Don’t Let A Woman (Make a Fool Out Of You).”

His first couple of albums sold fairly well but it was the live shows that the fans and critics really loved. On an album, you don’t get Joe jumping on your table or crowd surfing or stage diving. This Friday you’ll get a celebration, a great party at the Pond. Chuck Prophet and Mission Express had a fantastic rock show at Pajarito Ski Area last Friday night. The Red Elvises and the Police Experience have rocked Ashley Pond this year with incredible concerts. We’ve had a number of truly great performances this summer. I won’t be surprised if Joe King Carrasco and the Crowns put on one of the best concerts Los Alamos has ever had.

Joe Carrasco grew up in Dumas, Texas. He now lives in Puerto Vallarta and often plays in the nightclub he owns there. A whole lotta folks say that he’s still the #1 party act on the planet.
This Friday will be LA Monitor Night and we thank them for being a sponsor for all 23 years of the Series. Come on out and thank them and catch what I’m sure will be one of the greatest shows you’ve ever seen. I have no doubt about this. You know what makes a great concert? It’s you, your energy, your dancing, and your funny smile and laughs. Ask Joe.

Next Friday night, July 1, the Concert Series presents the Shinyribs at Ashley Pond. This will also be a wild Texas rock and roll show.