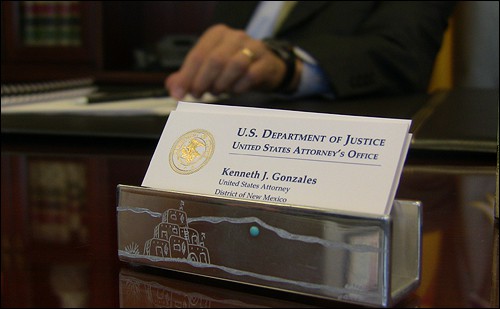 “We have zero tolerance for drug trafficking in Indian Country,” said Ken Gonzales, New Mexico’s U.S. Attorney. “We’ve made it a priority … to lower, if not eliminate, our thresholds to take these cases.” Courtesy/FBI

The arrest of a 20-year-old Zuni woman for selling two baggies of cocaine that each contained less than one gram of the drug might be considered a minor offense in many jurisdictions—but in Indian Country, federal prosecutors are taking a different approach.

Because alcohol and drugs fuel serious crimes on the reservation, and because public safety is at stake, Gonzales sees the no tolerance program as an important part of his office’s efforts to fight crime on the reservations.

“If you identify somebody in the community who has been causing problems for years and years, has rotated in and out of the criminal justice system and is nevertheless out on the street causing big problems,” Gonzales said, “we will take that case if the individual is caught trafficking drugs, no matter what the amount. In most instances,” he explained, “we require a certain amount of drugs to be able to prosecute a case federally. But we’ve made it a priority in Indian County to lower, if not eliminate, our thresholds to take these cases.”

The 20-year-old Zuni woman, who was recently sentenced to a year in prison for cocaine trafficking, “had a significant tribal court history and was clearly a problem in the community,” Gonzales said, which is why the FBI and the U.S. Attorney’s office got involved.

“When you take even one of those bad actors out of the community, you’ve made a big impact,” said Special Agent Lenny Johns, who supervises our Santa Fe Resident Agency. “We have a very close working relationship with the U.S. Attorney’s Office on the no tolerance program—and other programs—and we are very proud of the results of that partnership.”

“Having the FBI and federal prosecutors working in a side-by-side partnership to identify unique cases that impact the community—which we are finding to be gang cases and drug trafficking—and targeting those cases for fast-track investigation and prosecution has really made a difference,” Johns added.

Coupled with other initiatives such as the Tribal Law Enforcement Act—passed by Congress in 2010 to strengthen law enforcement on the reservations and enable tribal courts to hand down stiffer sentences—Johns and Gonzales believe the federal justice system is making an impact in Indian Country, even though they acknowledge there are many challenges. 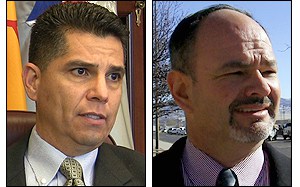 “The Department of Justice can do a lot to prosecute crime,” Gonzales said. “With the help of the FBI, the Bureau of Indian Affairs, and our local tribal law enforcement partners, we can investigate and take troublesome people out of the community for extended periods of time. In that way, we are also doing a lot to prevent crime. It’s all part of our overall anti-violence strategy.”

“There is no question that a serious crime problem exists in Indian Country,” Johns said.

“The bottom line in all our efforts,” he added, “is that we are dedicated to making sure that innocent people on the reservation are not victimized.”

In addition to enforcing federal laws in Indian Country, the FBI provides other valuable services to communities, including support to victims.

Victim specialists in our Office for Victim Assistance are a critical part of the Bureau’s role in Indian Country, helping victims and their families obtain social services and keeping them informed about court dates and other legal proceedings as cases are investigated and go to trial.

“If we investigate a homicide and the family of the deceased needs assistance, we will call out our victim specialist,” said Special Agent Mike Harrigan, who supervises an Indian Country squad in New Mexico. “They will come out to the scene, no matter what time of day or night, get with the family, and start providing assistance on the spot. Victim specialists are able to provide funding, supplies, clothing, and information about available social services programs.”

As a case moves forward, Harrigan added, the victim specialist follows up “and will continue to contact the victim’s family to provide additional services. It’s really a partnership between investigators and victim specialists,” he explained. “Without them there to help the families, it would be almost impossible for us to do our job as investigators.”

About This Series
Nationwide, the FBI is responsible for investigating the most serious crimes within Indian Country and has investigative responsibilities on about 200 reservations. FBI.gov recently visited New Mexico for a firsthand look at how the Bureau and our partners fight crime on tribal lands. 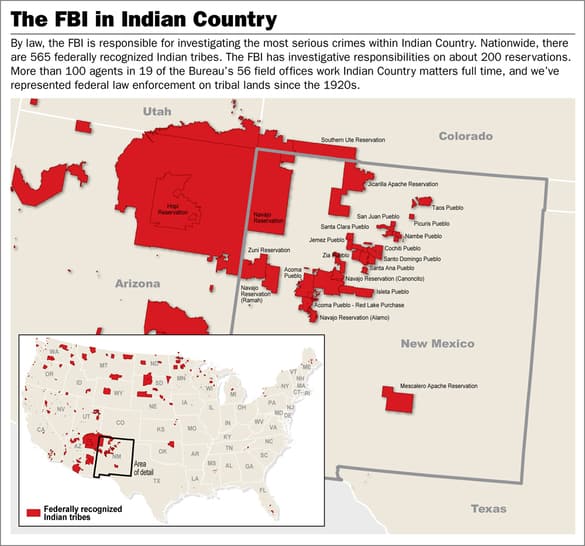