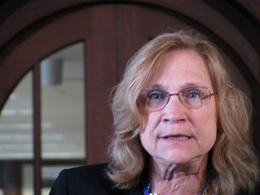 Jane Sánchez reading at a Juneteenth Book Festival Symposium Library of Congress. Courtesy/wkimediacommons
LIBRARY OF CONGRESS News:
The Librarian of Congress, Carla Hayden, has announced that Jane Sánchez, the chief of Humanities and Social Sciences at the Library of Congress, has been named the Law Librarian of Congress.
Sánchez, who holds a Juris Doctor degree in addition to a master’s degree in Library Science and a bachelor’s degree in English, has led the Humanities and Social Sciences division at the Library of Congress since 2014.
She also has served as a business unit managing director at the U.S. Government Publishing Office; as an associate director of justice libraries, Justice Management Division, U.S. Department of Justice; as departmental head of History & Culture Libraries at the Smithsonian Institution Libraries; and as an acquisitions manager for electronic databases at BNA, Inc., a journalistic organization, in addition to library work at Harvard and the University of New Mexico.
Sánchez will succeed Roberta Shaffer, who is retiring after serving as Law Librarian since Feb. 21 of last year. Shaffer held the job on an acting basis for five months prior to that, and had served previously as the Law Librarian of Congress from August 2009 through November 2011.
“Jane Sánchez will bring an excellent breadth and depth of experience to the Law Library of Congress,” said Librarian of Congress Carla Hayden. “The Law Library is a key resource for Congress and the legal community in the nation’s capital, and her specific skills will be well-deployed there.”
Sánchez became chief of Humanities and Social Sciences at the Library in October 2014. The division provides research service in the Library’s Main Reading Room, its Local History and Genealogy section, its Digital Reference Team and its Microform and Electronic Resources Center. Under her leadership, services to researchers have expanded and outreach through the division’s RSS feed has led to more robust use of the collections and services.
She has received numerous awards over the course of her career, including from the U.S. Department of Energy for sustained superior service and from the Justice Management Division and the Smithsonian Institution for workflow improvements.
Sánchez holds a Juris Doctorate from American University’s Washington College of Law, a Master’s of Library Science from Simmons College in Boston and a Bachelor of Arts in English from the University of New Mexico, Albuquerque, New Mexico.
The Law Library of Congress was founded in 1832, with the mission of making its resources available to members of Congress, the Supreme Court, other branches of the U.S. government and the global legal community, and to sustain and preserve a universal collection of law for future generations.
With more than 2.9 million volumes, the Law Library contains the world’s largest collection of law books and other resources from all countries and provides online databases and guides to legal information worldwide through its website at www.loc.gov/law/.
Menu
Los Alamos
48°
Fair
7:22am6:15pm MDT
Feels like: 45°F
Wind: 7mph S
Humidity: 49%
Pressure: 29.89"Hg
UV index: 0
WedThuFri
54/34°F
59/39°F
63/41°F
Weather forecast Los Alamos, New Mexico ▸