July 24, 1969, aboard the USS a happy President Richard M. Nixon laughs with astronauts, from left, Neil A. Armstrong, Michael Collins and Buzz Aldrin as they exchange greetings through the window of the Mobile Quarantine Facility. Courtesy/Bettmann/CORBIS 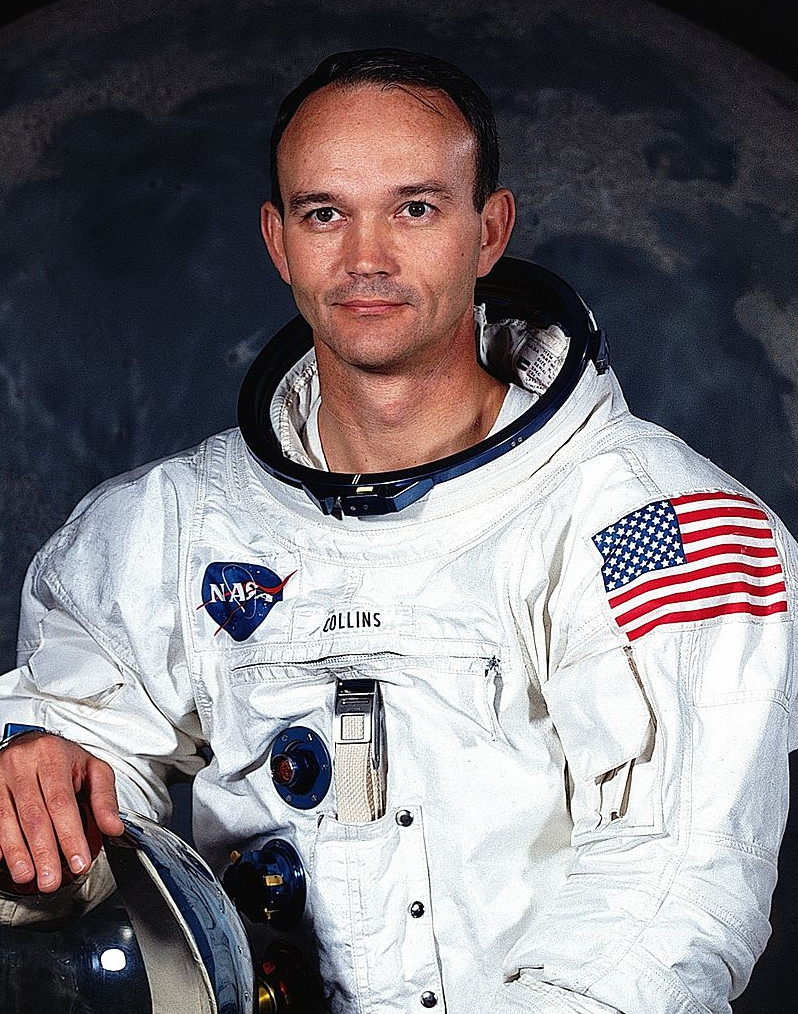 Collins was inducted into the International Space Hall of Fame at the New Mexico Museum of Space History in 1977.

The New Mexico Museum of Space History, International Space Hall of Fame Foundation, and staff send their deepest condolences to the family and friends of General Collins.

Collins was born October 31, 1930, in Rome, Italy. His father was a major general in the U.S. Army and Collins grew up in Italy, Oklahoma, New York, and Puerto Rico. He graduated from Saint Albans School in Washington, D.C. and received a Bachelor Science degree from the United States Military Academy, West Point in 1952.

Collins entered the U.S. Air Force after leaving West Point. He served as an experimental test pilot at the Air Force Flight Test Center at Edwards Air Force Base in California from 1960 to 1963, logging more than 5,000 hours flying time.

Inspired by John Glenn’s historic spaceflight in 1962, Collins applied for NASA’s astronaut program and was chosen as part of the third group of astronauts in October 1963. Collins was the pilot on the three-day Gemini X mission in 1966, and became the third American to walk in space, completing two extravehicular activities. Gemini X set a world altitude record and Collins became the first person to perform two spacewalks on one flight. He shared these accomplishments and others from the flight with John Young, who commanded the mission.

Collins’ second spaceflight was as Command Module Pilot of the spacecraft Columbia during the history making Apollo 11 lunar landing mission. The flight launched from Kennedy Space Center on July 16, 1969, with Collins, Neil Armstrong, and Edwin “Buzz” Aldrin aboard. Collins remained in lunar orbit while Armstrong and Aldrin became the first men to walk on the Moon. July 21, Collins performed the final re-docking maneuvers following a successful lunar orbit rendezvous with Armstrong and Aldrin after Eagle’s ascent from the lunar surface. The safe return to Earth of Apollo 11 July 24, 1969, marked the last spaceflight for Collins, at his request.

Upon leaving NASA in 1970, Collins became Assistant Secretary of State for Public Affairs. The next year, he joined the Smithsonian Institution as Director of the National Air and Space Museum, responsible for planning and construction of the new museum building, which opened in 1976. He went on to become Undersecretary of the Smithsonian Institution and, in 1978, retired from the Air Force Reserve with the rank of Major General in 1982. General Collins was awarded the Presidential Medal of Freedom, the NASA Exceptional Service Medal, the Air Force Command Pilot Astronaut Wings, and the Air Force Distinguished Flying Cross. Asteroid 6471 Collins is named in his honor.

The New Mexico Museum of Space History, a Smithsonian Affiliate, is a division of the NM Department of Cultural Affairs. For more information, call 575.437.2840 or toll free 1.877.333.6589 or visit the website at www.nmspacemuseum.org.