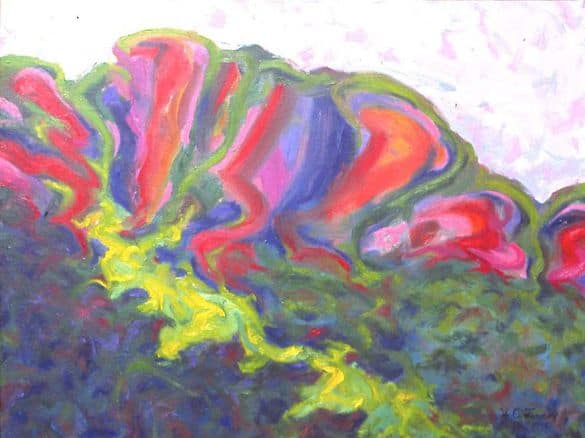 Henry Finney is truly a Renaissance man: artist, writer, anthropologist, Zen meditation teacher, educator, husband and parent. All of these parts combine in the current exhibition to create a compelling visual and spiritual experience for the viewer.

In 2011, Finney published a book of his poetry, The Fire Gate Poems: A Journey of Spiritual Healing. The poems in the book represent a progression, a journey, through loss, grief, and recovery. It seems particularly appropriate to present this exhibition at the one year anniversary of the start of the Las Conchas fire here in Los Alamos.

The communities of Los Alamos, San Ildefonso, Jemez and the entire region have also experienced a similar progression, and may be beginning to transition to a time of recovery, renewal, and spiritual healing.

Join Henry Finney at his opening reception during the special Los Alamos Friday Night Out at Mesa Public Library 7-8:30 p.m. June 8 during which he will read several poems from his book and talk about his art, done in a wide variety of media, with a guided gallery walk through.

“Strictly speaking, the purpose of this exhibition is to make available the originals of the fifty-nine paintings, prints, drawings and photographs reproduced in my recent book of poems entitled Fire Gate Poems: A Journey of Spiritual Healing. Since all of the book images, aside from the cover, are in black-and-white, the exhibition provides an opportunity to show those that were executed originally in color, and at their original scale.  Although some of the art predates my move to Los Alamos with my wife Helen in 1995, most of the poems were either written or extensively edited since that year.  The collection of poems is a response to the terrible experience of the death of our only son in June of 2000.

Accordingly, the poems are organized into five groups corresponding to the various stages of our recovery from grief.  They start with poems about “Origins,” followed then in “Abyss” by those written during the period of our most intense sorrow.  The poems of recovery begin in the third section, “Return,” and continue in the next two sections, entitled “Renewal” and “Wonder.”  All told, there are thirty-eight poems.

Only one of the art works was created with it’s accompanying poem in mind – “Raven Dies and Returns to Talk.”  The others were selected for what felt to me like their resonance with the poems they accompany.  Thus, they are not “illustrations” of the poems so much as subjective “evocations.”  Also, all of the art was created by me, with the sole exception of a small oil painting by my father done more than half a century ago.

In some ways the show is a “retrospective” —  not in the sense of thoroughly documenting the various “periods” and “styles” through which my art has evolved, but in the looser sense that works are included from over the last 33 years of my work as an artist.”

Finney’s first formal training as an artist occurred in many particular credit and workshop courses, started during graduate study.  Later on he continued classes during several residencies at the Vermont Studio Center (originally called the Vermont Studio School), where he met and studied with his most important teacher, the late James Gahagan, a protégé and then colleague of famous German abstract expressionist painter Hans Hoffman.  He completed an MFA in painting at Pratt Institute in New York City in 1994.

The exhibit will be on view June 3-29 during regular library hours:

Please visit our website for all the details: www.losalamosnm.us/library