How The Hen House Turns: Odd Pets In Los Alamos 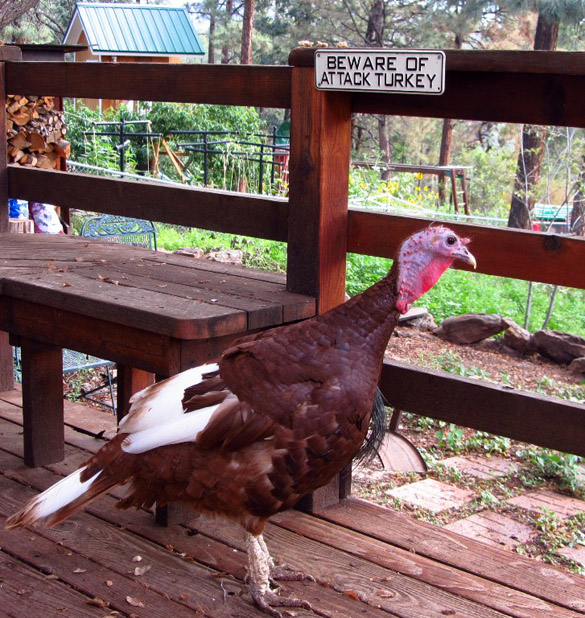 By CARY NEEPER
Formerly of Los Alamos
The history of animals in Los Alamos has been—what’s the right word?—interesting.
In the early days, it was said that Alice Westerfelt had a house goat. It was well-trained as to elimination, but untrainable in regard to eating everything that tried to grow (or lay neglected) in the garden. Like laundry on the clothes line.
Some people had pet pigs, I suspect, when the miniature Vietnamese potbellied pigs were popular. Now they’re called Teacup Pigs or micro-mini pigs or Juliana pigs or pocket pigs. (But some can grow to 100 lbs). I wonder if there are any in town now?
A few of us, in earlier days, had a skunk, perhaps an orphan found under the porch. (In which case you should call the New Mexico Wildlife Center at 505.753.9505.) We bought ours, which was quite legal decades ago, if they were five generations from the wild (a law meant to dilute out any possible rabies viruses). See past Hen House stories about our pet skunk, Streak. She was with us for at least eight cuddly years.
After that experience, loving as it was, we learned that wild animals should not be restricted to human dependence, unless they are rescue animals, of course. Their hormones kick in seasonally, and they suffer from being house bound, deprived of natural socialization and lessons on how to survive and freedom to be.
Turkeys are somewhere in between—not traditionally domesticated, but good pets if imprinted with humans as chicks. Turkey One was a good example—bonded to us after two solid weeks hunting grasshoppers with husband Don. The other turkey chick died, refusing to eat. We learned that commercial feeders run colored beads through the turkey chick feed, in order to stimulate their hunting instincts enough to eat.
Turkey One lived a long, happy life with us. When we appeared at the back door, she would run to us with an eager “awk awk awk” and hang out close by while we were outside. We had her every Thanksgiving dinner, as an honored guest.
When she matured, she challenged my alpha position in the flock by attacking the back of my hand. My reaction was an instinctive swat to her head. It resolved the issue then and then—a nice example of interspecies communication. We stayed close friends, and she never challenged me again, unlike Turkey Two.
Years later, I learned that T. Two would tolerate me only a short while in the Hen House yard. If I hung around too long, she would fluff up hugely and strut toward me. I respected the message enough to leave as soon as possible. Bopping her on the head didn’t work; in fact it aggravated her. But the worst mistake was spreading my bent arms in imitation of her threatening message. That nearly triggered a real assault. I had not bonded with her as a chick, for she was raised by a mother chicken.
Menu
Los Alamos
46°
Partly Cloudy
7:15am6:24pm MDT
Feels like: 43°F
Wind: 8mph WSW
Humidity: 53%
Pressure: 30.06"Hg
UV index: 0
WedThuFri
61/39°F
64/41°F
66/43°F
Weather forecast Los Alamos, New Mexico ▸