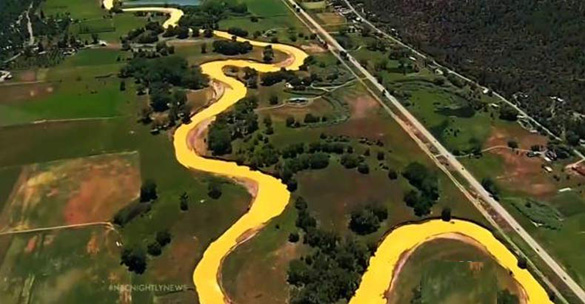 With apologies to the non-football fans, I wish to contrast the problems of Tom Brady and the under-inflated footballs to the recent three million gallon spill into the Animas River near Silverton, Colo.

I call that spill of acid mine drainage the “Orange Flush”, not to be confused with the Denver Bronco football defense, the Orange Crush.

The purpose of this short piece is to examine the facts regarding the spill and the environmental impacts.

But first the connection between the troubles of Tom Brady and the spill. Tom was accused of being involved in under-inflating the footballs so they were easier to grip, kind of like throwing a nerf football. He was suspended for four games, appealed to the Federal Court, and got the suspension thrown out. End of story.

The Orange Flush, however, continues to be a political over-inflated football still being kicked all over a number of western states and numerous Indian nations.

Several politicians call the spill an environmental disaster. The head of the New Mexico Environment Department wants the federal government to send money. He says that since the EPA caused the spill they cannot be trusted to present the facts truthfully. This is a scheme they have used for years to extract money from the DOE to monitor the DOE labs.

The president of the Navajo Nation wants money also for the alleged damage caused on the reservation. He says that the EPA cannot be allowed to get away with it and if they do not send money he will sue.

So, the over-inflated political football continues to get kicked all over the field. The kickers include our Congressman and Senators and many local politicians. I hope that an examination of the facts regarding the spill will take the air out of the football.

What is acid mine drainage?

Many of the mines had shafts and tunnels below the fresh water aquifers. During mining that water had to be continually pumped out. When the mine operations were discontinued the water continued to come into the tunnels. As the water became more acidic and as it dissolved some of the waste, it then leached out more metals from the rock formations.

Since there was a lot of iron, the color was reddish orange. The old-time miners called that liquid “Yellow Boy.”

It was a little over three million gallons of that yellow boy that the EPA contractor accidentally dumped into Cement Creek, which flowed into the Animas River, then the San Juan River, and finally into Lake Powell in the Colorado river system.

It should be emphasized that the color of the water has no relation to the toxicity, only to the iron content. However, it has been the delight of the photographers and the color makes it look toxic.

What were the toxic metals in the spill?

An easy way to remember the main toxic metals is to use the acronym CALM – Cadmium, Arsenic, Lead, and Mercury. There were many other metals in the spill but these four are the primary concerns.

The weight in the pounds of these metals released in the spill was:

The total pounds of liquid yellow boy released was about 24 million pounds. To put this into perspective, during the 120 years from 1871 to 1991, about 8.6 million tons of mine tailings were discharged into the Animas River.

The current release from the Gold King Mine, which was mostly water is a tiny fraction of what has been dumped into the river in the past 120 years.

The following are the drinking water standards for the four metals:

All of the units are milligrams per liter which is also approximately parts per million.

I will it as an interesting exercise for the reader to calculate how much above the drinking water standards the initial concentrations were in the yellow boy spill.

Now, what about the dilution factors as the spill flowed down the Animas, into the San Juan, and on into the Colorado River system at Lake Powell?

Another effect will be the precipitation of metals out into the sediment to the bottom of the stream, which increases the dilution factor even more. By the time the spill makes it all the way down through Lake Powell and Lake Mead any metals from the spill will not only be under the drinking water standards, they will not be detectable.

Further, it is very unlikely that any of the metals would have left the river and made it into aquifers along the river. What you have is a spill with almost zero environmental impact. The only damage would have been the closing of the Animas River for about six days to recreational use.

So then what is the political uproar all about? It is about politics as usual. People who are unhappy with the EPA see it as a chance to beat up on the EPA.

Finally what we need to do is to thank the EPA for demonstrating the power of dilution. The metals all came from the earth and this is an effective way to return them to the earth.