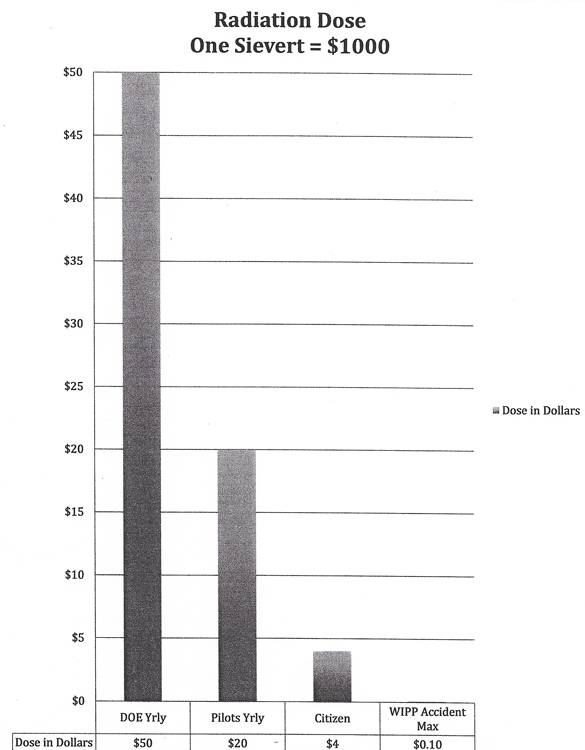 By LARRY JOHNSON
Los Alamos
Introduction:
There has been extensive media coverage of the February 2014 release of radioactive material at WIPP, which has resulted in the shutdown of the facility.
The purpose of this column is to examine the incident and point out that there has been a massive over-reaction to the release resulting in a tremendous waste of taxpayer’s money.
In more common terms it is “making a mountain out of a mole hill” and “much ado about nothing”. The incident should have resulted in a shutdown of the facility of no more than a week or two and then business as usual at the facility.
We will examine in some detail the radiation doses received by the workers and why there was nothing in the operational plans to accommodate releases as a part of the ordinary operations.
WIPP:
The name WIPP stands for Waste Isolation Pilot Plant and is totally inappropriate for the facility since it is now a permanent disposal of defense related to nuclear waste.
The proper name should now be Defense Nuclear Waste Disposal Site or more simply Nuclear Waste Disposal Site (NWDS). It is neither a plant nor a pilot plant.
Converting Radiation Doses To Currency Units:
In the United States radiation doses are still expressed in rems. In International units the unit of radiation dose is a sievert. The conversion is one sievert (Sv) equals 100 rem. A common unit of dose is a millirem (mrem; there are a thousand millirem in one rem).
Another useful conversion is that 10 millirem is equal to 100 microsieverts.
This is all very confusing to the lay public and to many scientists and engineers other than radiation safety professionals. I propose to use currency units for radiation dose. I will set one sievert equal to $1,000.
That makes a dose of one rem equal to $10 and a dose of one millirem equal to one cent. People seem to understand dollars and cents very well. I will use these currency units for doses in discussing the doses received from the WIPP radioactive material release of February 2014.
Radiation Doses from the WIPP Release:
I present a bar chart of radiation doses in currency units using the conversion factor one sievert equals $1,000. The maximum of the vertical scale is $50, chosen because that is the annual worker dose allowed for Department of Energy (DOE) workers.
NOTE: If, as a radiation safety professional, you are offended by the currency units for radiation dose, then the vertical scale maximum is just five rem.
Now, looking at the bar graph, the left hand bar is $50 of dose, the annual limit for DOE workers. The next bar is the allowed annual limit for airline pilots and crews. They use international units so the annual limit in those units is 20 millisieverts.
As an aside the radiation dose at 30,000 feet is about one-half cent per hour. A 10-hour flight gives you a dose of about five cents. The increase in radiation dose at higher altitudes is due to cosmic radiation, the higher you go the less shielding you get from the atmosphere.
When the U.S. Secretary of Energy flew from Washington to New Mexico to visit WIPP he received about five cents of radiation dose during the round trip. That is one half of the dose received by a worker at WIPP.
The next bar is the average dose received by citizens in the United States from natural sources of radiation, cosmic rays, radon radioactivity in the soils and medical radiation.
The last bar represents the maximum dose received by a WIPP worker from the incident in February 2014.
At first glance you cannot see a bar at all … look more carefully … it is there but the dose was only ten cents or ten mrem. That is one five-hundreth of the annual dose allowed for DOE workers. This really seems to be “making a mountain out of a mole hill” – “or much ado about nothing.”
Financial Consequences:
As a result of the WIPP incident Congress has allocated an additional $103 million. An estimate of another $500 million to restart WIPP, a proposed fine in excess of $50 million from the New Mexico Environment Department, and a total shutdown time for WIPP of one to two years.
All of these massive expenses come from the pockets of taxpayers.
I suggest that the DOE upper management has not done a reasonable job of managing the WIPP incident. They should re-open WIPP and move ahead.
Menu
Los Alamos
55°
Fair
6:59am4:51pm MST
Feels like: 54°F
Wind: 7mph SSE
Humidity: 23%
Pressure: 30.2"Hg
UV index: 2
SatSunMon
55/36°F
55/28°F
46/34°F
Weather forecast Los Alamos, New Mexico ▸