From Nazi Germany to the Manhattan Project: A Love Story

In a chilling story of her parents’ escape from Hitler’s reign of terror, Bettina Hoerlin reveals the depth and breadth of Nazism in pre-war Germany at a reading and signing at Otowi Station Bookstore on Saturday, May 12, at 3 p.m. 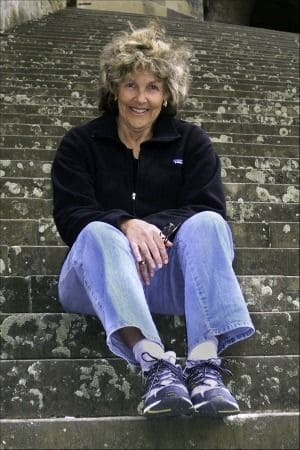 Hoerlin’s book, Steps of Courage, is a unique blend of historical and personal facts that documents how her parents overcome obstacles to their romance, one between an Aryan and Jew, and fight the nazification of culture, science and mountaineering. Spurred by a treasure trove of 500 love letters and untapped German archives, Hoerlin weaves together a tale playing against some of the most profound markers of the 20th century: Hitler’s Germany, the American immigrant experience, and growing threats of the nuclear age.

This true love story, revolving around two extraordinary individuals, plays out against some of the most profound markers of the 20th century: Hitler’s Germany, the American immigrant experience and growing threats of the nuclear age. Hermann Hoerlin and Kate Tietz Schmid met in 1934; he, a handsome world record-holding mountaineer and aspiring physicist, was a staunch anti-fascist and she, part of Munich’s intellectual and musical elite, was a stunning widow whose husband was murdered by the Nazis.

To have a future together, Hoerlin (as she called him) and Kate fled Germany. Standing in their way was a major obstacle, the Nuremberg Laws, prohibiting relationships between Aryans and Jews. Against formidable odds and with the direct assistance of a few “good” Nazis, Kate and Hoerlin managed to marry and immigrate to the United States. However, as “enemy aliens” during World War II, they faced new adversities. Life finally returned to normal with the help of influential friends, including a connection with Eleanor Roosevelt. And, in a strange twist, Hoerlin contributed to the war effort with his extensive European mountaineering maps that help guide Allied reconnaissance missions.

In 1953, Hoerlin and Kate pulled up stakes again, moving to the Atomic City of Los Alamos where Hoerlin worked at the forefront of the first nuclear test ban treaty. Again, he was brought under scrutiny, this time because of McCarthyism and Hoerlin’s links with the American left wing.

Bettina Hoerlin was born in the United States after her parents fled Nazi Germany; she grew up in Los Alamos. Hoerlin taught at the University of Pennsylvania for 17 years and also a visiting professor at Haverford College. An enthusiastic hiker and avid music lover, she lives in Philadelphia with her husband, physicist Gino Segre.

Otowi Station is a full-service independent bookstore serving Los Alamos and the region. Located adjacent to the Bradbury Science Museum, the store also offers museum items, science-based toys, and an extensive collection of books related to the Manhattan Project and historical Los Alamos. Biographers, including Bettina Hoerlin, are represented. The store welcomes s