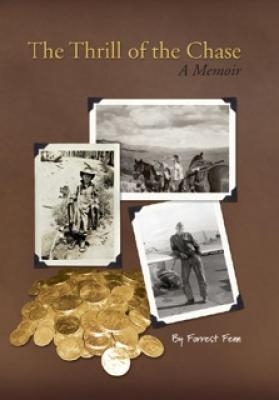 Forrest Fenn is the author of “The Thrill of the Chase: a Memoir,” as well as“The Secrets of San Lazaro Pueblo,” “Teepee Smoke,” “The Beat of the Drum and the Whoop of the Dance,” and “Historic American Indian Dolls.”

The memoir includes the true story about his secret treasure, along with an outrageous dare.

“Unlock the clues that are scattered among these pages and you can go home with a bronze chest that is so full of gold and precious jewelry that it’s almost too heavy for one person to carry,” challenges Fenn, adding that the book is dedicated to anyone who has known the thrill of the chase.

Fenn describes the 11th century treasure chest and the magnificent jewels and gold that he has hidden in the mountains north of Santa Fe, and offers clues for treasure-seekers.

Fenn has spent most of his 80 years in similar pursuits of passion, and now wants others to share in the thrill of that chase. That’s why he concealed the cache. All that will be needed are the clues, some resolve, a little imagination and luck.

There have been some unintended consequences of the treasure hunt, as some out-of-staters looking for the cache have gotten lost in the mountains and had to be rescued. Another man was arrested for digging for the treasure on state land. Forrest has gotten more than 16,000 emails about his memoir from people caught up in the thrill of the chase.

For many years, Fenn was the owner of one of Santa Fe’s finest art galleries, the Fenn Gallery. After retiring from the Air Force in 1970, Fenn built the art gallery in Santa Fe that he and his wife ran for 17 years.

Even though Fenn had never studied art, and at the time had never owned a painting, the Fenn Gallery became known as one of Santa Fe’s finest art galleries, with a collection that ran the gamut from Native American artifacts to world class oil paintings by Nicholai Fechin and other masters.

Since retiring again in 1988, Fenn’s energies have been directed toward excavation of a large Indian pueblo, and writing books about art and exploration. Fenn is a gifted storyteller who believes that the “story” about a painting or an object, can often be as important as the thing itself.