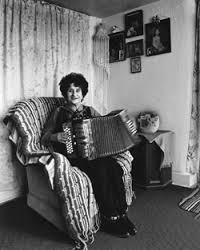 Antonia Apodaca/Courtesy photo
CHIMAYO MUSEUM News:
The community is invited to celebrate summer 1-5 p.m. Sunday, June 12 in beautiful Chimayo!
Enjoy performances of traditional northern New Mexico music under the giant cottonwoods with David Garcia and Friends, and Trio Jalapeño featuring the legendary Antonia Apodaca. Sample delicious homemade foods and tour the museum including our latest exhibit of incredible Don Usner photos of Chimayo’s lowrider community.
Family friendly and FREE! Chimayo Museum is located behind Ortega’s Weaving Shop just off County Road 98 (Juan Medina Road), near the intersection with Highway 76.
Presented by the nonprofit Chimayo Cultural Preservation Association, chimayomuseum.com, 505.351.0945.
Antonia Apodaca (born Nov. 1, 1923) is an American musician and songwriter known for her performances of traditional New Mexico music. She came to wider prominence through her performances in the La Música de los Viejitos and Nuestra Música festivals in Santa Fe, the festival’s nationally circulated radio broadcasts, and her appearances at the Smithsonian Folklife Festival.
Apodaca was born in Rociada, a village in San Miguel County, New Mexico. Her parents, José Damacio Martinez and Rafaelita Suazo Martinez, were both musicians from families of musicians. Her mother played the accordion and guitar and her father the guitar, accordion, and violin. They had a small band which entertained at local dances and weddings.
Antonia taught herself to play the accordion as a child, initially on a broken one she had rescued from the trash. Her mother and uncle continued teaching her, and by the time she was a young teenager she won an accordion contest in Santa Fe where she had competed against adults. She was also taught to play the guitar by father.
At the age of 18, she met her future husband Macario “Max” Apodaca, a fiddler from Carmen (a village near Mora, New Mexico) who had asked to join her parents’ band. They married two months later and in 1949 settled in Wyoming where Max got a job in the uranium mines. They were to live in Wyoming for the next 30 years and raise their five children there. Max played with a band of German musicians in Wyoming for several years, and he and Antonia continued to perform together for both the Hispanic and Anglo communities at dances and local events. Apodaca later recalled how she and her husband had learned how to adapt the traditional Hispanic polkas and waltzes to a Western rhythm when they played for the Anglos.
In 1979 the couple returned to Rociada to live in the house where Antonia was born and had grown up. Max Apodaca died in 1987 and Antonia ceased performing. A year later, the New Mexican folk violinist Cleofes Ortiz convinced her to return and she went on to perform extensively with Bayou Seco (the folk musicians Ken Keppeler and Jeanie McLerie) and later formed her own group, Trio Jalapeño. Trio Jalapeño is comprised of Antonia Apodaca on guitar and accordion, David Garcia on guitar, and Bernardo Jaramillo on the string bass. She has received numerous awards including the New Mexico Governor’s Award for Excellence in the Arts in 1992, the same year she had appeared at the Smithsonian Folklife Festival in Washington, D.C..
In December 2010, her house in Rociada burned to the ground destroying what the National Hispanic Cultural Center termed “decades of musical history and treasured instruments.” She escaped with only her guitar and two accordions.
After the fire, Apodaca moved to nearby Las Vegas and has continued to perform with Trio Jalapeño. Their concerts often include her own compositions, of which one of the best known is “Estas Lindas Flores” (These Beautiful Flowers). In 2011 she was awarded the Premio Hilos Culturales, an annual award presented to folk artists from New Mexico and Colorado “who have distinguished themselves in their communities as folk musicians or folk dancers of traditional southwest styles of Canciones Del Pasado or Bailes Antiguos.”
Menu
Los Alamos
90°
Fair
5:49am8:25pm MDT
Feels like: 90°F
Wind: 11mph NW
Humidity: 9%
Pressure: 30.07"Hg
UV index: 5
MonTueWed
84/57°F
90/66°F
86/64°F
Weather forecast Los Alamos, New Mexico ▸