Enriching the Picture of the Immigrant Experience

Stephanie Sydoriak will sign the biography of her parents, An Ocean Between: 100% American – 100% Ukrainian, on Thursday, April 26, at 6 p.m. at Otowi Station Bookstore. 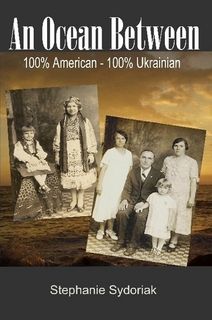 In a recent interview, Sydoriak discussed her approach to writing the biography of her parents. Her main sources were her father’s scrapbook and the stories her parents told her. “The only research I did was to look through my father’s thin scrapbook which held some newspaper articles concerning him or the Ukrainian community in Boston. I went to Ukraine in 1990, just as the Soviet Union was crumbling and Ukraine had decided to declare its independence. I saw for myself the patriotic fervor that my father had brought with him to America, and the beautiful countryside that my mother talked about with such love. The older generation had all died, so I didn’t get stories of my parents, but I listened to stories of the World War II battles that went back and forth through their town.”

Sydoriak also interviewed a close family member. “I interviewed my aunt, my father’s sister, who came once to visit us, and as she listened to my mother’s stories, she cautioned me to take some of the stories of my aunt’s mother, my mother’s mother-in-law, the infamous Anyelka, with a grain of salt.”

Many children have the experience of hearing about a few specific stories over and over, roll their eyes and think, “I’ve heard that story a hundred times!” That didn’t happen in Sydoriak’s house. “My parents told their many, many stories to me throughout my lifetime. Some were poignant, some funny, some sad. Both my parents had a dramatic way with words, though their style was different, so I was never bored. These stories took the place of bedtime and fairytales that today’s youngsters enjoy. My father’s stories stopped with his death in 1961, but my mother lived to be a hundred. She and my sister came to Los Alamos about ten years before her death, so again I heard the same stories. This time around, I took the opportunity to ask her about the context as well as fixing the stories into a timeline.”

She continued, “My parents were very open. They seemed to want me to understand their lives. Stories they thought were unsuitable for a young child were told to me as an adult. They wanted me to see Ukraine, their town, the countryside, the people. As I grew older, I began asking questions about differing parts of their stories, and they had no hesitation to explain. I don’t think I learned anything new, but getting the stories into that timeline and context with what was happening in the world gave me a deeper understanding of what they had experienced.”

When asked how writing and publishing the biography affected her own sense of identity, Sydoriak replied, “I could see how my father’s intense Ukrainian patriotism along with his American patriotism had become mine in my adult years. My mother’s love of her Ukrainian culture, the singing, dancing, embroidery and egg-making likewise became my own just because of her persistent telling about them. Having to work two jobs in the Depression, she had no time to instruct me in any of these things, so I absorbed them from the community.”

An Ocean Between will bring readers new insight into the immigrant experience, Sydoriak said. “America is always thought of as a melting pot, but that was not the process my parents, my sister and I went through in our different ways. They came with no English, no understanding of American money, and a profound distrust of American society in the Roaring Twenties. They came with very little money and so had to live stressfully in the slums. Instead of interacting with Americans, they clung to the Ukrainian community, especially the one at their church, where they could speak their familiar language, sing their songs, and worship in the Ukrainian rite of their childhood.”

She concluded, “My father was a leader who made the love of all things Ukrainian his major message to the community. My sister and I, trying to function in our American world learned that it was almost impossible to explain that Ukraine existed (school maps didn’t show it), or explain why we weren’t in school on January 6, which is Ukrainian Christmas. And perhaps my parents’ stories can inform people of the value in the working together of many cultures within the bounds of our shared democracy.”