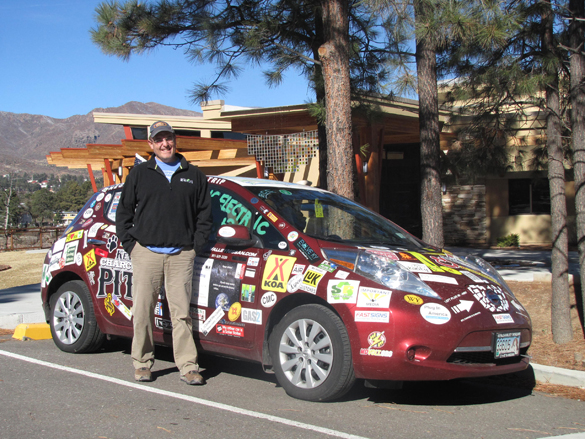 Brian Kent and his electric car this morning during a visit to the Los Alamos Nature Center. Photo by Chris Clark/ladailypost.com

By Rebecca Shankland
Los Alamos
Brian Kent, tired of hearing people say that they couldn’t take road trips in their Leaf all-electric vehicles, decided to drive his Leaf cross country, visiting every state capital, and even planting trees in every state to offset the small amount of carbon required to generate electricity for the vehicle.
Wednesday Kent checked his charging station possibilities and found one at the Los Alamos Nature Center. He likes to charge at locations where there is something interesting to do while he waits, and this fit the bill.
Kent’s cross-country trip is now at 17,310.5 miles, and his next stop will be Albuquerque, then the Grand Canyon. In between cities, he charges at KOA campgrounds, using an adaptor  that allows him to charge from an RV charger. KOA was pleased to help sponsor his trip. His car is covered with stickers from the many other groups, such as PEEC, that have helped him along the way.
If he gets a courtesy charge from individuals, he thanks them with one of the $2 bills that he bought from US Bureau of Engraving and Printing–the signing of the Constitution is shown on the back of this bill.
Kent’s car features lots of slogans, such as “Which would you rather pay? $200 a month for gas or $35 a month for electric?”
To follow his 26,219 mile Negative Carbon Road Trip, go to www.evchargehub.com/negativecarbonroadtrip. 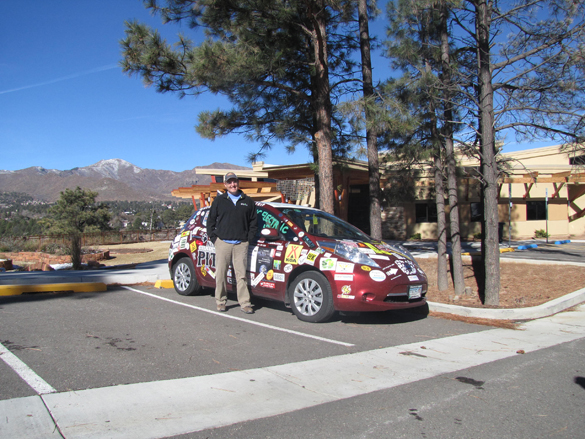