NASA’s Curiosity rover has landed on Mars. Curiosity is a car-size, one-ton rover that touched down on Mars at 11:31 a.m. Monday. The landing marks the beginning of a two-year prime mission to investigate.

Courtesy Photos. First photos sent to NASA from Curiosity within minutes of landing on Mars.

Its descent-stage retrorockets fired, guiding it to the surface. Nylon cords lowered the rover to the ground in the “sky crane” maneuver. Nearly 400 people gathered at the Bradbury Science Museum to watch the direct feed from NASA television and celebrate the historic event.

LANL was involved with the development of the ChemCam aboard Curiosity. The ChemCam instrument on the science laboratory rover will help determine rocks and soils on Mars have been altered by water and contain chemicals necessary for life. More information about ChemCam is available at
http://www.msl-chemcam.com/index.php. 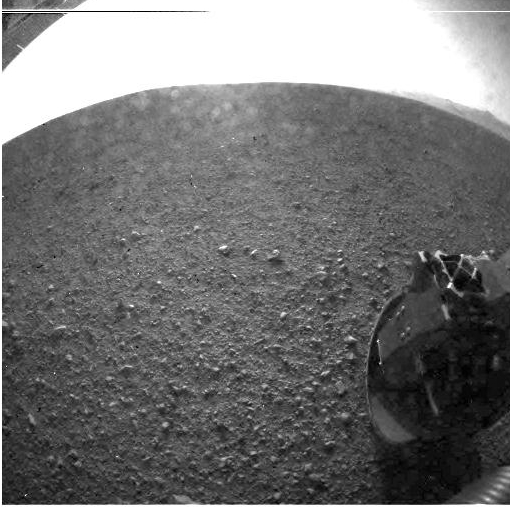 This is one of the first images taken by NASA’s Curiosity rover, which landed on Mars the evening of Aug. 5 PDT (morning of Aug. 6 EDT). It was taken through a “fisheye” wide-angle lens on the left “eye” of a stereo pair of Hazard-Avoidance cameras on the left-rear side of the rover. The image is one-half of full resolution. The clear dust cover that protected the camera during landing has been sprung open. Part of the spring that released the dust cover can be seen at the bottom right, near the rover’s wheel.

On the top left, part of the rover’s power supply is visible.

Some dust appears on the lens even with the dust cover off.

The cameras are looking directly into the sun, so the top of the image is saturated. Looking straight into the sun does not harm the cameras. The lines across the top are an artifact called “blooming” that occurs in the camera’s detector because of the saturation.

As planned, the rover’s early engineering images are lower resolution. Larger color images from other cameras are expected later in the week when the rover’s mast, carrying high-resolution cameras, is deployed.