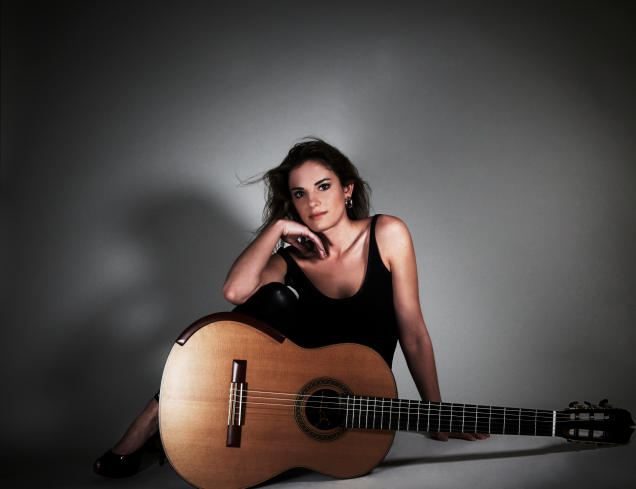 Croatian classical guitarist Ana Vidovic performs Feb. 20 at the NHCC in Albuquerque. Courtesy/anavidovic.com
NHCC News:
Award winning, Croatian classical guitarist Ana Vidovic will perform at 7:30 p.m. Saturday, Feb. 20, at the National Hispanic Cultural Center in the Albuquerque Journal Theatre.
The event, part of the Center’s Chispa: Latino Music Season and the seventh performance in the popular Pimentel Concert Series, is presented in partnership with Pimentel Music.
From the small town of Karlovac near Zagreb, Croatia, Ana Vidovic began playing guitar at the age of five. She gave her first public performance at seven, began performing internationally at 11, and at 13 became the youngest student to attend the prestigious National Musical Academy in Zagreb.
Her reputation in Europe led to an invitation to study with Manuel Barrueco at the Peabody Conservatory, where she graduated in 2005. She has given over 1,000 public performances, touring globally with concerto performances and recitals.
Her numerous awards include first prizes in the Albert Augustine International Competition in Bath, England, the Fernando Sor competition in Rome, and the Francisco Tárrega competition in Benicasim, Spain.
She was featured in three television documentaries by eminent Croatian film director Petar Krelja, and has had two DVDs released by Mel Bay Publications, Guitar Artistry in Concert and Guitar Virtuoso.
The Pimentel Concert Series is presented in tribute to the founders of Pimentel & Sons Guitarmakers, the late Lorenzo Pimentel and his wife Josefina, who have provided world-class custom guitars to musicians worldwide for over half a century.
The National Hispanic Cultural Center is dedicated to the preservation, promotion, and advancement of Hispanic culture, arts, and humanities, and is a division of the New Mexico Department of Cultural Affairs.
Tickets are $25, $35 and $45, and are available from the NHCC Box Office, 505.724.4771 or www.nhccnm.org. For more information about this show or other events at the NHCC, call Alberto Cuessy at 505.238.2695 or e-mail alberto.cuessy2@state.nm.us.
Menu
Los Alamos
37°
Sunny
6:56am4:51pm MST
Feels like: 37°F
Wind: 2mph NNE
Humidity: 46%
Pressure: 30.15"Hg
UV index: 1
WedThuFri
59/36°F
57/36°F
55/32°F
Weather forecast Los Alamos, New Mexico ▸