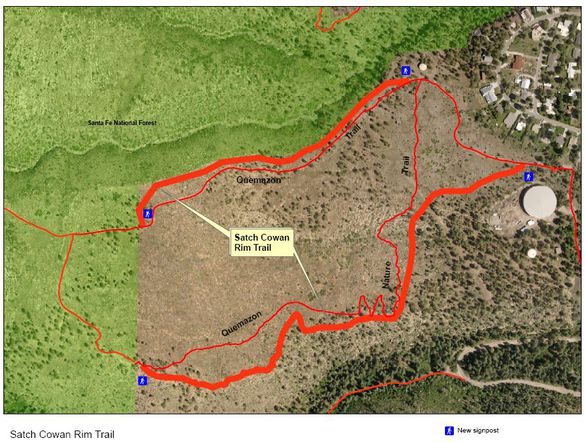 LOS ALAMOS COUNTY News:
Los Alamos County held a public hearing Tuesday evening regarding a recent citizen petition to name or rename a trail in the Quemazon Trail Complex in the Western Area after deceased local resident and hiking enthusiast Helen “Satch” Cowan.
After hearing public comments, the Committee discussed the request and asked several questions of the petitioners, as well as to County Open Space Specialist Craig Martin, before unanimously voting 6-0 in favor of naming a new trail the “Satch Cowan Trail.”
The Committee emphasized in the motion and in comments before the vote that it was not in favor of changing the name of the existing Quemazon Trail or nearby Quemazon Nature Trail.
The petitioners had indicated in their comments that renaming these two trails was not their intention.
Many public comments that had been received in advance of Tuesday’s public hearing were strongly against renaming either of the two trails, with the majority of commentors stating that the names of the trails had been in existence for many years and should not be changed.
As demonstrated in a map provided by Martin during the meeting, the new trail that could be named for Cowan parallels portions of the existing Quemazon trail near the canyon edge, and is already in existence and has been hiked for years as a “social trail.”
Thus, the new trail would result in a double rim trail offering hikers two routes they could take as they hike the popular Quemazon trails network.
If approved, the County would incorporate the Satch Cowan Trail into its open trails network system and update trails maps.
The County would then be responsible for future maintenance of the trail, although as Martin stated during the meeting, most of the newer trails created today are completed with “low maintenance” in mind.
Students from Mountain Elementary School’s fifth grade classes would help build the new trail this fall, and the petitioners stated that a fund of approximately $7,000 in donations to a memorial fund would pay for improvements.
No request for additional money would be made to the County.
A small wooden sign at the beginning of the trail, as well as small, simple markers at five separate junctions along the way would denote the new trail.
The Quemazon trails guide would be updated to include the new trail and information about Satch Cowan.
Naming of the new trail must still be approved by the County Council.
The Committee’s recommendation will be forwarded to the Council for consideration at its meeting at 7 p.m., June 26 in the Community Building, 475 20th St.
To view minutes of the public hearing, the map of the proposed trail, or background information such as the petition for the new trail, visit the County’s News page at www.losalamosnm.us.
Menu
LOS ALAMOS