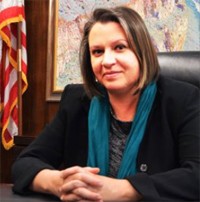 ALBUQERQUE — New Mexico is again ranked 50th in the nation for child well-being according to the national Kids Count Data Book, a 50-state report released Monday by the Annie E. Casey Foundation.

New Mexico Commissioner of Public Lands Stephanie Garcia Richard, on behalf of the Vote YES for Kids campaign, responded to the results in a video statement where she urges New Mexicans to support Constitutional Amendment No. 1, which will appear before voters in November, as a path to make 2022 the last year that New Mexico ranks at the bottom of this list.

“In the national Kids Count Data Book, a 50-state report released today by the Annie E. Casey Foundation, New Mexico is once again ranked dead last in child well-being. This report analyzes how children and families are faring, and we are 50th, again.

“As a public school teacher, I know the value of investing in our kids. I know what a dollar means to a classroom–it can mean the difference between success and failure.

“The report shows that we are doing better than we were 5 years ago, but families and children are still struggling and there is more we can do. New Mexico sits on one of the wealthiest Permanent Funds in the Country – the Permanent School Fund is valued at nearly $26 billion.

“I can think of no better investment or use of our Fund than using it to support our youngest New Mexicans and their families.

“In the November election, we can vote to approve Constitutional Amendment No. 1, an opportunity for New Mexicans to expand the use of our Permanent School Fund to invest in our families, communities, and kids during their earliest years.”

This November, New Mexico voters have the opportunity to approve Constitutional Amendment No. 1 to allocate roughly $150 million from the state’s Permanent School Fund every year to the Early Childhood Education and Care Department for early childhood education and about $100 million to the Public Education Department to improve educational outcomes for at-risk students.

If approved, this would bring transformational change and level the playing field for hardworking New Mexico families, giving all of our kids, regardless of family income, a fair shot at educational success.

Vote YES for Kids! is a New Mexico Political ommittee organized to urge voters to support Constitutional Amendment No. 1 that will appear on the November general election ballot.