CIR And Creativity For Peace Present Dinner And Film: Beyond Right And Wrong Nov. 11 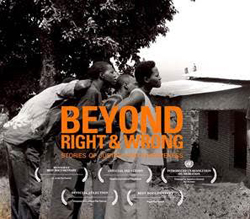 CIR News:
Join the Council on International Relations 5-9 p.m., Wednesday Nov. 11, for an impactful evening that includes dinner at Lulu’s Chinese Cuisine, 3011 Cerrillos Road accompanied by the film, “Beyond Right and Wrong”.
The evening begins with a Happy Hour/Cash Bar at 5 p.m. followed by buffet dinner at 5:30 p.m., introduction of panel at 6:30 p.m. and film showing from 7:30 to 8:30 p.m. (film is 52 minutes).
The evening concludes with a post-screening discussion facilitated by CIR member, Rob Reider and panel members: Tom McDermott, Former UN official (Troubles in Northern Ireland) and Dottie Indyke, Executive Director CFP (Israeli/Palestinian conflict).
Beyond Right and Wrong is a 2012 American produced award winning documentary film about restorative justice and forgiveness.
The film depicts victims and perpetrators of the Rwandan Genocide, the Israeli-Palestinian conflict, and the Troubles In Northern Ireland.
Other features of this well made and provocative film include discussions of justice after the Rwandan genocides, of grass roots movements on both the Palestinian and Israeli sides to stop the Israeli occupation, forgiveness issues after the troubles in Northern Ireland, and common cross-national cause and bonds of family and community.
Beyond right and wrong is a fascinating title because it captures something of the complex moral ambivalence many of us feel towards forgiveness.
It is an uneasy feeling one can have with forgiveness itself that the scales of justice require some sort of balance. That is crime needs to be offset by the right amount of punishment.
But forgiveness ignores all of that, which is why it exists beyond right and wrong. What is difficult is the refusal of revenge; that is the refusal to answer back in kind.
The film examines powerful stories of ordinary people in Northern Ireland, Rwanda, and Israel/Palestine who have let go of perfectly natural punitive instincts in the name of a better tomorrow—one not trapped by the hatreds of the past.
Lulu’s Chinese Cuisine review:
“The only real Chinese in New Mexico..? After moving to NM from So. Cal, I was really disappointed with the Chinese food in this state. I had pretty much given up on it. I saw this place with a grand opening sign up and figured it couldn’t hurt to try, and I was glad I did. First off, you know it’s going to be good when your order is written down in Chinese by the waitstaff. I’ve tried several dishes here on several occasions, and each one has been excellent (Kung Pao Beef, Orange Chicken, Sesame Chicken, Sweet & Sour Chicken, Egg Flower Soup, Hot & Sour Soup, Mushuu, Wontons, Spring Rolls, Fried Rice…) …this is one great restaurant.”
Cost for the Prix Fixe evening (including dinner, film and donations to CFP and CIR) is $45. Advance reservations are required. Reserve by Monday, Nov. 9 at: www.sfcir.org or telephone the office at 505.982.4931.
Menu
Los Alamos
57°
Fair
7:21am6:17pm MDT
Feels like: 55°F
Wind: 9mph W
Humidity: 27%
Pressure: 30.11"Hg
UV index: 0
MonTueWed
70/46°F
52/34°F
54/36°F
Weather forecast Los Alamos, New Mexico ▸