By CYNTHIA BIDDLECOMB
Los Alamos
“The Big Short” could be the most important film of 2015. It exposes the risky financial under-girdings of our capitalist system where the key players, big banks, are expected to play by the rules and don’t.
Greed is the central motivator and some level of gambling is inherent. Yet our nation is dependent on this corrupt system.
The film dramatizes the 2005-2007 events leading up to the burst of the housing bubble. We lived through the foreclosures and the bank losses, the market failures and government bailouts. But do we really understand just what level of greed, neglect and corruption caused our worst global economic disaster since the 1930s?
Christian Bale (The Fighter) plays Michael Burry, an eccentric, one-eyed, former neurologist with autism, now the hedge fund manager for Scion Capital, who figures out that the mortgages on which the housing market is based are failing at an alarming rate. He predicts complete failure of the system and takes his prospectus to the big banks, asking to invest against the banks (in a credit default swap); they are only too happy to take his money, believing themselves too big to fail. 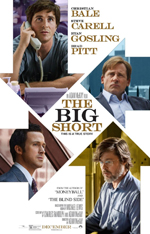 A fund manager from one of the banks, Jared Vennett (Ryan Gosling), who narrates the film, gets wind of Burry’s investments and tries to invest as well. But by placing a wrong number within Morgan Stanley his call lands in a hedge fund office, FrontPoint Partners, where Mark Baum gets the gist of Vennett’s scheme. Baum (Steve Carrell), seen as a visionary by his cohort (played by Jeremy Strong, Hamish Linklater, and Rafe Spall among others), is an idealist fed up with the corruption in the finance industry. Vennett’s wrong number motivates Baum to bet against the banks, seeing their faith in the mortgage market as blind and stupid.
Two “garage band hedge fund managers” from Boulder, Colorado, Charlie Geller (John Magaro) and Jamie Shipley (Finn Whitrock), while visiting Chase Bank, see a prospectus from Burry and study up on his predictions. They interest a former financier who has fallen off the grid, Ben Rickert (Brad Pitt), in backing them so they can invest with the big banks. He does so out of a desire to stick it to the system.
All three of these story lines interleave as the dread deadline of May 2007 approaches. The film has amusing vignettes in it to help us understand the terms and concepts being bandied about. Time passes with segues showing what elements of culture or technology were distracting the populace from seeing the danger our economy was facing. These clips and vignettes are quite effective, even while being tongue in cheek. Film clips remind us that 8 million people lost jobs and 6 million lost homes.
Everyone should see this film to understand the level to which we are all complicit in the financial system, which props up our nation and the world’s economy. Do note, however, that The Big Short is rated R for pervasive language and nudity.
Menu
Los Alamos
43°
Fair
6:57am4:51pm MST
Feels like: 41°F
Wind: 5mph NNE
Humidity: 30%
Pressure: 30.34"Hg
UV index: 0
WedThuFri
59/36°F
57/36°F
57/34°F
Weather forecast Los Alamos, New Mexico ▸