By CYNTHIA BIDDLECOMB
Los Alamos
“Dr. Strange” is the latest Marvel graphic novel to come to the screen.
This one provides the backstory for the hero of the same name. Marvel comic book readers will know, that Dr. Stephen Strange is an egotistical human being, a much cele 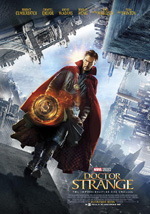 brated, though thoroughly arrogant neurosurgeon.
As we see in this movie, his hands were permanently damaged in a car accident, one he ought not to have survived at all. Of course, without the skilled hands he once had, his prospects of returning to neurosurgery are dim.
Stephen Strange learns from his physical therapist about someone who found a way to his own healing after a spinal cord injury. Strange finds the guy and learns from him of the path he took to renewal. He travels to the place, a monastic retreat based on an Eastern philosophical path, complete with martial arts and sorcery training.
Strange is skeptical but desperate. Humility is not his strong suit, but he comes close, recognizing his need. As he devours the mystical texts in the center’s library, his sorcery skills improve, though his basic understanding is still limited. Eventually, Strange is pulled into an epic battle to save the planet (it is Marvel, after all).
Benedict Cumberbach (the BBC’s Sherlock), with an American accent, plays Stephen Strange. Can we think of anyone else who can pull off the arrogance of this character? His teacher is called “the Ancient One”, played by a bald and typically mystical Tilda Swinton (the White Witch in the Chronicles of Narnia). Her right hand man, Mordo, is played convincingly by Chiwetel Ejiofor (12 Years a Slave). Benedict Wong, Rachel McAdams and Benjamin Bratt also have starring roles in the film.
The coolest part of the movie has to be the special effects. It is highly recommended that you see it in 3D if you have a choice. The multiple realities created by the sorcerers in the film are all due to incredible 3D artistry and use of color. The locations for the film include a hospital surgical theater, and scenes in the cities of Kathmandu, Nepal, Hong Kong, New York and London.
The battle between good and evil is basic to these Marvel stories, though the characters in each are often complex. Not that one need take these complexities too seriously. But fans of the genre do. That being said, you need not be a devotee of graphic novel superheroes to enjoy this film.
Be advised: as with most of the Marvel movies of late, the end credits are interrupted by a teaser for a future Marvel film, in this case, Dr. Strange has a moment with another Marvel superhero. But don’t leave yet; there is another teaser at the very end of the credits, as well!
Dr. Strange is “Rated PG-13 for sci-fi violence and action throughout, and an intense crash sequence”; younger than thirteen may have difficulty following the plot.
Menu
LOS ALAMOS