On Thursday, the library will screen writer/director Kar Wei Wong’s “Chungking Express,” a nineties movie that feels like a nineties movie. Having “come of age” in the nineties, I mean that as a compliment. I like flannel shirts mixed with impressionistic psychotic love. And, it turns out – no offense to my Seattle-born (go figure) Anglo husband – I sometimes like Chinese men.

This is a great movie, but to be honest, it took me a long time to realize it. I was well into the film before I started to understand and care about its very messed up characters. 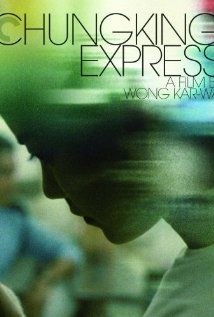 In some cases, it was easy, such as with the afore-mentioned Chinese men, by which I actually mean man, or much more specifically, Cop 663, played by Tony Liung Chiu Wai. I enjoyed seeing a man underdressed and a little sexually objectified on the screen, but it was more than that. His character’s warmth, strength, and instinctive tenderness overwhelmed me at times.

But other characters made liking them more difficult. There is Faye (Faye Wong), obsessive and dangerous; Cop 223 (Takeshi Kaneshiro), also obsessive but more weepy and sentimental than dangerous; and finally “Woman in blonde wig” (Brigitte Lin), who, in her wig, raincoat, and sunglasses, is impossible to see. Her character is deliberately inscrutable, I get it – but it’s hard to connect with someone when you can’t tell anything about her.

And that takes me back to my original observation: This is a nineties movie. And apparently the nineties were the same, whether you were in the U.S. or in China.

Like some of the filming and most of the characters in “Chungking Express,” the nineties were hard to connect with but sort of gorgeous, too. Lyrics lost their meaning. Fashion sense disappeared. People brooded, but not necessarily about anything. Everyone seemed misplaced, out of step, and at the same time, a little smug. Irrationality can be intoxicating, and “Chungking Express” has lots of it, with the tiniest bit of 21st century optimism thrown in.

Simply said, “Chungking Express” is about love, losing it (in every sense of the phrase), and un-losing it – that is, not necessarily regaining it but at least making room once again.

It screens at 6:30 p.m. Thursday in the upstairs meeting room theater at Mesa Public Library as part of the Free Film Series, which focuses this season on foreign films. Without Friends of Mesa Public Library, this trip through time and space would never be possible.